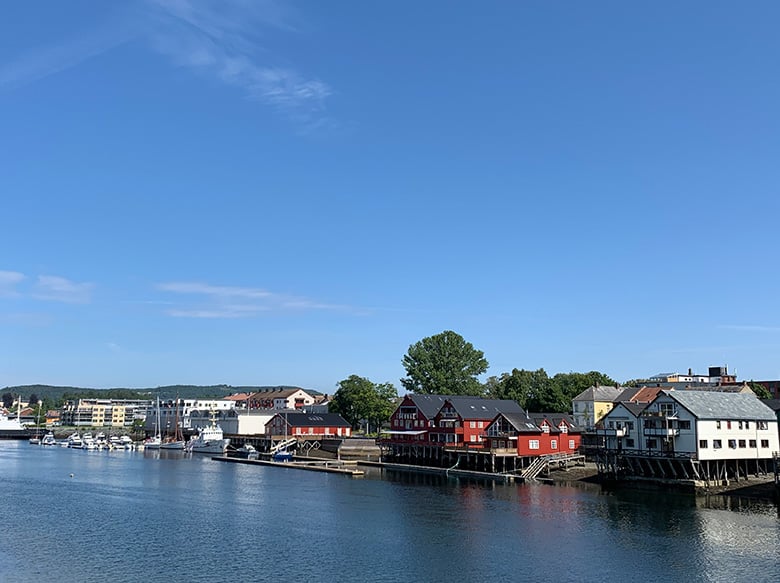 A short train ride from Trondheim, Levanger is a family-friendly waterfront town that makes a nice relaxing summer day out.

July is a lovely time to stay in Norway. While half the country disappears, I can get work done in peace and quiet, enjoying the long sunny evenings. When the sun appears, of course, which hasn't been very often this year! I much prefer to take my holidays in October-December when the Norwegian weather is at its worst.

Another advantage in working during July is there's less distractions (client calls) meaning you get work done much quicker. This leaves time for spur-of-the-moment activities, like a day trip to Levanger!

Why Levanger? Good question. I wanted somewhere easy to get to from Trondheim, preferably on the train and with something of interest to see and then write about.

After a discussion with a few people who lived in the region, Levanger seemed a good pick. A nice waterfront location, walking paths, old wooden centre, and hourly departures on the train. Off I went…

The small town is located on the Trondheimsfjord, the same body of water that touches Trondheim city centre. Living in the city it's sometimes easy to forget that the fjord is one of Norway's biggest.

The town is part of the traditional region known as Innherred. While there is no administrative region here anymore, there is a tourist-facing organisation called Visit Innherred. This means that when looking through the local tourist information brochure you are constantly trying to figure out if a museum is in Levanger or another town 50km away.

This obsession with boundary-drawing is one of the most frustrating things about the Norwegian tourism industry! Innherred doesn't mean anything to an international visitor. When visiting Levanger for a day, who wants to see a page of ‘museums in Innherred' and then have to spend ages figuring out which ones are near Levanger? Anyway, I digress…

The train trip on the Trøndelag commuter line

The town is part of Trøndelag, the vast county that covers much of central Norway. As such, it's well served by public transport. The primary form is the Trøndelag commuter line (Trønderbanen) that links major towns of Trøndelag with Trondheim and the international airport.

I'm a regular user of the train from the city centre out of the airport. To reach Levanger, I simply stayed on the train for another 45 minutes or so. Easy! The cost for the one-way trip was around 180 kroner, double what it costs to get to the airport. There is no catering on the train, just a small coffee machine that takes Norwegian coins or debit/credit cards.

One of the most distinctive buildings in all of Trøndelag let alone Levanger, this beautiful station building is the first thing you see when arriving on the train. 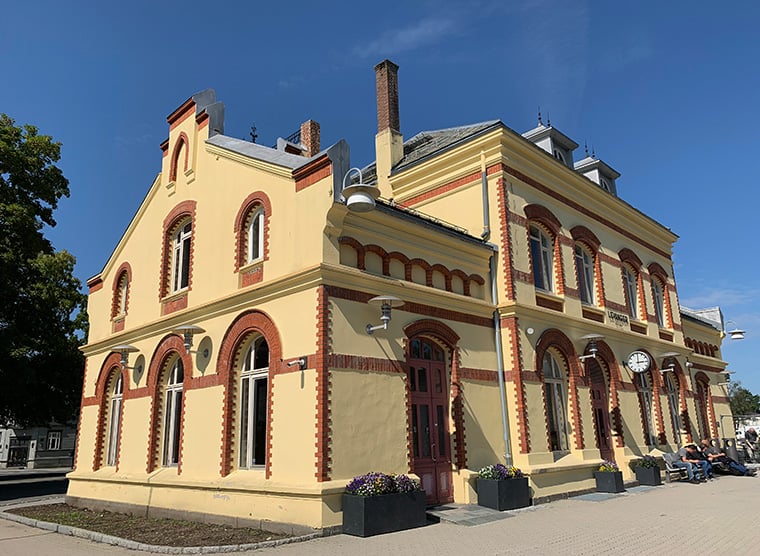 It makes a terrific first impression! Opened alongside the station itself in 1902, the station building was designed by prominent Norwegian architect Paul Due.

After returning to Norway from many years working in American cities, Due designed several notable railway stations. The eye-catching stations at Hamar and Lillehammer are among his best work. 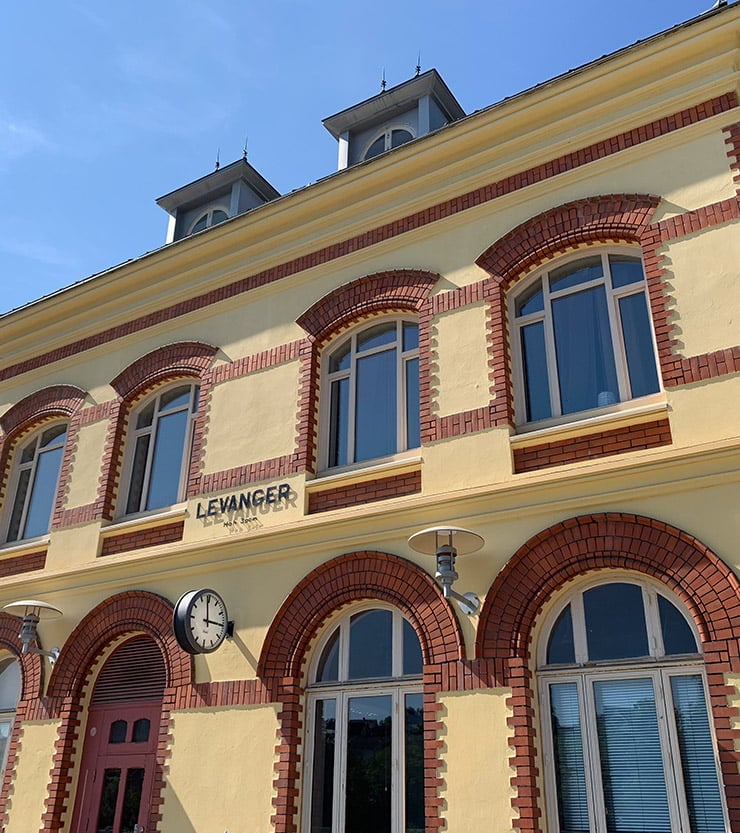 Inside is a little disappointing, however! The waiting room is cold and unwelcoming, and there isn't a shop or any other services aside from two automated ticket machines. There are however, clean restrooms, which is very useful on a day trip!

The lack of services doesn't really matter however as the town centre is right there behind the building.

The compact centre of town is known for its old timber buildings, helping Levanger retain a traditional charm. It certainly gives the town a unique identity. One of the main streets has been partly pedestrianised and there are a couple parks and other green spaces dotted around. 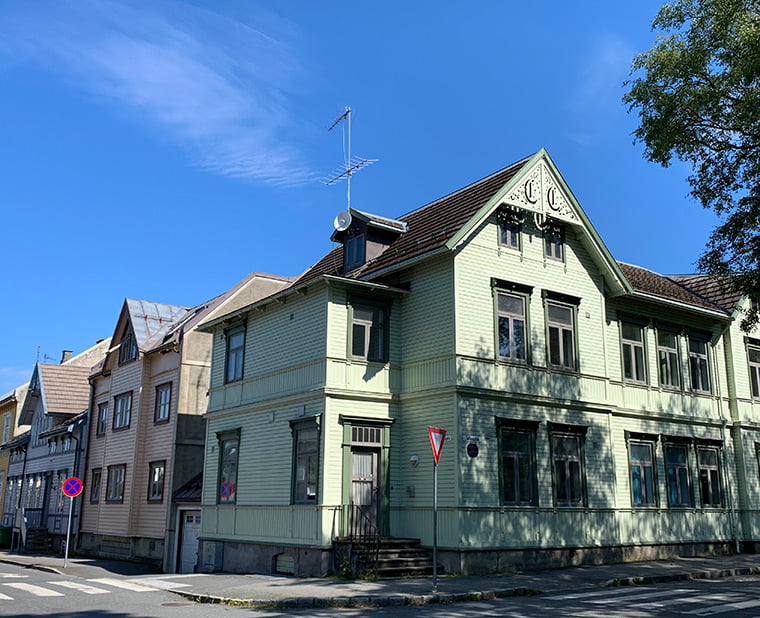 Levanger suffered from serious fires in 1846, 1877 and 1897, each time destroying varying amounts of the wooden centre. Despite this, the town centre was always rebuilt predominantly with wood. Many of the buildings standing today were built after the last great fire, so are more than 120 years old.

Something I only discovered upon my return to Trondheim is that Levanger is a member of the Italian movement known as Cittaslow.

Inspired by the slow food movement, Cittaslow's goal is to improvethe quality of life in small towns by slowing down its overall pace. This is especially so with respect to how towns and cities use spaces, including the flow of people and traffic.

This explains a lot about the development of the coastal area of the town, which is what impressed me most.

Either side of the town centre there are waterfront paths that are great for walking. 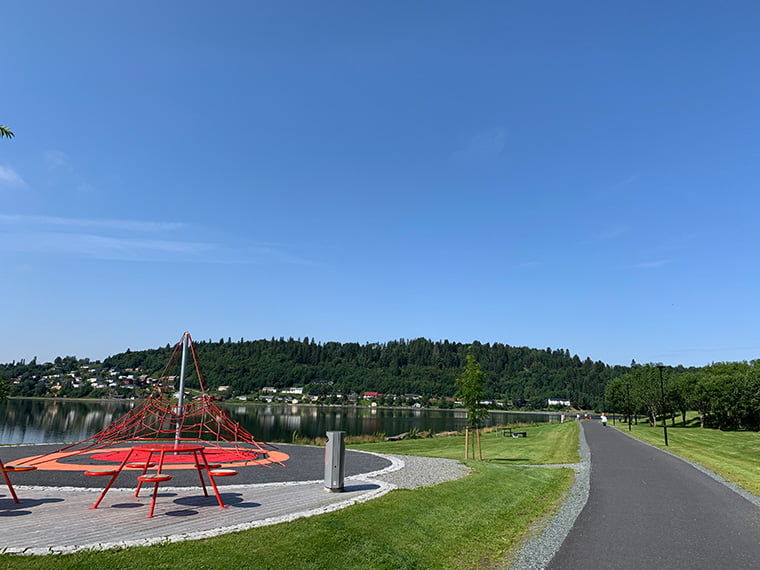 I visited on a random Tuesday and there were plenty of families about, along with a few visitors staying at the smart-looking waterfront campsite.

The path in the photo above runs from the western end of the town centre. It passes the sports complex that includes the football ground home to local team Levanger FK. It also runs past the campsite, and keeps going along the waterfront down to the new shopping centre. Seats, play areas and the odd sculpture are placed along the way.

I took a stroll along the path from the central area to the relatively new Magneten shopping centre. This was a much larger mall than I had expected, and is obviously somewhere that people from the surrounding region use as their main shopping destination. 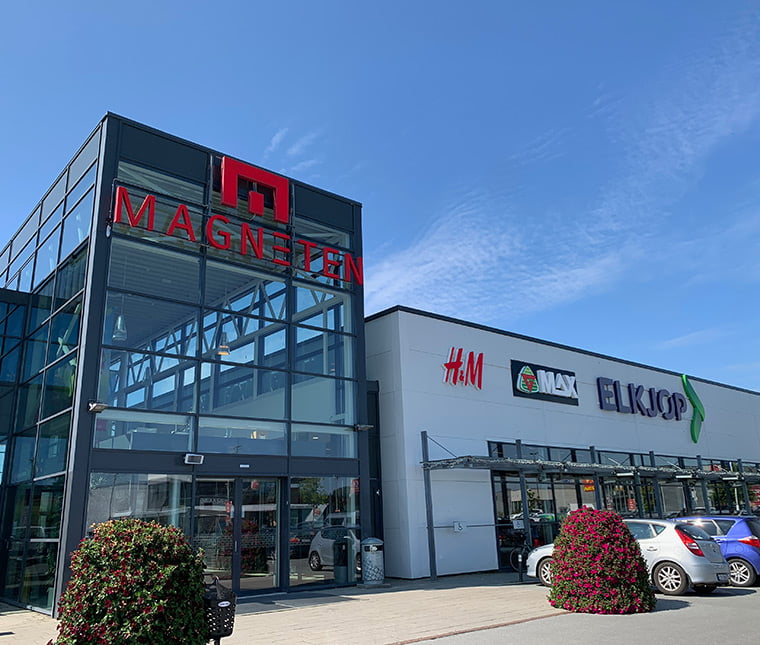 There were several supermarkets, a large sports store and several other outlets in addition to the mall itself. The mall contained the usual high street stores and restaurants and once again, free public bathrooms!

A couple of the cafes/restaurants opened out on the back of the centre by the water, which connected the mall to the path and to the city centre.

By the way, don't miss out on the city centre either if you're in town for shopping. There's a few interesting independent stores amid the usual names.

Things to do in Levanger

Other than walking along the waterfront, there are a few attractions of note.

The small photo museum is free to enter. I visited while the new Renbjørsommet exhibition was in process of being setup. From this autumn, the exhibition will profile the chemist Harald Renbjør, a pioneer in colour photography. There was a temporary exhibition about a red cross photographer, and some interesting camera equipment on display.

The white, stone Levanger Church is a landmark at the very centre of the town. Built in 1902, the church is still in use today and seats about 550 people. Unfortunately during my visit the church was covered in scaffolding, so I didn't get the opportunity for any good photos.

Out of town, the old stone church at Alfshaug is hundreds of years old. There's also a burial site next to it, but you'll need a car to get out there.

If I'd been staying longer than a few hours, I would have taken the public ferry over to Ytterøy island. Ytterøy is known in Norway for its chicken, but it's better known locally as an idyllic spot for holidays or lazy weekends. It's also been known to leave Norwegians rolling on the floor with helpless laughter when foreigners try to pronounce it. 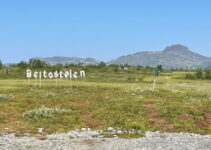 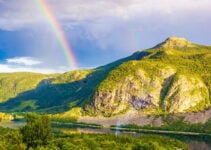 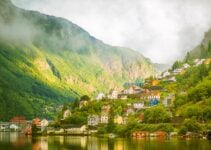