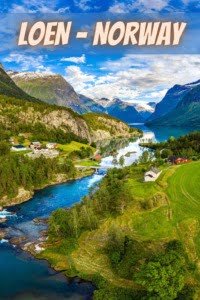 See these spectacular photos from Loen to see why it's one of Norway's most popular tourist spots.

Norway is not exactly short of spectacular scenery, with dramatic mountains, stunning fjords and thousands of miles of picturesque coastline. But some places are simply a cut above. One of them is Lodalen, including the village of Loen and the lake Lovatnet. It's not hard to see why.

Old wooden farmhouses, calm waters and majestic mountains combine perfectly and led Norwegian media to dub the area Norway's ‘Instagram village'. What better way to explain why than by flicking through our photo album…

But just before we start with the eye candy, let's put Loen on a map. Find the Nordfjord, then head east.

Loen is a village in Stryn municipality, now part of Vestland county following the regional reorganisation of Norway in 2020. The village is located at the easternmost end of the Nordfjord, about 6km from Olden and 11km from Stryn, the municipal centre.

Photos of Loen and its surroundings

Queen Sonja is a fan of the area and was invited in 2017 to open the new skylift. More on that later! Her first trip to the area was to Oldeskaret in 1979.

“This is one of the most magnificent parts of our country, with such unique nature and tremendous variation,” said the Queen.

One reason for the area's popularity is its multi-purpose nature. As you can see from the photos, it's ideal for relaxation. But the water and steep mountains mean there's plenty of outdoor activities for those who want a more active vacation.

Perhaps the best-known of these opportunities is the via ferrata (a protected climbing route using a steel cable) to the top of Mount Hoven. Experienced hikers can rent equipment to go it alone, but most people will need to join a guided tour.

But if heights aren't your thing, no problem! Various places including campsites rent out bicycles, kayaks and even rowing boats if you want to try your hand at trout fishing.

Meltwater from the Ramnefjell glacier, an arm of the mighty Jostedal glacier, feeds the lake. The waterfall Ramnefjellsfossen is one of the world's tallest.

For an even more relaxing stay, consider a trip on the canal boat MS Kjenndal. In a typical summer, the boat carries up to 100 passengers across the lake on Fridays and Sundays.

Opened in 2017, the Loen Skylift is one of the newest attractions in the Fjord Norway region.

The cable car climbs more than a kilometre up to the top of Mount Hoven, where passengers are rewarded with spectacular views of the Nordfjord.

The ride itself is notable for its steepness. At one point reaching a gradient of 60°, it's the steepest such transport in the world.

“I think this will be very important for the ability to enjoy the mountains in the area, as well as for the entire region, for Western Norway and for Norway as a whole. It is fantastic that they have realised this dream, this vision of building a skylift so that a wider number of people can share in the experience that many of us have been so privileged to have,” said the Queen of Norway at the opening ceremony.

The Queen also unveiled this five-metre-high horseshoe sculpture to commemorate the tale and the skylift. Why a horseshoe?

Well, an old Norwegian folk tale claims that Mount Hoven is named after the Norse God Odin's horse Sleipner. On a mountain ride, Sleipner is said to have struck his hoof leaving the powerful scar on the mountainside that is clearly visible today.

At the time of writing, a return trip on the skylift costs NOK 540 in the summer season and NOK 440 during the rest of the year. It's pricey, but you'll remember the views for a lifetime.

The risk of landslides

There is a worrying risk of landslides in the area, especially into the lake.

Landslides from the mountain Ramnefjellet caused two major tsunamis in 1905 and 1936, and the chances are high of a repeat incident.

Of course, monitoring and prediction systems are much more sophisticated these days, but the area remains at risk. More than 10,000 Norwegians live in such high-risk areas across the country.

A recent report from the Sunnfjord Geo Centre quantified the risk and recommended against future development in many parts of the Lodalen valley. Local authorities must now decide how to plan for future tourism with limited possibilities for expanding the local infrastructure.