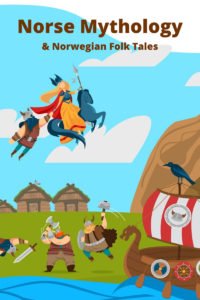 A country's mythology and folklore provides a window into its culture, society and history. That's especially true in Norway, which has a rich Norse mythology along with plenty of folk tales. Let's dive in!

Most people have at least a superficial knowledge of Norse mythology, even if only knowing the names of Thor, Odin and Loki! But Norwegian mythology and folklore is about far more than the Norse Gods.

There's many rural tales of trolls and their antics. And of course, appearances of the aurora borealis conjured up tales for hundreds of years before science provided an explanation.

However, let's start with the big one! Before the Vikings converted to Christianity, there was a vibrant belief system that persists to this day in popular culture.

Today we call that ‘Norse mythology‘, but there was no name for it in the Viking Age. It was simply the set of myths and stories that gave meaning to people's lives.

The stories didn't hide the struggles of everyday life. Unlike some religions of today, the belief system of the Vikings didn't centre around salvation. Rather, it marvelled at the way things were, with a heavy focus on nature.

One of the reasons Norse mythology is such an integral part of modern culture in the English-speaking world could be that little was known about it outside the Nordic region until the 19th century. To us, it's relatively recent!

Much of what we know about the stories comes not from the time of the Vikings at all. It's the Icelandic historian Snorri Sturluson who wrote down many of the stories in the decades around the year 1200. Previously, the stories were passed down orally. The most famous of Sturluson's sagas is Eddas and the Heimskringla.

Many of the Norse stories involve one or more creatures. The world of fantasy literature is packed with mythical creatures including elves, dwarfs and giants. What many don’t realise is that most of these creatures are heavily influenced by Norse mythology.

Some of the best known include Odin's ravens, Huginn and Muninn. Odin used them to keep an eye on his people and gain wisdom. Some consider the ravens as a metaphor for Odin casting out his thoughts. He was known to fear that one day they might not return.

My personal favourite? The kraken! The giant squid-like creature is said to measure more than a mile long. Lying in wait in the deep waters, the Kraken rises up only when disturbed by boats. Sailors often headed straight for it, believing it to be land. Only when they were pulled down to their doom did they realise their mistake.

Visit Norway and it's hard to miss the influence of trolls on the tourist trail. Maybe you've even driven Trollstigen or hiked to the Troll's Tongue. But how much do you know about the mythology behind Norwegian trolls?

The trolls of the mountain/forest are usually seen as large, dumb, brutish creatures. Think of the reputation of a large neanderthal and you're half way there! These creatures are closely connected with nature. As such, they are able to uproot trees to use as clubs, and also control the weather.

Unlike their forest-dwelling siblings, the trolls of the caves live out of sight. Generally, they are depicted as shorter than humans, with stubby arms and legs. They're not generally friendly to humans. Like the other kind of trolls, they also use their connection with nature. However, more often than not it's to deceive humans.

The Asbjørnsen and Moe collection

Norske folkeeventyr is a collection of Norwegian folk tales and legends collected by by Peter Christen Asbjørnsen and Jørgen Moe. First published in 1841, all the tales from the book were released in English as Popular Tales from the Norse in 1859. The book has since been translated many times and is also available in English as Norwegian Folk Tales.

There are 60 tales in the original collection. That's far too many to list here, of course! Instead, let's take a look at a couple in detail.

Gudbrand on the Hillside

One of the best known is Gudbrand i Lia. Known in English as Gudbrand on the Hillside, the tale has been adapted many times, including by Hans Christian Andersen no less!

The tale is about Gudbrand and his wife, who try to sell one of their cows. He trades it for a horse, which he then trades for a pig, then a goat, then a sheep. This goes on until he ends up with a rooster, but realising he is starving, trades it for food. Left with nothing, he tells the tale to his neighbour, and places a bet that his wife will be fine with the situation because they get on so well.

Gudbrand explains the situation to his wife, who sees the positive side in all his decisions. Gudbrand wins the bet. In Hans Christian Andersen's version, known as What the old man does is always right , the story is very similar. However, he ends the story with a bag of rotten apples instead of nothing, and his neighbour is replaced by two travelling Englishmen.

Known in Norwegian as De tolv villender, the Twelve Wild Ducks tells the story of a Queen with twelve sons, but no daughters. She gave birth to a daughter after a troll hag told her that she would have a daughter, but that she would give up her sons upon baptism of the girl. The sons turned to wild ducks and flew away.

The girl became sad as everyone else had brothers and sisters, so her mother told her of her missing brothers. She set out to find them. After three years, she did just that. However, the oldest brother saw her as the cause of their problems. The younger brother defended her. Eventually they decided she could stay but set her to work making clothes. Meanwhile, her brothers flew off as wild ducks every day but always returned as men.

One day, a King round her and brought her to his castle to marry her and start a family. The King's stepmother objected and stole their babies, pinning the blame on the girl and eventually persuading the King to kill her. His stepmother said the girl should be torn apart by twelve horses for her crimes. The King eventually discovered the truth, and gave that punishment to his stepmother.

The Boy Who Had an Eating Match with a Troll

Another popular tale tells the story of Askeladden. He was the youngest son of a farmer in heavy debt. His two older sons went into the forest looking for wood to repay debts. But they were scared away by the trolls and returned with nothing. Askeladden then tried his luck, taking along a piece of cheese in case he got hungry.

Askeladden encountered the angry troll and used the cheese to pretend he was clutching a rock. Squeezing it until whey came out, Askeladden was able to fool the troll into thinking he had superior strength. The troll offered to help the boy cut wood, after which he invited the boy for a meal.

As the troll tended the fire, he asked Askeladden to fetch water in two large buckets. The boy realised he couldn't carry them so fobbed off the troll claiming they were too small. He said instead that he would bring the whole spring.

The troll instead chose to get the water while the boy tended the fire. Once the porridge was ready, they ate and ate. The boy placed his knapsack under his shirt and slashed a hole in it. While the troll thought he was eating a lot, the boy was actually filling the knapsack and letting it leak out.

One the troll was full, the boy suggested that the troll cut a hole in his stomach, like they boy appeared to have done. That way he could eat as much as he wanted! The troll (they are stupid, remember) did so and died. Askeladden returned to the farm with the troll's silver and gold so the farmer could pay off his debts.

Immerse yourself in Norwegian folklore at Eventyrskogen, Norway's fairytale forest. Located at Årdal in Ryfylke near Stavanger, the forest bills itself as “an adventure for the senses.”

The Bønardalen valley walk lies just 1.2 km from the residential area of Dalane. Here you can follow a one-hour walk through the forest with creative installations of trolls and other creatures to keep you company. It's especially suitable for children.

One TripAdvisor review reads: “This place is fantastic, for children especially. There are trolls and googly eyes everywhere, and tons of references to Norwegian tales. The hike is a beautiful one, and the creativity shown on the sides of the trail is pretty incredible; I'm glad none of it has been stolen or vandalized, or ruined by the rain. This is a great, decorative place to go running, and an even greater place to take your kids on a walk.”

The northern lights in Norwegian mythology

There are more myths and legends surrounding the aurora borealis than the number of times I've seen them! Some of the stories still persist today in the culture of the Sami people of northern Scandinavia.

If you've ever seen the northern lights, it's not hard to understand why. Before we understood the science, these lights must have seemed almost like magic. The way these ribbons of light seem to dance through the sky certainly suggests something far from natural pulling the strings.

In a previous interview, a northern lights chaser from Tromsø explained some of the superstitions. She explained that because Sami people work outside, they look up at the sky far more often than most:

“Their superstitions vary across the communities, but overall it is about having a big respect for the northern lights, almost to the point where they're fearful of them. Many sami people used to think you shouldn't make the aurora angry because they would come and harm you. For instance, they never looked directly at them. Since they believe in nature-related gods, spirit of the water, sea and mountains, it was a powerful phenomenon.”

But the association of the northern lights with paranormal goings-on stretches back, way back. One legend in Norse mythology suggests that the lights were the reflections from the shields of the Valkyries – the female figures that were said to decide who made it to Valhalla.

According to the Aurora Zone, “dying in battle seemed to occupy Norse mythology quite a bit and the Aurora was also believed to be ‘Bifrost Bridge', a glowing and pulsating arch which led those fallen in battle to the warriors final resting place in Valhalla.”

What's your favourite piece of Norwegian mythology or folklore?