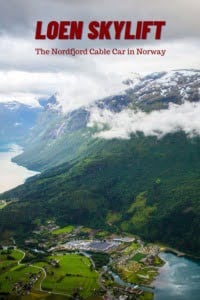 Since 2017, the Loen Skylift cable car has given thousands of people a whole new perspective on Norway's Nordfjord. There's just one problem.

This summer we took a trip around Norway and called by Olden and Loen for the first time. One of the things I had hoped to do was ride the Loen Skylift, a cable car providing spectacular views of the inner Nordfjord.

Even with relatively few international tourists, I had expected a busy time. But no! We were straight on to the cable car, and had the same experience on the way back down.

It was a thoroughly enjoyable experience–but there was just one problem. It's an extremely expensive trip. A roundtrip ticket costs NOK 540. At the time of writing, that's about USD $61. Ouch! Is it worth it? Read on and judge for yourself.

A highlight of the Nordfjord region

The cable car or aerial tramway is based in the village of Loen in Stryn municipality. It whisks visitors to the top of Mount Hoven, at a height of 1,011 metres or 3,317 feet.

The view is simply spectacular. You can see for miles down the Nordfjord, get a birds-eye view on villages of Loen and Olden, and even glimpse the outermost edges of Norway's epic Jostedalsbreen glacier.

The ride is also an attraction in itself. With a gradient of up to 60°, it is one of the steepest such transportation systems in the world. It travels at a maximum speed of 7 metres per second, or 23 feet per second.

Watch: A ride on the Loen Skylift

First things first, if you prefer to watch rather than read, I have an option for you. Here's a video I made of our trip on the cable car earlier this summer. You can watch it below or over on our YouTube channel.

I hope you enjoyed the video! Read on for more about our trip and plenty more photos.

Where is the Loen Skylift?

The Skylift is located just a few hundred metres from Loen village along route 60 in the direction of Stryn. It’s at the easternmost end of the Nordfjord on the edge of Jostedalsbreen National Park.

If you’re staying in Loen, I recommend walking especially if you’re staying at the Alexandra or Hotel Loenfjord. It takes just ten minutes and saves hunting for a parking spot.

It also builds anticipation for the ride. As you get closer to the foot of Mount Hoven, you’ll make out the cable car station at the summit.

The lower station is on two levels with a gift shop and ticket office on the lower section by the waterfront. Pictured below is the actual station. If you have a ticket, you can enter here.

We ordered tickets in advance via the website, so were able to walk straight up to the barriers and scan the barcode to gain entry. There was no ticket queue anyway, but at busy times I expect this would be a timesaver.

The actual ride up in the cable car is over in a flash. It takes just five minutes. The views are best from the front, but you'll get a good view from most spots inside the carriage.

Even if you don't get the best view, don't worry. The very best vistas are just a few steps away at the top of the mountain!

On top of Mount Hoven

The top station leads passengers into a visitor centre containing a restaurant, cafe and shop. We headed straight for the viewing platform. Despite the strong winds, we stayed on the platform for many minutes taking it all in.

From the platform, we saw several hikers wandering off in different directions, which led to us wanting to explore a little further. I'm glad we did, as we found a few curious things behind the visitor centre. First of all, a giant horsehoe!

The Queen unveiled this five-metre-high horseshoe sculpture when the cable car opened in 2017. To understand the story behind it, we must look at Norwegian mythology.

An old folk tale claims that Mount Hoven is named after the Norse God Odin's horse Sleipner. On a mountain ride, Sleipner is said to have struck his hoof leaving the powerful scar on the mountainside that is clearly visible today.

Next to the horseshoe, there's a transparent panel detailing the various peaks you can see together with their altitude. It certainly helps to put the surroundings into perspective.

At the time of writing, a return ticket costs NOK 540. Winter tickets valid from mid-October to the end of April are NOK 450. Whether it's worth the cost is entirely up to you.

Opening hours vary throughout the year. Typically the facility opens at 10am but its closing time varies a lot. Check the website for the latest information.

It's possible to buy snacks from the small shop/cafe in the visitor centre. But if you want a table in the restaurant, you should book in advance and be sure to arrive in good time.