Skip to content
Home » Living in Norway » Norway Rat: An Adaptable Rodent Found All Over The World 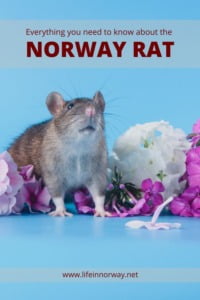 The Norway rat is known throughout the world. Let's look at the story of the rodent, and especially the origins of its name.

Rattus norvegicus is known by many names such as the brown rat, common rat, sewer rat, Hanover rat, Norwegian rat, city rat, water rat and wharf rat. But it's most commonly known as the Norway rat.

Wild Norway rats are considered pests. They live in many parts of the world, often in close proximity to humans. The rodents are known for invading and damaging property, attacking supplies of food and of course, spreading disease.

Is the Norway rat from Norway?

Given the name, this answer may surprise you. No, the Norway rat did not originate in Norway. Most researchers and historians believe the rodent originated in Asia.

So, that leads to an obvious follow-on question: how did the Norway rat get its name? The answer is fairly simple. The rats arrived in England on ships from Norway in the 18th century, so the English named them “Norway rats” and the name stuck.

However, the species had arrived in Europe from Asia via Russia hundreds of years before that. Remains of the species have been discovered at archaeological sites as far back as the 14th century.

If you've seen a rodent recently and wondering what species it is, this may help. Norway rats have mostly bristly brown fur, with some black hairs. They are lighter on the underside.

Read more: Viking Cats: The Preferred Pets of the Northmen

Expect a typical Norway rat to be between 7 and 9 inches long, with small eyes and ears. Their tails are shorter than the length of their head and body coupled together.

Life of the Norway rat

Norway rats are incredibly adaptable creatures. They live in almost all of our planet's land environments with the exception of deserts, tundra and polar ice. Their physical resilience and omnivorous diet help them adapt.

Despite this adaptability, Norway rats have poor vision and are colourblind. Their other senses compensate for this, however. The rodents are also adept runners, climbers, jumpers and swimmers.

Outside of built-up areas, the rodents prefer to live in fields, farmlands and other structures. The soil near riverbanks are common homes, as are piles of garbage and wood and areas close to railway embankments.

When food sources become scarce in the autumn, Norway rats are much more likely to enter homes.

Food is the reason that Norway rats often lives in close proximity to humans, especially in densely-populated cities. Because they often inhabit sewer systems and invade and feast on garbage, the rodents are often seen as dirty animals.

But the reality is that Norway rats constantly groom themselves. They are actually very clean animals. However, they are carriers of numerous diseases that can be a danger to humans.

Health risks of the Norway rat

The Norway rat can pose a serious threat to human health because of the various pathogens and parasites it can carry.

Rat bites can transmit bacterial infections to humans, but that's not the only way. Contact with the rat's urine can also spread infection, as can fleas that move from rats to humans.

How do I get rid of Norway rats?

If you are trying to eliminate the risk of disease and damage from brown rats, you're not alone. Humans have strived to do this for centuries, leading to the development of a thriving pest control industry.

Norway rats reproduce quickly and produce up to six litters a year. This means taking proactive measures is important to prevent an infestation from getting out of hand.

Older toxic compounds are not common anymore. Rats quickly develop an aversion to substances that have caused illness, and in any case the substances can pose a risk to other animals and humans.

The best advice if you're suffering from an infestation of Norway rats? Call a qualified professional in your area.

Domestication of the laboratory rat

Descended from wild Rattus norvegicus, the laboratory rat was the first mammal domesticated for research purposes.

It is now widely used in fields including neuroscience, physiology and toxicology. They account for almost 15% of all research animals in Europe, second only to mice. Such is their association with research, the phrase “lab rat” is commonplace in other contexts.

The lab rat thrives in captivity. Its domestication has produced many different types of rat that are used for a range of purposes such as behavioural studies and medical trials.

Scientists began to note differences between the ‘original' wild Norway rats and their lab counterparts in the early 20th century. This advanced domestication suggests that studies of wild rats could benefit the wider research community if they were to be resumed.

1 thought on “Norway Rat: An Adaptable Rodent Found All Over The World”