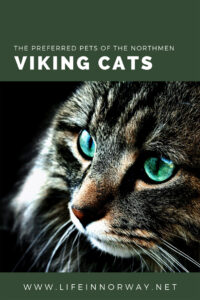 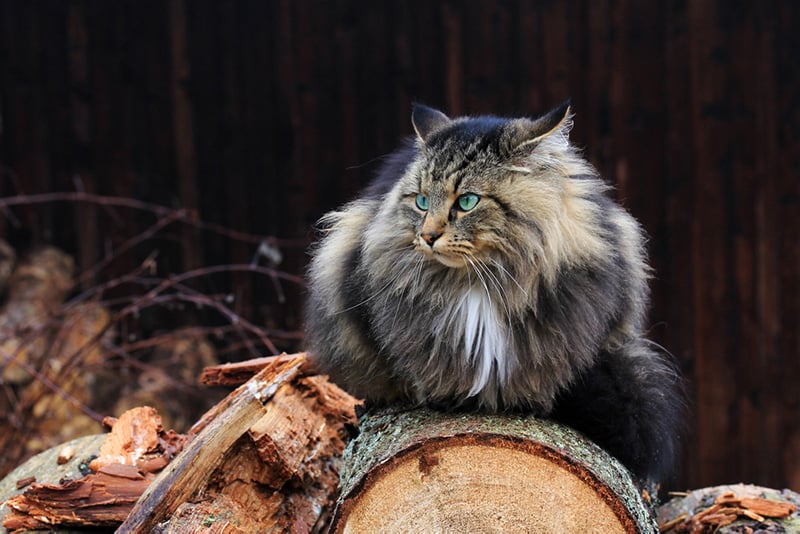 Formidable warriors, fiercely protecting their territory and exploring widely to conquer new lands. No, we’re not talking about Vikings this time. Well we are, but a specific subset…Viking cats!

To put another nail in the coffin of the story about how Vikings are ruthless barbarians, never ceasing in their slaughtering and pillaging, we now know they kept pet cats.

So, what do we know about the Norsefolk’s fondness for furry felines? Let’s take a look.

We’ll start at the beginning by looking into the mythology. There are a number of tales of cats mentioned in Scandinavian folklore. The Norse god Freya (Freyja) drove a chariot pulled by two cats.

These are referred to in the Prose Edda as ‘gib-cats’ and are depicted as grey or blue in colour. The cats were a gift from Thor, and she used them to travel to the funeral of Baldur, her estranged son.

The cat was Freya’s sacred animal and she would reportedly bless those who were kind to them. Often if a wedding coincided with fine weather, the bride was said to have ‘fed the cat well’.

There’s also the Scandinavian folk tale of a cat that helps a poor man. First the cat wins a castle of silver and gold by tricking a troll – keeping it talking until sunrise when it turned to stone. Then, the cat asks the poor man to cut off its head.

Reluctantly, after much persuasion, he does so at which point the cat is transformed into a princess who had been turned into a cat by the troll. The two then marry and live happily ever after in the castle.

Elsewhere, the ferocious wolf Fenrir is restrained by a chain called Gleipnir, made from six magical ingredients including ‘the sound of a cat walking’. 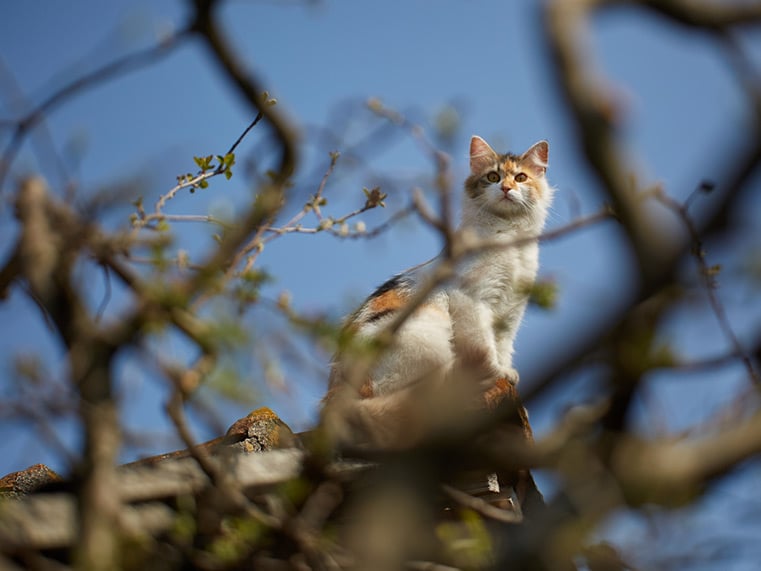 And finally, once of the Frost Giants tricked Thor into trying to lift up a huge cat. When Thor could only lift one paw, the cat was revealed to be the Jormungandr – the mighty serpent that encircles Midgard.

Historians are still trying to piece together exactly how cats came to conquer the globe from their early beginnings in the Middle East. So much is known about the domestication of dogs and how they came to spread throughout the world but so little is known about cats.

One thing we do know is that it’s likely that the Vikings played a part in spreading our fluffy feline companions around the globe. A major study that concluded in 2016 was presented at the 7th International Symposium on Biomolecular Archaeology in Oxford, UK, by Eva-Maria Geigl, a researcher from the Institut Jacques Monod in Paris.

The study analysed the remains of over 200 cats from 30 different archaeological sites throughout Africa and Eurasia. These range from the Mesolithic period, when humans were still hunter-gatherers, through the earliest days of human settlement and agriculture, right the way up to the 18th century.

All modern domesticated cats belong to the species Felis catus. These in turn are descended from a single subspecies, the Near Eastern wildcat, Felis sylvestris lybica. This small, tawny-coloured member of the wildcat family still stalks the desert areas of the Middle East today.

Wildcats are very different from the cats we keep as pets. They’re solitary, ill-tempered and pretty reclusive. But in genetic terms, they’re actually not all that different. So, how did these fierce but shy hunters become the beloved fluffballs that we know today? 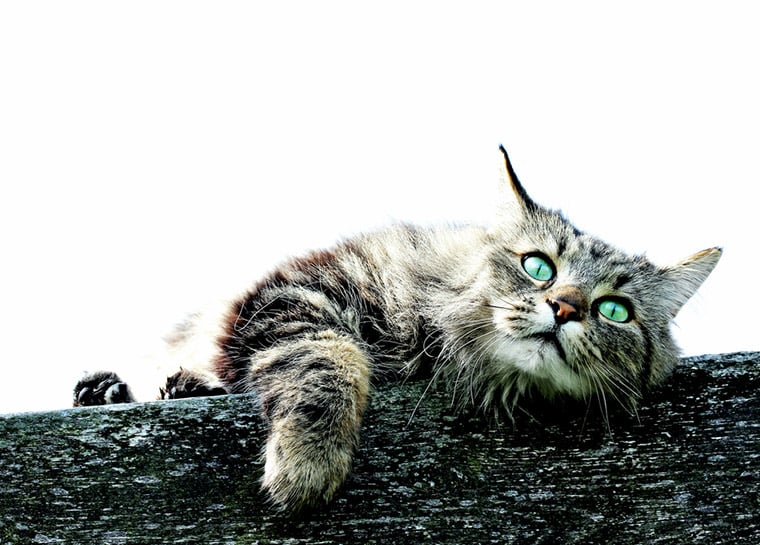 The prevailing theory is that humans didn’t actually domesticate cats, at least initially, like they did with dogs. Rather, cats domesticated themselves. We didn’t grab them and put them in cages and breed them until they behaved. Instead, we developed a mutually beneficial relationship.

As early humans spread across the globe and started planting crops, these crops would attract vermin such as mice and rats. These vermin then attracted cats, protecting precious crops from being eaten.

Effectively, cats have the dual benefits of being both cute and useful – a winning combination for humans to take notice. In turn, humans created or attracted more than enough food to keep the cats around.

So, we have cats and humans chilling out together in the Fertile Crescent of the Near and Middle East. How did they make their way all the way up to Scandinavia? Cats like to explore but they have a pretty limited range! This is where that major study really comes into its own.

The DNA evidence points to two separate migrations happening from the East. The first migration from the Middle East occurred around 8,000 years ago and reached a fair way into Europe and across into Africa. We know the Ancient Egyptians loved and revered cats and we see a lot of feline iconography in Egyptian mythology.

The second migration started from Egypt, aided greatly by this new-fangled technology called boats. This started around 1,700 B.C.E. but really accelerated in the 5th to the 13th centuries. This is the migration that gave the Vikings their cats.

We don’t know exactly when cats reached Scandinavia. There’s a small amount of evidence that they were in the area during the iron age, around 200 B.C.E. It’s not really until the Viking Age began that the evidence becomes much stronger.

Unlike the areas of the Middle East, where cats came to humans via the farming communities, in Scandinavia they first started appearing in urban settlements. This suggests that the cats were either brought by visitors from overseas or brought back by Vikings returning from their travels.

Remains found in a Viking trading port on the Baltic Sea in Northern Germany suggest that, by the middle ages, cats were providing their valuable rodent-control services on-board Viking ships.

From the urban areas, the cats then spread to the rural communities where they could also find plenty of ways to be useful to the Norse people.

The dark side of keeping pet cats

Being a good hunter is one way to be useful to humans. Unfortunately for cats, being fluffy gives another use. One thing we know about the Vikings is that they loved fur. When you live in the far North, fur is vitally important to keep warm.

Vikings traded pelts of a wide range of animals, especially seals, with the people living further South. Even in countries with high temperatures, soft, natural fur was a prized possession.

It’s possible that the Vikings simply waited until the cats reached the end of their useful life and then, after a nice humane ending, skinned them to use or sell their fur. Evidence, however, suggests that Vikings also farmed cats for their fur.

The Viking fortress at Nonnebakken, in Odense, is well known from Norse mythology. In the area, the remains of 68 cats were found in a well. Analysis shows that these cats definitely didn’t die of natural causes. Most had their necks broken and there were cut marks on some of the bones, consistent with skinning for fur.

So, we know that the Vikings had cats in their towns, in their rural areas and most importantly on their ships. This makes a lot of sense because, much more than on land, it’s important when you’re sailing to keep your food supplies intact.

The natural relationship between humans and cats was still very much an arrangement of mutual benefit. Cats could get food more easily by killing rats and mice. 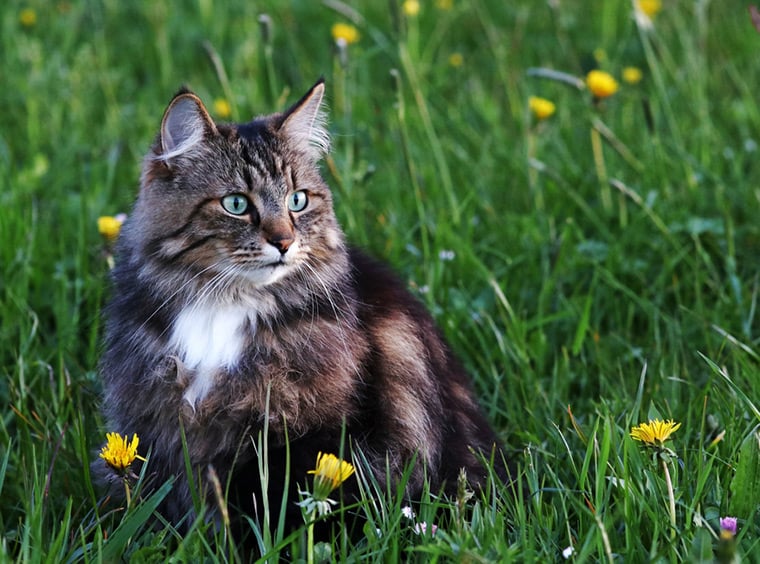 Their energy requirements aren’t all that great, so they don’t put a burden on the tribe even when there’s not many rodents around. By sailing with cats, the Vikings could be sure that their food supply would remain intact and unsullied by disease-bearing vermin.

The main evidence we have for cats sailing with Vikings comes from Greenland and Canada. Cat remains in Greenland show that they would have been with the Vikings right from the start of their settlement there. Meanwhile, domestic cats in North America seem to date to around that time too. Maybe Leif Erikson was the one to introduce Felis catus to North America.

Nowadays, cats are second only to dogs as the most popular pet in the United States. And because cat owners tend to have more cats than dog owners have dogs, there are actually more domestic cats than dogs in the country!

One of the more surprising findings about cats, from a different study at the University of Copenhagen, is that they’ve grown in size since humans first encountered them. While we have the ‘big cats’, the majority of wildcats are pretty tiny and the Near Eastern wildcat that they descended from is one of these tiny species.

From sifting through dozens of bags of archaeological remains, from sites all across Denmark, researcher Julie Bitz-Thorsen found that modern domestic cats in Denmark are on average 16% larger than their Viking-era counterparts.

It’s possible that this is unique to Denmark – maybe Danish cats are especially large! But findings in other areas suggest that this happened all over.

This is the exact opposite of what scientists expected as, in all other cases, domestication has made animals smaller. While we have some pretty big dogs, such as our favourite the Norwegian Elkhound, the average dog is around 25% smaller than its wild cousins, the grey wolves.

There may be a few different reasons for this. Cats were pretty small to begin with, so there was no reason to bring down their size to make them more manageable. Also, as cats domesticated themselves, humans weren’t too involved in how the evolution happened.

Instead, it’s likely that the contact with humans allowed cats to grow larger by making food much less scarce and removing the need to spend a lot of energy on hunting.

As I mentioned earlier, cats kinda domesticated themselves. The genetic differences between domestic cats and wildcats are very small. It wasn’t until the Viking Age that we have actual evidence of humans directly and deliberately influencing cat development.

The main culprit is the tabby gene. Aside from the obvious exceptions, most wildcats have a subtle striped pattern, allowing them to blend in with their surroundings. Desert cats tend more towards lighter, sandy colours and forest cats tend towards darker colours.

The non-uniform colouring of the tabby cat, including dots, white patches, swirls and flecks, is likely a result of human action. The gene has existed in cats dating back to the early days of the Ottoman Empire, but it didn’t start to be expressed until the Middle Ages.

We don’t know, of course, why this happened. Whether it was human selection to make them look cuter, or to make the fur look nicer, or simply that different genes came to be expressed more because the cats were able to avoid predators.

But we do know that the final domestication of cats, started in the days when Vikings were roaming the Earth. Nowadays, the modern descendent of those Viking cats is the adorable Norwegian Forest Cat.

Did you enjoy this post? If so, why not share it on Pinterest so other cat-lovers can enjoy it too? Just hit the social sharing button for the perfect pin. 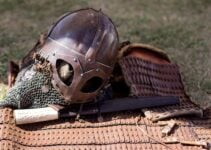 7 thoughts on “Viking Cats: The Preferred Pets of the Northmen”