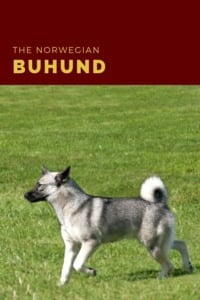 Meet the Norwegian Buhund: the fluffy bundle of joy and energy that makes a great pet in Norway and beyond.

If you have ever read any of our previous dog articles, then you probably know by now how much Norwegians love their pooches. One popular breed of dog in Norway is the beautiful Norwegian Buhund.

The Buhund has a distinctive look, is playful and likes to be at the centre of the action. It is also a breed with an interesting history.

So without further ado, let’s take a closer look at this fluffy canine.

Origin and name of the Buhund

The name “Buhund” comes from the Norwegian word “bu” which translates as “homestead” or “hut” – or similar simple outdoor dwelling – a place where a shepherd lived and tended to his sheep.

The Buhund is part of the spitz type, a category of dog that is known for its pointed ears and snout. The word “Spitz” is of German origin and translates simply as “pointed” in English.

This makes a lot of sense if you consider the many pointed characteristics of the animal. The Buhund is also a breed of dog that is closely related to the Icelandic Sheepdog and the Jämthund.

Like other spitz dogs, the Norwegian Buhund is thought to have originated from colder places such as Siberia and other areas within the Arctic region.

The breed is characterised by a bushy tail that curls up over its back. The Buhund also has a dense coat that must have come in very useful in the cold climate in which it was put to work.

Like all dogs, the Norwegian Sheepdog can grow to various sizes, but as a general rule they are considered a medium-sized dog. Males can typically range from 43 to 45 centimetres (17 to 18 inches) in size while females tend to be somewhat smaller.

Temperament of the Norwegian Buhund

The Norwegian Buhund is definitely not a breed that likes to laze about the house all day. This type of dog has lots of energy and it can take a lot to tire them out.

This makes a lot of sense if you think of their history as a breed, and a time when they herded sheep and other cattle on a daily basis. Long walks are advisably a few times each day; perhaps with a small ball to play chase, which is a perfect way to use up the dog’s energy levels.

The Buhund loves to be around people and children, so the dog thrives in the busyness and whirlwind environment that can be family life.

In its days on the farm, this dog was trained and shaped for its use as a sheep dog. Today, it is still important to give the Buhund some training in its formative years.

Taking time to do this will benefit the dog’s general behaviour and make it a better fit to its new home. Because it’s an intelligent and playful breed, it’s more than happy to be taught new things.

Health of the Buhund

Generally, the Buhund has a good health record, although there are a few issues to look out for with this breed. They can be prone to eye problems such as cataracts, an issue that is usually associated with age, but in the case of the Buhund it can occur much younger.

Another health problem that this breed sometimes suffers from is hip dysplasia. It’s a problem with abnormalities in the skeleton that most commonly affects the movement of the hip joint.

There are mild conditions of the disease, to more severe forms – with the serious forms, the dog may require surgery or some other medical intervention.

It is also possible your Buhund will not show any symptoms of the disease and/or may be totally unaffected by dysplasia.

The Buhund is a pretty easy dog to take care of when it comes to grooming. It has a medium length fur which doesn’t tangle or mat. They blow their coat twice each year, so these are good times to get the brush out.

It is also advisable to give your furry friend a weekly brushing session throughout the year, too, in order to keep the coat in tip top condition.

There isn’t a designated Norwegian Buhund club in Norway, but the Norwegian Kennel Club is always a good source of dog and breed information for owners. It’s the largest organisation for dog owners in Norway with more than 70,000 members.

Their websites are packed full of information about the breed and cover everything from breed health to news on upcoming dog shows.