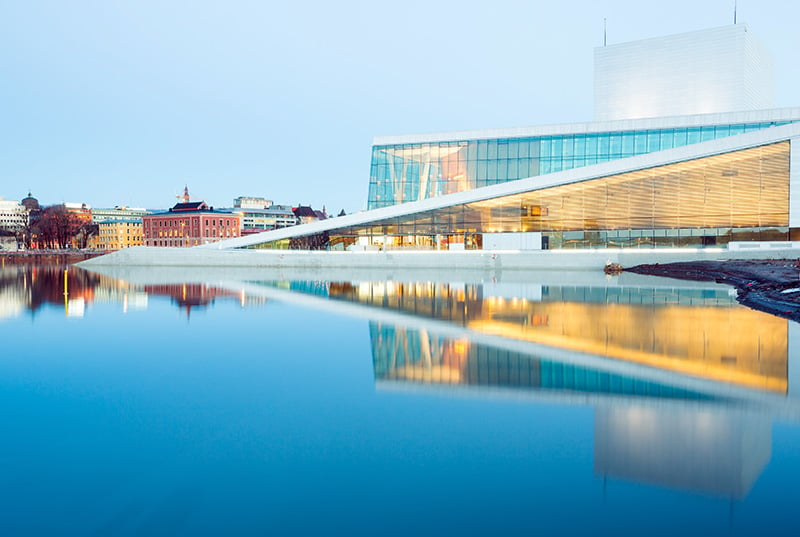 It's barely 10 years old but is already one of Norway's most famous modern buildings. Here's everything you need to know about Oslo Opera House.

To many, Scandinavian design means simplicity, minimalism and functionality. A certain Swedish furniture store being the prime example!

But these days Scandinavian design is about far more than a cheap chest of drawers. The region is starting to make a splash in the world of architecture. Oslo's waterfront Opera House was one of the first buildings in a new wave of Scandinavian architecture.

Whether you want to see one of Oslo's top sights, walk on the roof or attend a performance, here’s everything you need to know about visiting Oslo’s Opera House.

The striking angular design, somewhere between a glacier, ski slope and a ship coming in to dock, connects the city to its people in spectacular fashion. The roof rises out of the water allowing Oslo's residents and visitors the ability to walk all over it. The Italian marble, white granite and glass structure shimmers beautifully in the summer sun, imposing yet inviting.

What's terrific about the opera house is not just the connection between the city, its culture and its people, it's how Snøhetta were able to put the essence of both Oslo and Norway at the very core of its design. That's something missing in a lot of contemporary architecture these days.

It's no wonder the design has won awards. So far it's picked up the 2008 culture award at the World Architecture Festival in Barcelona and the 2009 European Union Prize for Contemporary Architecture (Mies van der Rohe award).

Unlike many modern buildings, the Opera House seems to be almost universally liked. Its design also means it's very people-friendly. Visitors can walk up the sloped roof to the top and enjoy great views over the city.

Free concerts are sometimes held on top of the roof during the summer. These factors have surely helped the building become so loved among Oslo's locals and visitors alike. However, if you're visiting Oslo in the winter months, the roof is roped off for safety reasons.

Wondering why the building sparkles so much? Well, much of the exterior is covered in white granite and a white Italian marble. The stage tower is clad in white aluminium, designed to evoke old weaving patterns.

With such a memorable design and views across the city and the fjord, you might forget there's an opera house underneath you. That would be a shame, because it’s worth taking a look inside too, even if you don’t have a ticket for a performance.

Inside the Opera House

A bit breezy on the roof? Step inside for a break. The vast windows let natural light flood in to the eye-catching interior. You don't need a ticket for a performance to step inside the foyer.

Here you'll find a cafe and a shop that sells classical music, and of course the opportunity to buy tickets for a performance. The last few times I've visited, taking photos inside has been frowned upon. You have been warned! 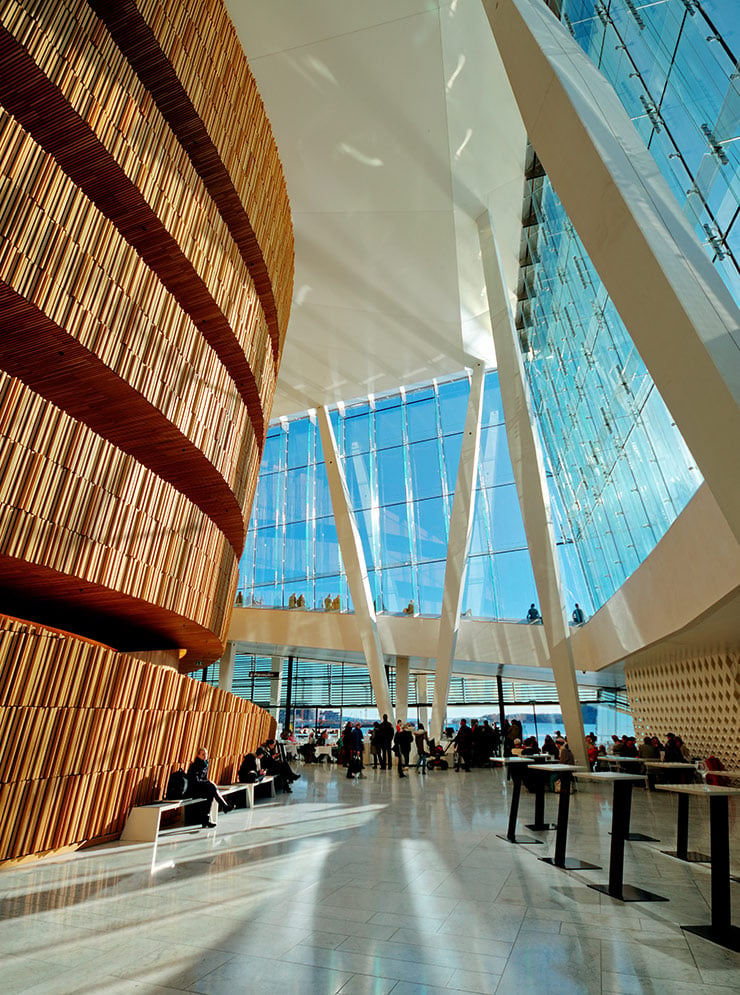 How to get to Oslo Opera House

The Opera House is located on the eastern side of the central city, just a few steps from Oslo Central Station (Oslo S). I you leave the station by the exit at the Airport Express / Thon Hotel Opera side of the station, you just need to walk straight ahead to get there.

If you’re travelling from elsewhere in Oslo, the closest metro stop is Jernbanetorget. Here, you’ll also find many bus and tram routes from all over the city, while the central bus station (for regional buses) is also close by.

If you are attending a performance and want to stay as close as possible to the venue, there are several hotels within a couple minutes’ walk. These include Thon Hotel Opera, Amerikalinjen and the Comfort Hotel Central Station. However, you won’t be too far away wherever you stay in Oslo’s compact central area.

Many people come for the architecture, but of course this building is about much more than that! 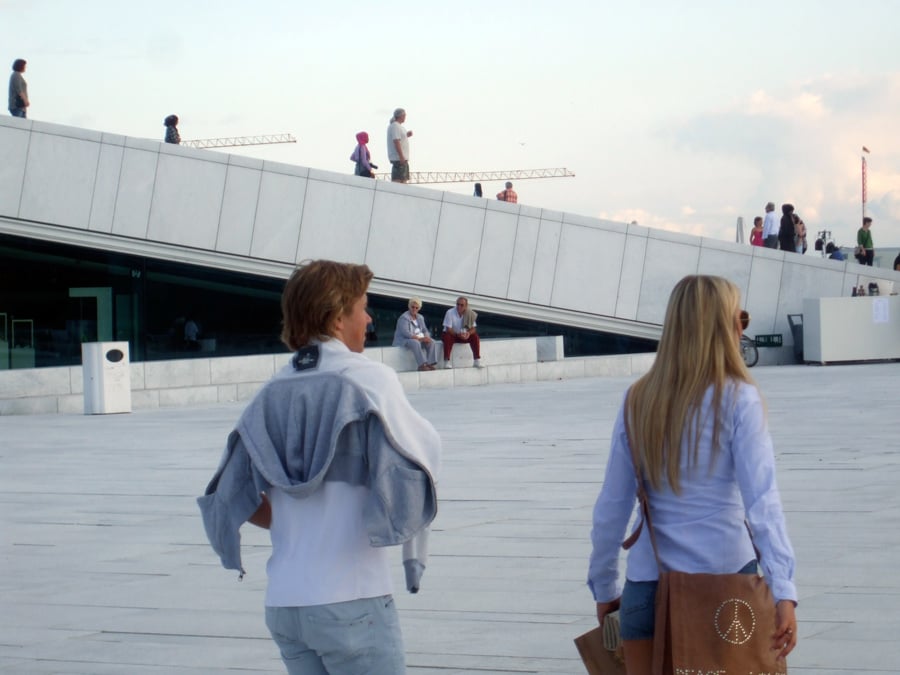 Of course, it's also home to the Norwegian National Opera and Ballet. While the building itself is super famous, the opera hall inside is not as big as you might expect. The main auditorium seats 1,364, while two smaller spaces seat 200 and 400.

This means to attend a live event you’ll need to buy tickets in advance. As for what the experience is like, I’m afraid I am yet to attend a performance so I cannot advise you here!

As for what’s on, how much the tickets are and so on, that’s not something I can cover here as the schedule constantly changes and new announcements are made all the time. Head on over to their website, which has a full English translation, to find the current performance line-up.

The company responsible for the award-winning design was Norway's Snøhetta, who have since gone on to other major projects. The Parliament of Norway awarded Snøhetta the contract to design a new opera house to kick-off the regeneration of the run-down Bjørvika area of the city. It was one of the earliest steps in a complete revitalisation of the Oslo waterfront.

The construction took four years. King Harald, Queen Margrethe II of Denmark and President Tarja Halonen of Finland were among the guests at the gala opening in April 2008. Since its opening, the building has been joined by the towers of Barcode. Soon, the new central library and Munch Museum will be added to the neighbourhood.

Did you enjoy this post? Have you been to the Opera House, or planning to go there? Why not share your experience on Pinterest, with this handy pin: 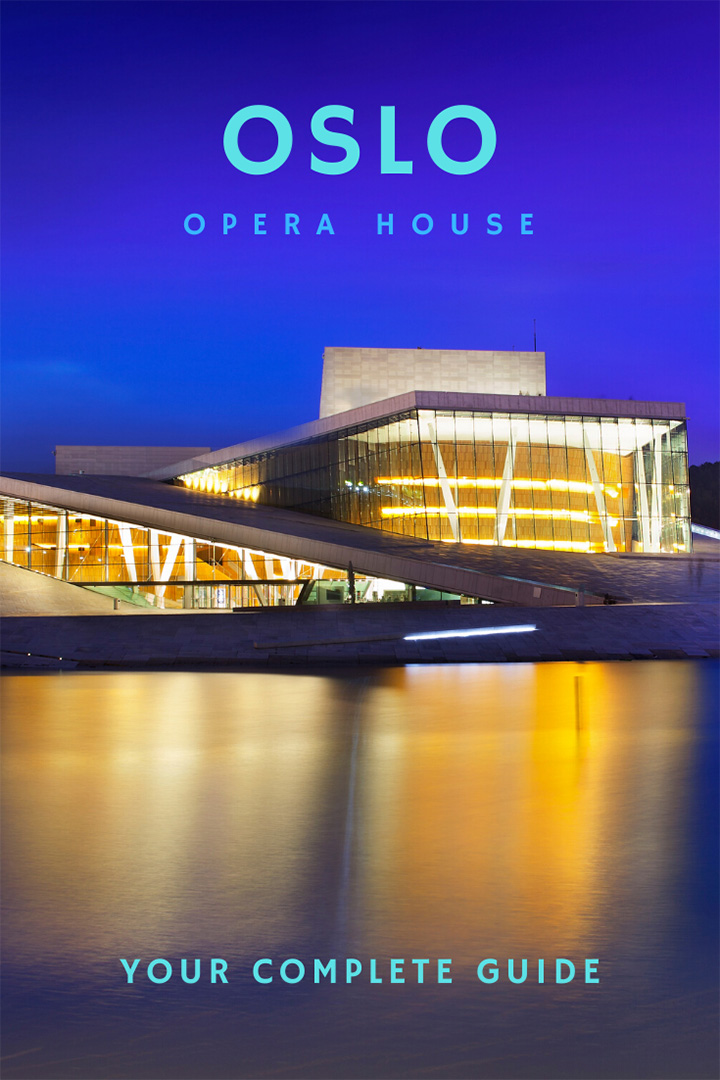