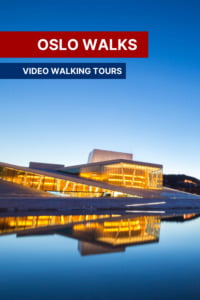 Our new series of free Oslo Walks videos takes you through the streets of the Norwegian capital city.

Thousands of Life in Norway readers have had to cancel plans to visit Norway over the past year. The Life in Norway team was grounded for many months too.

But while some travel restrictions remain in place, domestic travel is up and running. Throughout June and July, we've been travelling around Norway to record walking tour videos.

The videos are deliberately designed to replicate the experience of being there in person. That means no voiceover (aside from a brief intro) and ambient sound wherever possible.

While these won't replace an in-person visit, I hope they play a part in satisfying your Norwegian wanderlust for at least a little while!

We start in the Norwegian capital city, Oslo. All the videos are freely available on YouTube, so be sure to subscribe to the Life in Norway channel to be notified when new ones are published.

A walking tour of the Oslo Opera House exterior and the new Bjørvika neighbourhood in downtown Oslo. I shot this walk on a Saturday afternoon in June 2021:

Oslo's Opera House is one of the country's best-known buildings. The striking angular design connects the city to its people in spectacular fashion. The roof rises out of the water allowing Oslo's residents and visitors the ability to walk all over it.

The Italian marble, white granite and glass structure shimmers beautifully in the summer sun, imposing yet inviting. Opera House bosses don't allow photography inside the building, including the foyer, so this video stays outside!

The walk starts from outside Oslo Central Station and also includes the new Deichman Library.

A walking tour along Karl Johans gate in Oslo. I shot this walk early on a Saturday morning in June 2021.

The main thoroughfare in the Norwegian capital, Karl Johans gate is popular with tourists and locals alike.

Our walk starts from Jernbanetorget public square in front of Oslo Central Station. We then head past the Norwegian Parliament and National Theatre, ending at the Royal Palace.

Continuing on from the above video, we stick around the Royal Palace to explore the fascinating gardens, Slottsparken. I shot this video on a Saturday in early July, 2021:

Many tourists visit Oslo's Royal Palace but not all of them explore the gardens. They've always been one of the prettiest parts of the city but now with the intriguing sculptures it's even more worthy of a visit.

Opened in 2016 and officially known as the Princess Ingrid Alexandra Sculpture Park, the fairytale sculptures were chosen by children, for children.

Speaking of sculptures, we had to pay this place a visit. This video presents a walking tour of Oslo's world-famous Vigeland Sculpture Park. This was actually my first attempt at filming such a video so I hope you'll forgive some of the experimentation during the walk!

The Vigeland sculptures in Frogner Park in the west of Oslo is one of Norway's most popular tourist attractions, open 24/7 all year round. It contains more than 200 sculptures in bronze, granite and cast iron from the mind of Gustav Vigeland, who also designed the park itself.

My walk took place in June following an overnight downpour. Although it was a Saturday, it was very early in the morning which is why there are so few people around.

A walking tour of part of the ever-changing waterfront area of Oslo. I shot this walk on a Saturday afternoon in June 2021:

The walk starts from Rådhusplassen and passes Oslo City Hall, the Nobel Peace Centre, Aker Brygge and ends at Tjuvholmen.

Aker Brygge and Tjuvholmen are former industrial and shipyard areas that have been transformed with residential and commercial development over the past few decades.

I hope you enjoyed the videos! There's more to come, including similar videos shot in different seasons. Vigeland Park has a very different feel to it in the winter, for example!