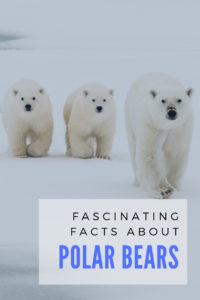 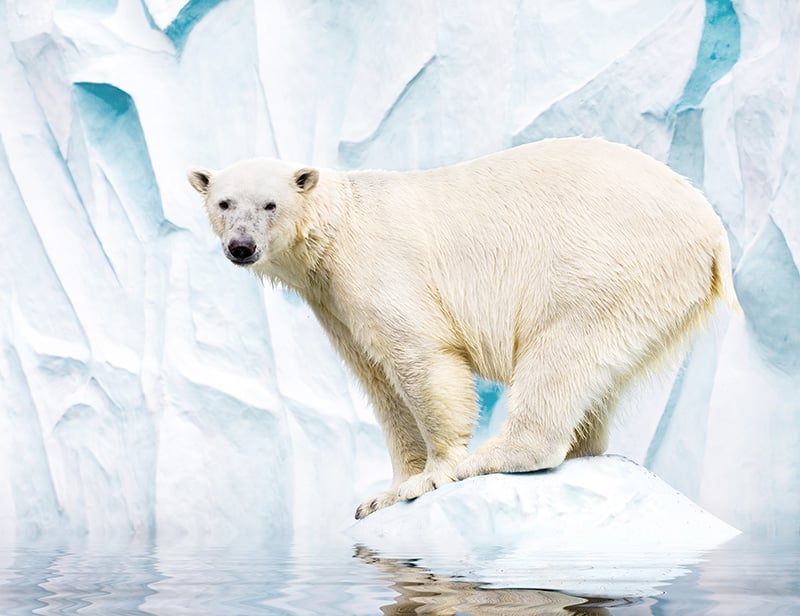 King in the north! Impress your family and friends with these fun facts about polar bears, a threatened species in the world's northern region.

One of the world's most iconic creatures, the awe-inspiring polar bear lives in the planet's Arctic region. But how much do you know about the real King in the north?

Polar bears do have a lot in common with other bears, but there are a lot of distinctive features too. They have a long, narrow head that is small relative to the body and short, strong claws. Here in Norway, polar bears are only found in Svalbard in areas with sea ice. The highest density is found along the east coast and in the northern fjords.

These majestic animals are under serious threat from climate change. To celebrate these beautiful creatures and raise awareness of their plight, here are a bunch of polar bear facts you may or may not know. Enjoy! 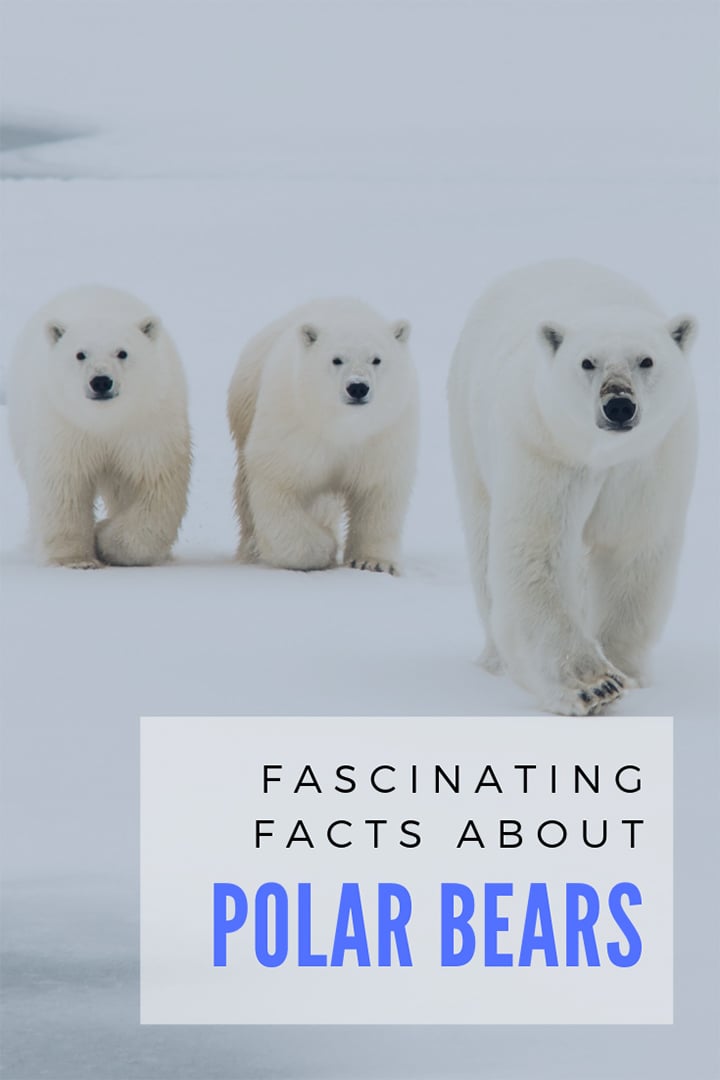 1. Climate change is threatening their habitat. Polar bears rely on sea ice to search vast areas of the Arctic Ocean for food. Sea ice is forming later in the year and breaking up earlier after winter than ever before. This is restricting the availability of food.

One of the biggest changes happened in 2006. A sudden decline in sea ice altered the shape of coastal areas in the Norwegian Arctic archipelago of Svalbard.

2. There are approximately 30,000 polar bears. The number is an estimate and could be up 5,000 too high or low. The real number will almost certainly never be known.

4. Polar bears roam into the territory of five countries. The subpopulations live on territory that us human beings consider part of Canada, Denmark (Greenland), Norway, Russia, and the USA. The five nations now work together on policy and projects to protect the species.

5. A 30% population decline is expected by 2050. The lack of food caused by sea ice reduction is a particular problem for pregnant females. They need to build up fat stores to live from when birthing and nursing cubs. Scientists disagree on the impact this will have. 30% is the most commonly quoted reduction, but some fear it could be much bigger.

6. Hunting began to be regulated in the 1950s. These creatures were hunted by indigenous populations for centuries. The Soviet Union banned all hunting of polar bears in 1956. Canada imposed quotas on the activity in 1968, and Norway introduced a series of regulations from 1965 to 1973.

7. Bears are a real risk for residents of Longyearbyen. Polar bear sightings have become more frequent in recent years near Svalbard's only significant settlement. Residents and visitors are only permitted to leave the settlement if they are armed. 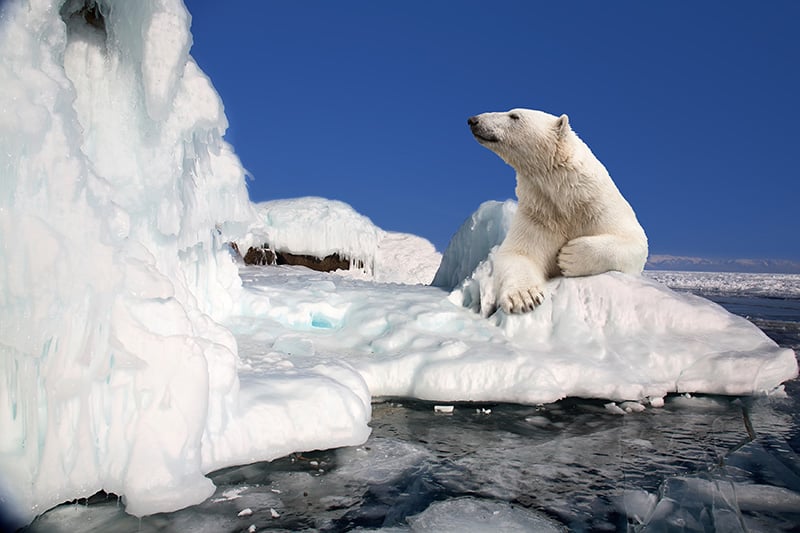 8. Polar bears are actually black! Their fur is actually translucent, not white. It appears white because it reflects visible light. Beneath it all, their skin is jet black. You can see this on their nose and on the pads of their feet.

9. DNA can be extracted from their footprints. A polar bear's DNA can be isolated based on a technique developed by WWF and the specialist firm SPYGEN. Even more surprising, tiny scoops of snow from a polar bear track also revealed DNA from a seal recently eaten by the bear!

10. Male bears weigh up to 800kg. Although a more typical weight is 500-750kg. They are the world's largest land carnivore. Its closest rival is the Kodiak bear.

12. Their preferred diet is the ringed seal. Although they will also make do with other animal carcasses, small mammals, birds, and even eggs and vegetation when hungry.

13. Males grow to twice the size of females. When fully grown, male bears can be up to three metres long.

14. Grizzly-polar hybrids exist. Recent genetic testing confirmed the existence of hybrids. They often behave more like polar bears as they are usually birthed by polar bear mothers. They are known informally as ‘grolar bears’ or ‘pizzly bears’.

15. They have an outstanding sense of smell. Polar bears can detect seal breathing holes in the ice from up to a kilometre away. The bears can even detect a seal in the water beneath a metre of compacted snow using their sense of smell.

16. Polar bears have 42 sharp teeth, which they use for trapping and eating prey. They use their incisors to rip off pieces of blubber and flesh, their canine teeth to tear through tough hide, and their molars to chew. That said, bears typically swallow food in large chunks.

17. Despite their size, polar bears have small tails. The tail is only 7 to 12 cm long.

18. They can swim for hours. At speeds of up to 6mph, polar bears can swim for long distances steadily without tiring. They do this regularly to move between ice sheets. Their large paws are well-suited to paddling through the water, while they hold their hind legs flat to act as a rudder.

19. The polar bear features on Greenland's coat of arms. The symbol was first introduced in the coat of arms of Denmark in 1666, and it is still represented in the arms of the Danish royal family. The current version of a white bear standing upright on a blue shield was designed by a Greenlandic artist in 1989.

20. It's the mascot of multiple sports teams. The list includes the hockey team Eisbären Berlin and the hockey team Charlotte Checkers. Two cowboy-themed polar bears acted as mascots of the 1988 Winter Olympics, held in Calgary.

21. It is the mascot of Hammerfest in Norway. Despite being hundreds of miles away from a polar bear, Hammerfest features the creature on its coat of arms. A large statue greets visitors arriving by road, while cruise ship passengers are encouraged to join the Royal and Ancient Polar Bear Society. Fun fact: It's neither royal nor ancient, so don't waste your money!