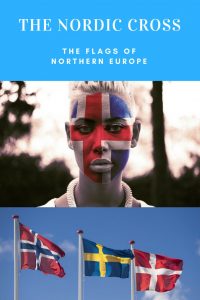 The Nordic cross features on the flags of all three Scandinavian countries and their Nordic neighbours.

A nation's flag is such an evocative symbol. Its patterns and colours immediately evoke strong feelings in its citizens, and strong stereotypes in others.

What do you think of when you see the stars and stripes of the United States? How about the arabic inscription and sword of the flag of Saudi Arabia?

The three Scandinavian countries share so much: language, culture, history, food and so on, but did you also know they share the same flag design?

The flags of Norway, Denmark and Sweden share a very similar design, which we'll talk more about later.

The only difference between the off-centred cross of the three countries is the colours.

Sweden has bright yellow on a deep blue background. Denmark uses white on red. The Norwegian flag is largely the same as the Danish one, but with the addition of a dark blue cross on top of the white cross.

Read more: The Flag of Norway

The design is also used by the two other principal Nordic countries. Iceland is the same as Norway but with the red and blue colours reversed, while Finland use a light blue cross on a white background.

What is the Nordic cross?

The shared design is known around the world as the Nordic cross. Originating first in Denmark, the distinctive cross is said to represent Christianity.

Its most important feature is the off-centred nature of the vertical line, which is drawn closest to the hoist edge of the flag.

According to a regulation for Danish merchant ships: “the two first fields must be square in form and the two outer fields must be 6/4 lengths of those”.

Nordic crosses outside the region

The design is not exclusive to the Nordic region. The cross can also be found on many regional flags within the Baltic countries Latvia and Estonia.

In fact, many people in Estonia have proposed altering their national flag with several Nordic cross designs proposed.

In the UK, the flags of the Shetland and Orkney islands are both of Nordic cross design. Both islands used to be Norwegian territory. Around the world, many other countries, territories, islands and regions also make use of the striking design.

The Flag of Orkney (pictured above) was chosen by public consultation in 2007. It is said to symbolise the islands' Scottish and Norwegian heritage.