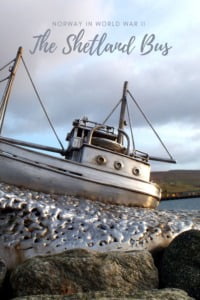 The Shetland Bus played a crucial role in the British-Norwegian resistance movement during World War II.

During the German occupation of Norway, most Norwegians knew that small boats were shuttling people and weapons between Shetland—an archipelago off the northeast coast of Scotland—and the west coast of Norway.

Under the cover of darkness, small fishing boats traversed the treacherous North Sea on secret missions. The boats were collectively known as the Shetland Bus. In Norwegian, the term was Shetlandsgjengen, or the Shetland Gang.

First informally and then as a formal part of the war effort, the Shetland Bus operated more than 200 trips. Soldiers, intelligence personnel and military supplies were transported along with those fleeing capture.

Together with Orkney, Shetland is steeped in Norse history and that legacy continues to this day. One can only imagine that local people were delighted to help the Norwegian resistance efforts.

How the Shetland Bus came to be

Once Norway was invaded by German forces, the Shetland Islands became a key defensive location for Britain. It also quickly became a key resistance route between Britain and occupied Norway.

At the beginning of the war, small Norwegian fishing boats were used to transport intelligence and supplies, and offer Norwegian refugees passage to Britain. The operation was under British command, but later it became a joint effort.

When the German guard along the Norwegian coast was tightened in 1943, the Shetland Bus switched to three smaller American submarine fighters. This increased the success rate of the missions.

Because of the need to travel at night in the winter, crews and passengers were in constant danger from storms. The risk of discovery by German patrols at sea and in the air was great.

Although disguised as fishing vessels, the boats were armed with guns concealed inside oil drums on deck. Several missions were unsuccessful and 44 men were known to have died during the transports.

“We armed the ships as best we ocould against chance encounters, always bearing in mind that to appear as innocent fishing boats might often be their best chance of survival, so that the armament had to be invisible except as close quarters” – The Shetland Bus by David Howarth.

The Telavåg Tragedy highlights the risks took by anyone travelling the route or assisting the operation. In 1942, locals in the small Norwegian village hid two British agents.

Two Gestapo officers and a Norwegian informer were killed upon the discovery. Occupied forces quickly took revenge, burning every house in the village. Women and the elderly were imprisoned, while adult men were sent to German concentration camps. Almost half never returned.

Who operated the Shetland Bus?

The boats were crewed by young albeit expert sailors and fishermen with extensive local knowledge. Many brought their own vessels but some used boats that were “stolen”, with the owner's permission, of course.

Popularly known as Shetlands Larsen, Leif Larsen was a highly decorated Norwegian sailor. He was arguably the most famous of all who operated the route. Of the 198 trips to Norway, Larsen completed 52 of them.

In 1943, Larsen and some of his crew escaped after German aircraft bombed his boat by rowing for several to reach the Norwegian coastline.

Following the war, Larsen received multiple medals in both Norway and Britain. According to Scalloway Museum, no other non-Brit has received more British medals.

“After he became skipper, he soon showed astonishing qualities of a rough and ready leadership and perfectly unshakeable courage, and a combination of confidence, bravado and luck which brought him through one adventure after another that would have broken the nerve of most men” – The Shetland Bus by David Howarth.

Kåre Iversen was another notable member of the gang. Discovered to be a member of the resistance, Iversen escaped capture to Shetland in the early days of the war. He then joined 57 trips across the North Sea. Following the war, he married a Scalloway girl and fathered three daughters.

The village of Scalloway is now the centre of memories of the operation. Scalloway Museum hosts a permanent exhibition.

A small metal sculpture (pictured above) commemorates the service and those killed. The memorial sits on a plinth of rocks taken from the birthplaces of the 44 Norwegian crew that died during the operation. Their names are detailed on a plaque at the base of the sculpture.

Much of what we know today about the operation is thanks to the 1951 book, The Shetland Bus. Subtitled A classic story of secret wartime missions across the North Sea, the book chronicles the period through the perspective of junior naval officer David Howarth who helped set up the base.

A few years later, Howarth's book was used as the inspiration for the British-Norwegian film Shetlandsgjengen. Released in English as Suicide Mission, the film featured many real-life members of the Shetland gang playing themselves, including Leif Larsen.

5 thoughts on “The Story of the Shetland Bus”