From devastating fires to hidden crypts, the story of Stavanger’s medieval cathedral is a fascinating one. Let's take a look at the city’s most treasured building through the centuries.

Stavanger’s most cherished and best-preserved building is the city’s cathedral. Stavanger domkirke has much to be admired, inside and out.

The cathedral is a symbol of Stavanger and its importance to the area can be gauged from its central position. The history behind this iconic building over the centuries is an intriguing one to say the least – let’s take a closer look.

Where is Stavanger cathedral?

Stavanger cathedral lies in the heart of the Stavanger, just a short walk from the city’s main shopping area. It’s also just a stone’s throw away from the train station and main bus terminal.

The cathedral sits in a borough known as Storhaug, slightly back from lake Breiavatnet. The entrance is on the west side. This is the side of the building that faces onto the city’s main square and down to the harbour area and Vågen.

The building’s central setting is no coincidence, it highlights the cathedral's importance to the city and the county of Rogaland in its early history.

The construction of Stavanger cathedral started around the year 1100, but it wasn’t finished until nearly 50 years later in 1150 (estimated). This timeframe corresponds with Sigurd Jorsalfarer naming of Stavanger as a cathedral city in 1125. Although, there is still some debate about which came first – the city or the cathedral?

It’s claimed that Bishop Reinald, a bishop from Winchester in England, started and supervised the cathedral’s construction. When it opened, it was operational within the Roman Catholic Church until the Protestant Reformation.

Read more: Was Stavanger Cathedral Built on a Viking Settlement?

These days it’s part of the Church of Norway and remains a fully functional cathedral. It is also recognised as the oldest working cathedral in Norway.

The cathedral was initially been built in an Anglo-Norman style, but a fire in 1272 brought about a change. The fire caused such devastating damage to the original wooden architecture that the cathedral had to be entirely rebuilt.

The new construction was managed by Bishop Arne between 1276 and 1303, and it saw the cathedral take on a very different look. Wood was replaced with stone and it was built predominantly in a Romanesque/Gothic style.

Over the years, the cathedral has had various additions. In the 1650’s, a new pulpit designed by Andrew Smith was added. In 1957, new stained glass by Victor Sparre was installed to east side.

In recent years, the building has been undergoing a period of restoration works, these have mostly taken place on the building’s east-facing side and remain ongoing today.

Although it might not look very big, the cathedral is deceptively large with a capacity for 800 people. Inside, there is one large central nave (aisle), and either side of that two smaller elongated sections.

Two lines of great, round pillars separate the nave from the side parts. Interestingly, each of the pillars has figures from the scenes of Ragnarok (Scandinavian ‘End of Days’).

The roof of the cathedral is similar to, and said to be inspired by, the hulls on Viking ships. It’s simply turned upside down but performs the same purpose as it did on those great sailing vessels – it keeps water out.

Did you know that below the cathedral there is a crypt that is believed to be an ancient church? Literature states it was there before the 1100-1150 cathedral. It is said to be the remains of an old wooden church built in 1015 (estimated) by Erling Skjalgsson.

There are a number of tapestry items in the cathedral made by local textiles artist Frida Hansen. One of them is a carpet hung on the wall of the holy Saint Olaf. She is also responsible for one of the altar cloths, in addition to the carpet in the altar ring.

The cathedral was built in an area overlooking Vagen, a settlement said to consist of just a few hundred people at the time it was built. It's mostly from this central point that over the centuries Stavanger grew gradually, expanding outward to the city that we see today.

Due to restoration works, Stavanger cathedral is unfortunately closed to visitors until 2022. However, it's still worth a visit to admire the exterior in the meantime.

The building can be appreciated from many different angles and the grounds are always impeccably well kept. After that, there is always a leisurely stroll around lake Breiavatnet to enjoy. 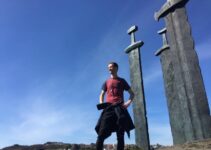