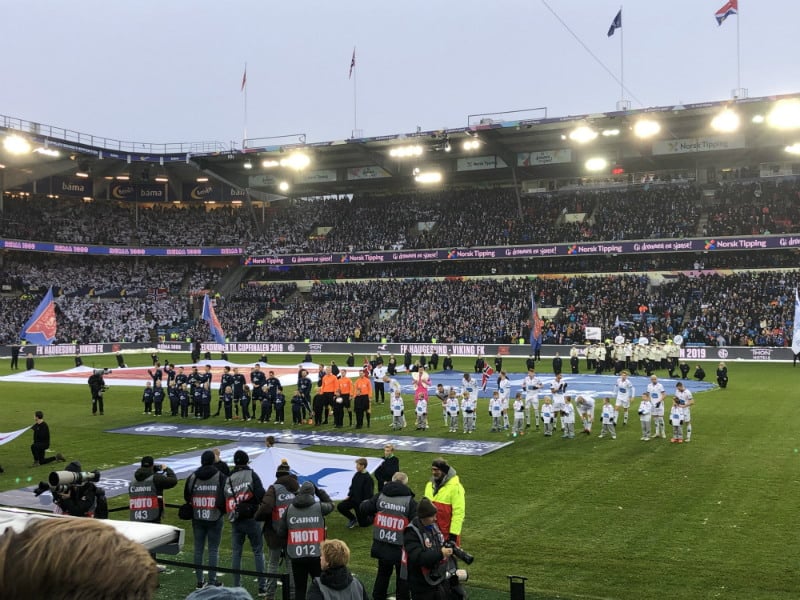 The sights, sounds and thrills of the Norwegian Cup Final. It's not just about the game itself but the buildup, the atmosphere and the passion.

I left my apartment in central Oslo around noon and made my way to the tram stop around the corner at Frydenlund. The air was bitterly cold, and the gloom meant it barely felt like daytime. The city was under a blanket of grey cloud, brightened only by the snow that covered sidewalks and the shining lights of passing cars.

Along came the number 18 tram, rattling to a stop. I hop onboard into a full carriage. Amongst the ordinary passengers, who were going about their average Sunday afternoon, was a mix of the white of Haugesund fans and the dark blue of Viking. My colours were partially obscured by the heavy coat I had on; underneath, though, was my Viking shirt and team scarf.

A man in a Viking hat asks me, “går til spillet?” “Ja,” I say, just as the tram shudders to yet another halt but this time at John Colletts Plass, my stop. The doors slide open and an icy blast of cold air takes my breathe away for a moment. The tram is almost emptied as people brave the elements, most for the love of the beautiful game.

Back in the gloom, the swarm of bodies move like ants making their way back to their underground nest. Those in white and those in dark blue and those in coats like mine, whose allegiance is undetectable. They move collectively in one direction – down along the snow-covered sidewalks, towards a bright light in the distance that illuminates a grey sky.

Outside the stadium, the crowds are heavier still. Old faces, middle-age faces and many children’s faces that beam with excitement. ‘Program. Det er gratis?’ said a soft voice out of the nowhere. ‘Ja, takk,’ I reply, taking the booklet from her.

On the front cover is a picture of a sparkling silver trophy set against a dark blue background. It’s a sign, I think to myself, it's a sign. 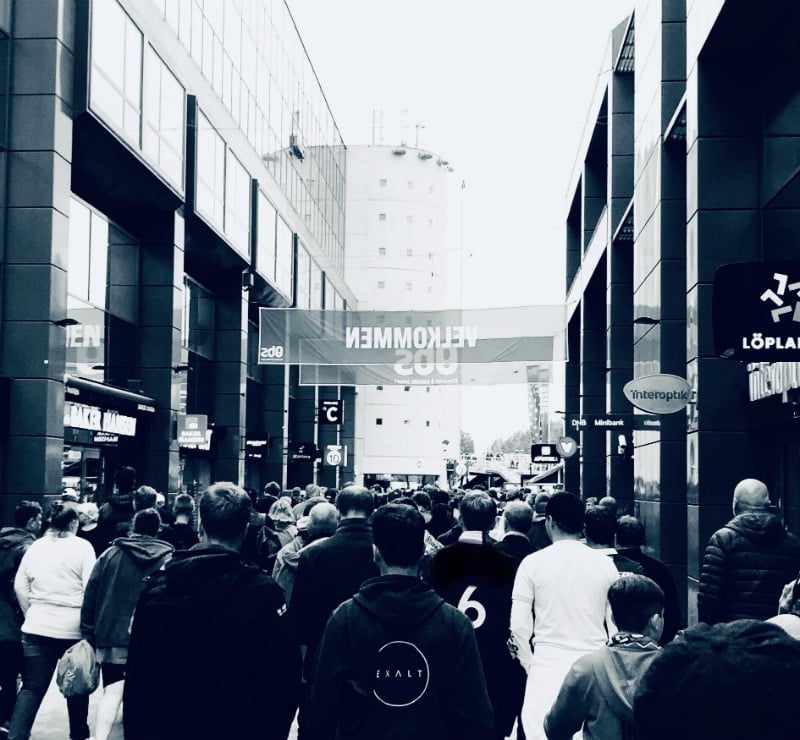 I glance down at my match ticket to try and figure out which entrance I need go to … one, seven. one, seven. Now I’m caught in a tide of bodies again that funnel through a narrow walkway and past the players and officials’ entrance. Inngang 17 – this is it. The queue is relatively short and fans shuffle in at a steady speed.

Inside, under a cavernous part of the main stand, I walk past several coffee-drinking Haugesund supporters, recognisable from their draping white scarves and two kids (both Viking fans) who are hastily splitting a Kvikk Lunsj between them. I have marzipan for halftime, I think to myself – something that had become a tradition for me at Norwegian football matches over the years.

I walk up some steps towards the bright lights. There is a general grumble of many people together in one place and music that echoes in the only way it can inside a confined arena. The excitement builds even more as the stairs level out and it all comes into sight. There she is, Ullevaal Stadium.

I’d never seen the stadium more alive. There was a collective air of expectation as the players leave the field having finished their respective warmups. In front of me and to my right, the white of the Haugesund fans, who chanted away: ‘HAUGESUND! HAUGESUND! HAUGESUND!’

Here I was, inside Ullevaal, about to watch another Viking match, just like I had done many times during this rather remarkable year for the Stavanger club. A year which includes a fifth-place finish in the league. But this game felt different. It was a cup final. My first Viking cup final.

The teams emerged from the tunnel of the main stand. The whole stadium comes to a collective rise in cheers and applause as both sets of fans show their appreciation for the occasion, and more importantly, for their respective teams. After the national anthem and team photographs are out of the way, the players take their positions on the soggy-looking Ullevaal grass. 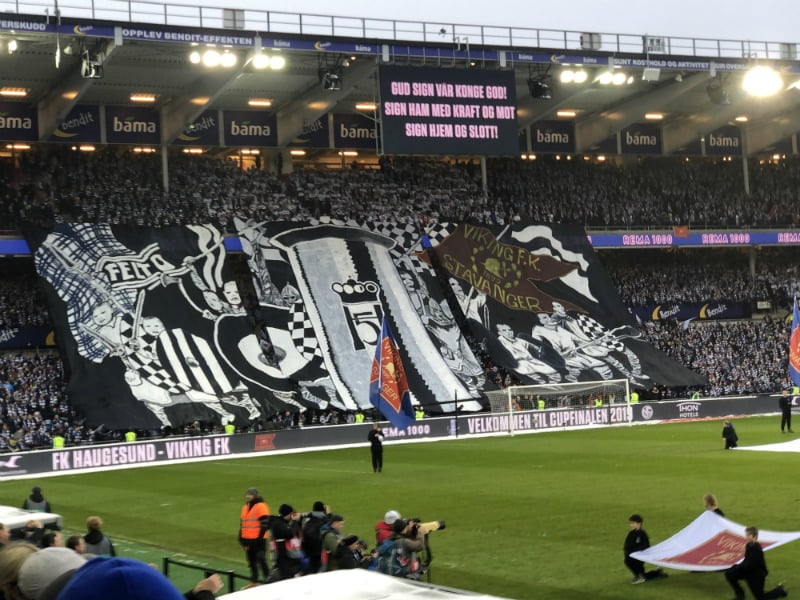 Once in place, after a glancing look at both goalkeepers and briefly at his fourth official, the man dressed all in black puts the whistle to his lips and signals the start of the match.

It’s a nervous first half from both Rogaland clubs, and each set of fans share that sense of unease in the stands. Half-time: FK Haugesund 0-0 Viking FK.

The second half starts much in the same fashion, and there really is a feeling that the game could go either way. Then, in the 51st minute, just over five minutes into the half, De mørkeblå (the dark blues) win a penalty. It is awarded after our captain, Zlatko Tripić, is deemed to have been barged to the ground by a Haugesund player. It is a dubious one.

After a nervous wait, Tripić slots the resulting spot kick home in composed fashion and sends the Viking faithful into raptures. More nervous moments of play follow with chances at both ends and the odd bad-tempered incident until …

The final whistle is blown – it’s all over! It sends all Viking fans into jubilant celebration. Meanwhile, the majority of the Haugesund fans surge for the exits, only a handful deciding to stay and watch the celebrations. 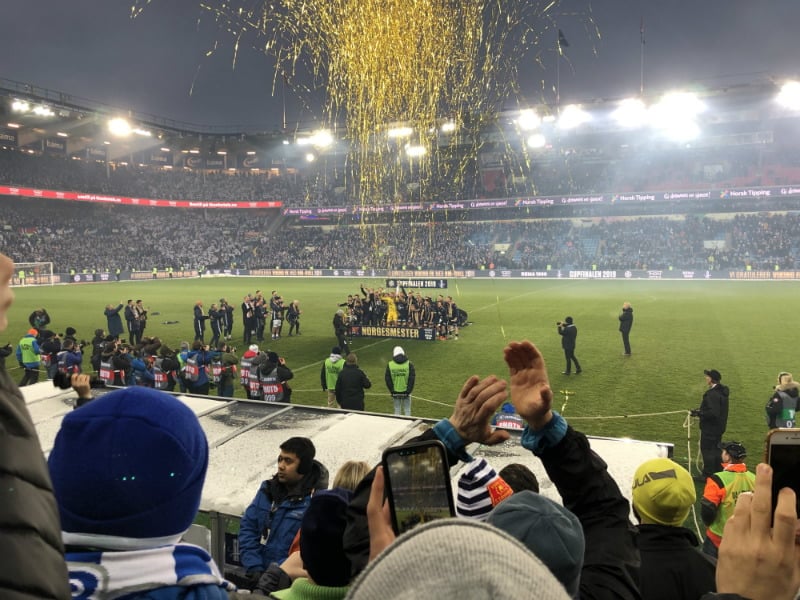 My feet are frozen and my whole body is shaking from the cold, or was it the adrenaline of winning? I couldn’t distinguish. I didn’t care. I watch on as the players lift the trophy as Queen’s ‘We Are The Champions’ blasts out. 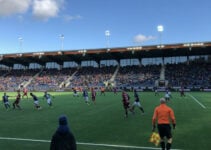