Skip to content
Home » Living in Norway » 10 Years On: The Utøya Tragedy Remembered 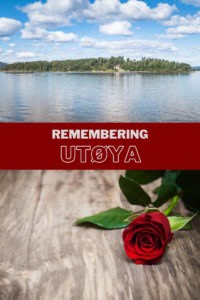 We look back at the tragedy of the Oslo bombing and Utøya terror attacks that saw 77 people killed in the summer of 2011. It was the deadliest incident in Norway since the Second World War.

On a quiet July afternoon in Oslo, a bomb hidden inside a van exploded in the government quarter, the starting point of an afternoon of barely believable terror.

Shortly afterwards, politically-engaged teenagers were targeted at a summer camp on a peaceful island. Before the day was out, 77 people had been killed and Norway was forced to face up to a new reality.

It's hard to believe it's been 10 years since the events of Oslo and Utøya. They were some of the first things I wrote about on this blog, taking place less than three months after I moved here from the UK. I learned a lot about my new home country in the weeks that followed.

The upcoming 10th anniversary has refocused attention on the incident, the aftermath and the long-term impact. Many people feel that Norway handled the immediate aftermath well, but more questions have been asked recently.

Much has happened over the past ten years, but there's much still to be done. For one thing, the government quarter that was torn apart in the bombing is still yet to be rebuilt.

Arguments over appropriate memorials have been long and frustrating for many, while the long-term impact on survivors is also back in the spotlight.

Norway will take a collective look back at the events shortly as the tenth anniversary thrusts the events back into the national spotlight.

Various events are planned to commemorate the terror attacks in both Oslo and on Utøya island.

The twin attacks were carried out by 32-year-old Anders Behring Breivik.

He drove to Oslo's government quarter in a van loaded with a homemade bomb. At 3.25pm, nine minutes after he calmly walked away, the bomb detonated.

Nine people died from the bombing, a number which would have been significantly higher had it not taken place in the middle of Norway's shared summer vacation period.

Shock and confusion quickly spread across the Norwegian capital. But things were about to get much worse.

Breivik drove 40km to the small island of Utøya in the Tyrifjord. Here, hundreds of teenagers were attending a summer camp for AUF, the youth wing of Norway's labour party.

Dressed as a police officer, Breivik took the ferry to the island with the pretence of providing protection for the summer camp. Upon arrival, he methodically moved around Utøya firing and killing victims. He reportedly yells phrases such as “You are going to die today, Marxists.”

In the aftermath of the Oslo bombing, the response to the events on Utøya was confused and took time. By the time police apprehended Breivik, he had killed 69 on the island.

More than 500 survived, many by hiding for several hours in the woods. Others swam into the cold water of the Tyrifjord from where they were rescued by locals.

The aftermath and trial in Oslo

Norway's immediate response surprised and impressed many around the globe. Then prime minister Jens Stoltenberg summed things up by saying, “our response is more democracy, more openness and more humanity.”

The criminal trial began nine months later in April 2012, with a media circus camped outside throughout. Breivik did not deny the events, so much of the focus settled on whether he was criminally responsible or would be judged clinically insane.

Breivik was ultimately found “sane” and guilty on terrorism charges. He was sentenced to 21 years in preventive detention with a minimum term of 10 years. This is Norway's maximum allowable sentence. Since then, he has been kept in isolation.

The struggling survivors of Utøya

In 2020, researchers from the Norwegian Centre for Violence and Traumatic Stress Studies published results from the latest in a series of studies on the Utøya survivors.

It found that one-third of the survivors suffer from symptoms equivalent to or very close to post-traumatic stress disorder (PTSD).

Almost half of the participants in the study still experienced symptoms of anxiety and depression. A similar proportion suffered from considerable, long-lasting sleeping disorders.

“It is very serious that so many, too many, are struggling with these problems over time,” said project leader Grete Dyb. In Science Norway, Dyb said the results were “discouraging”, as there had been no decline in the number of struggling survivors since the interviews held just 14 months after the attacks.

Of the Utøya survivors, one-in-three said they do not have access to the help they need. Dyb belives health-related help schemes for the survivors were dismantled too soon.

The original proposal for a striking memorial that would feature a gash through the island was finally abandoned several years ago following public disagreement.

Opposition from neighbouring communities has continued, but has not failed to stop the construction of a national memorial at the Utøya quay. However, the memorial will not be finished in time for the 10th anniversary.

“Everyone has underestimated the symbolic power of this wound. It's a sign that we are not healed,” said VG's Andrea Gjestvang to the Financial Times. Gjestvang went on to compare the situation to the 9/11 memorial controversies in New York: “People are more united in the beginning, and then they start to disagree.”

22 July in books and film

The events of 2011 have been recorded in various book and film projects over the past decade.

On Netflix, 22 July focuses on the story of one survivor struggling to come to terms with the incident. It would have been very easy to focus such a movie on the tragic events on the island. While that's of course featured, the film focuses in much more on the experience of the one teenager after the day itself.

For a more in-depth look, I recommend the book that inspired the movie. One Of Us by Norwegian journalist Åsne Seierstad opens with a harrowing tale of what it was like to be stranded on the island with only the sound of gunshots for company:

The heavy rain had eased off, but some last drops were still trickling down their necks and sweaty cheeks. They took in as little air as possible, trying to breathe without a sound. A raspberry bush had strayed out onto the cliff. Wild roses, pale pink, almost white, were clinging to the dance. The they heard footsteps approaching.

She then proceeds to explore the history of Anders Beiring Breivik from his troubled childhood to his right-wing activism and online gaming addiction, all through the lens of his lengthy trial in the Oslo courtrooms. You can read more about the book here.

2 thoughts on “10 Years On: The Utøya Tragedy Remembered”