Skip to content
Home » Viking Blog » Viking Money: From Bartering to Coins in the Viking Age 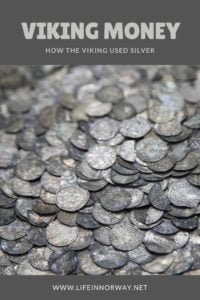 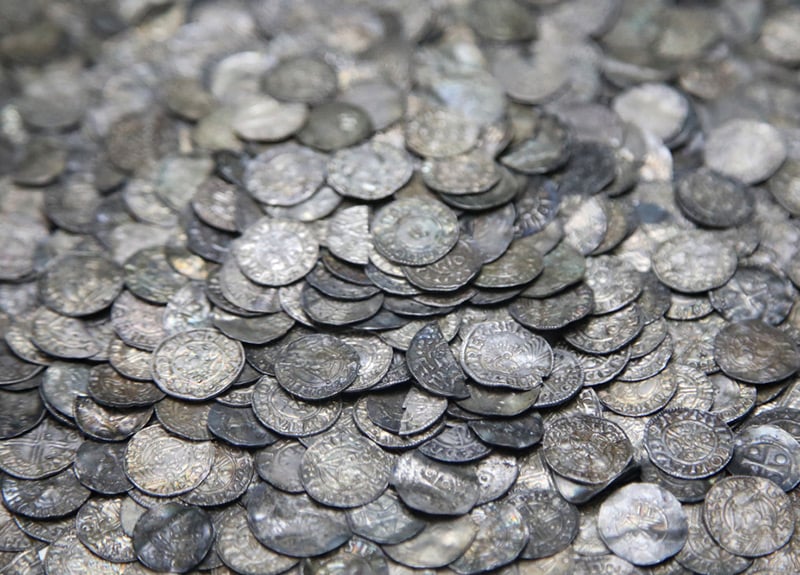 For almost three thousand years, humans have been using coins as payment. As that winds down in an increasingly cashless world, let’s take a look at how the Vikings dealt with money.

A trading life before coins

Like most civilisations, the history of the Vikings began with an economy based on bartering: ‘You have a sheep, I have some grain. You need some grain and I need a sheep, so how about we swap?’

This works well for small transactions between a couple of people who can each fill the other’s needs.

But what happens if you need some grain and you don’t have a sheep? Or if you need 100 sheep but you don’t need 100 sacks of grain? You’re gonna need some kind of token of value that can be used instead of goods.

Initially, and again like many civilisations, the Vikings developed a bullion economy, using precious metals in place of commodities. Silver was the main precious metal of the day as it was relatively common, but they also used gold.

As the value of precious metals grew, they became associated with wealth and the more affluent Vikings would wear silver jewellery and use silver weapons. For trade, the silver could be formed into bars and ingots, or simply traded as jewellery.

Often pieces would be cut into pieces known as ‘hack silver’ when smaller amounts were needed.

Around this time, most other civilisations and cultures were already well-versed in the use of metal tokens specifically designed for the purposes of trade.

King Alyattes of Lydia, now part of modern-day Turkey, is widely considered to have produced the first coins, known as Lydian Lions for the image stamped on them, in around 600 BCE.

The Vikings encountered coins through two routes. The first was through trade. The Silk Road, stretching from China to Southern Europe, allowed goods and ideas to flow between the East and the West. It also brought coins and it’s likely that the first coins to be known in Scandinavia were from the Islamic countries.

The second route, as you’d no doubt expect from Vikings, was through raids in Viking ships. Coins were well established in Northern Europe, including the Anglo-Saxon kingdoms of the British Isles. From the initial raids on the East coast the Vikings quickly became familiar with coins.

Continuing through to the establishment of the Danelaw – the vast swathe of Northern and Eastern England ruled by the Danes – the Vikings managed to amass a large quantity of coins without making their own. Eventually, however, that would change.

A large part of the impetus behind the Scandinavia Kings developing coins was that they were seen as a sign of civilisation. Lumps of metal are for barbarians and coins are for refined people. The Vikings understood that they needed to work on their image to improve their appearance to the rest of the world!

Known mints in Scandinavia sprung up towards the end of the 10th century. The Danes in Britain had enforced what was known as the Danegeld. Initially it was raised as tribute to the Viking invaders to effectively pay them off and stop them attacking. Once the Danelaw was established it was kept on as a land-tax.

The English coins gained through the Danegeld became the prototypes of the first Danish coins and often included the same imagery even though they were minted in Denmark.

The first known coins were issued by Sweyn Forkbeard and continued under Cnut. Coins were mostly made in Lund but there were also mints at Ribe, Hedeby and Aalborg.

Norwegian coins also start around the same time under the authority of Olav Tryggvason, who had also been a commander of Viking forces in Britain.

Initially they were silver pennies with a weight of around 0.89g but over time the amount of silver was lowered in favour of copper. Under the reign of Harald Hardrada, who had experience of currencies during his time with the Byzantine emperor, a national currency was established.

Sweden was also experimenting with coins in the 990s under Olof Skötkonung who issued coins with his image and title. This was mainly around the town of Sigtuna near Stockholm. 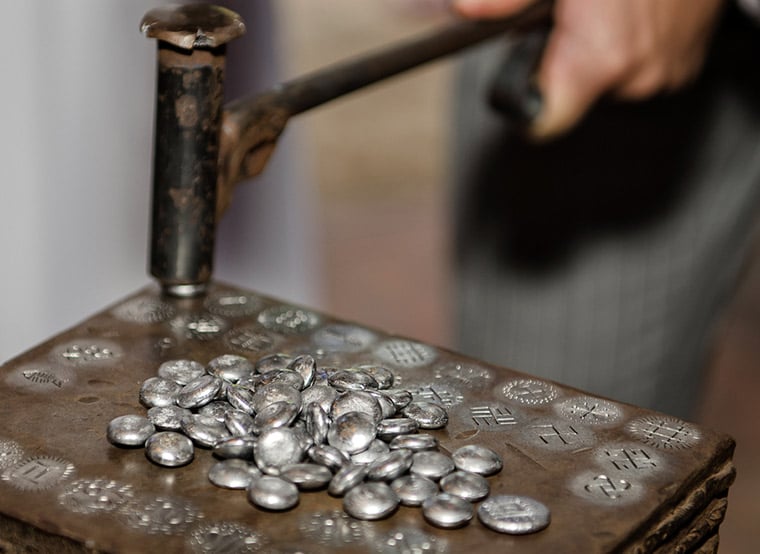 His successors Anand Jacob and Canute I also minted coins at Sigtuna. These coins were fairly primitive compared to others of the period and were likely intended as payments to soldiers rather than for use in trading.

There are two main ways of minting coins. You can either melt metal and pour it into moulds to make cast coins or you can make discs of metal and then hammer an imprint into them to make struck coins. Cast coins were only really made in the Far East. Most of the rest of the world, including Scandinavia, made struck coins.

Ingots – usually of silver, but other metals were used – would be heated. These were then beaten into thin sheets and circular blanks would be punched or chiselled out. Patterns were etched into iron – a much tougher metal than silver or gold – to create dies.

Then, they simply placed the blank between the two dies and hit the top die with a hammer. The image from the die turned the blank metal into a coin.

This is essentially the same process used to make coins today, although mechanisation and industrialisation have allowed production to become much faster and more uniform…and also much less dangerous!

The first coins issued by Sweyn Forkbeard in Denmark were identical to the English coins, even down to the image and name of the English king. This was likely down to the Danes simply taking the dies from Britain back to Denmark and using them.

The same was also true of Norway and Sweden, whose early coins were either heavily inspired by or exact copies of English coins. The first coins issued by Olaf Tryggvason were an exact copy of coins issued by Æthelred II in England.

Shortly after, the coins started to bear the image of Sweyn and the inscription ‘ZVEN REX AD DENER’ and ‘GOD-WINE M-AN D-NER’ for Sven, King of the Danes and Godwine Moneyer of the Danes respectively.

From there, coins continued to borrow from other cultures. Christian imagery was often included despite the Vikings still being mostly pagan. The Byzantine coins also influenced Scandinavian money at various times.

Scandinavian coins did also include some images from Norse mythology such as Thor’s hammer and often both pagan and Christian imagery would appear on the same coin.

Some scholars have suggested that the inclusion of both types of imagery helped in the conversion from paganism to Christianity that started under Olaf Tryggvason.

Viking money in the ground

It’s really useful, from a historical point of view, that people from ancient times right through to the modern era were quite fond of burying things! There were no formal banks to look after money, of course, and a chest with a lock is only secure up to a point.

And whether it’s grave goods to see the deceased into the afterlife or to protect wealth from marauders and opponents in battle, the ground gives us our greatest clues about life in the past.

So, most of the evidence we have for Viking coinage comes from archaeological finds in the British Isles and Scandinavia. Known transport routes such as rivers and ancient roads often present vast hoards of buried wealth.

We can rarely know for sure exactly who buried things, and why, but dating techniques and comparing with history can sometimes narrow it down.

One of the first major discoveries was found by the banks of the River Ribble near Preston, Lancashire, England in 1840.

At the time the Cuerdale hoard was the largest such hoard of Viking silver discovered and remained so until the end of the 20th century. The hoard contained more than 8,600 items of silver including coins, jewellery, hack silver and ingots.

The Ribble Valley was an important route between the York and the Irish Sea. The hoard found in Cuerdale dates to between 903 and 910, which was shortly after the Vikings were expelled from Dublin.

So, the hoard may have been a war chest belonging to Vikings that had been exiled from Ireland who intended to try and reoccupy the country via the Ribble.

Other theories have also been proposed. One is that it could have been a gift to the churches who were suffering persecution from the then-pagan Vikings in the Danelaw area.

Another is that it wasn’t buried in Viking times at all but was buried in the 14th century at the urging of Richard II. The final theory is that it was simply intended for a nearby casting works.

In 1999, a film crew from TV4 were interviewing an archaeologist about looting from dig sites. Spillings Farm near Slite had been chosen as a few coins had been found there in the past.

After filming, the archaeologist Jonas Ström surveyed the field they were using and received an overload signal from their equipment.

They quickly cordoned off the area for investigation and soon discovered three large deposits, two of silver and one of bronze. Once safely extracted, the two silver hoards together weighed 67kg or 148lb and the bronze hoard was 20kg or 44lb.

The Spillings hoard became the largest hoard of Viking silver ever found and remains so today. The hoards had been hidden under the floorboards in a Viking outhouse at some point in the 9th century.

Many of the coins had cut marks, probably indicating that they’d been tested for purity, and overall there were coins from 69 minting locations in 15 present-day countries.

Many of the coins from these finds are owned by museums around the world and are on display. The Cuerdale hoard is owned by the British museum and the highlights from it can be viewed there.

Some of the items have been gifted to the Ashmolean Museum in Oxford and some of the Frankish coins are held by the Château-musée de Boulogne-sur-Mer in Northern France.

The Spillings Hoard is on display at the Gotland Museum along with many other finds on the island. Overall, 1,000kg or 2,200lbs of silver have been discovered in Gotland, including silver coins from the Arab world, Africa and Central Asia.

Some modern-day Viking societies offer the opportunity to mint your own Viking coin replicas at Viking shows and festivals.

Oddly the quality of the modern-day replicas is far better than the originals would have been, though of course they use cheaper metals than silver!

1 thought on “Viking Money: From Bartering to Coins in the Viking Age”