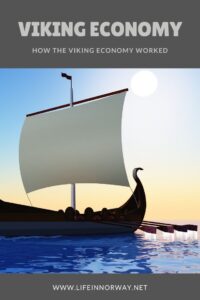 Most of us know the Vikings used ships to launch raids on other lands. But they were also a key tool for trading, which fast became a cornerstone of the Viking economy.

If you want progress you need to trade. If you want to trade you need an economy. So how did the northmen go from a bunch of hardy farmers to dominating trade routes reaching throughout much of the northern hemisphere?

Let’s go to school and see what we can find out about Viking economics!

As far as we can tell, humans have been trading with each other for almost as long as we’ve existed.

The first evidence of trade dates back to the stone age where obsidian and flint were traded over distances as far as a few hundred miles. These materials were prized for making better, sharper tools and for making it easier to start fires.

Fast forward a few thousand years and a few enterprising young upstarts invent farming. Domesticating crops and animals allowed for permanent settlements and the ability for tribes to create their own food rather than relying on hunting and gathering.

That’s pretty much where we pick up the story of the Vikings. In the beginning the Norse people were, like the rest of the world, mostly subsistence farmers. Each family or group would grow the plants and rear the animals they needed to live on. Some bartering would take place between groups to smooth out surplus and diversify crops.

This is all well and good and kinda worked for hundreds of years. But what happens when there’s a problem? A wolf comes and kills your animals, or a cold snap freezes your crops to death, and you have nothing. You have two solutions – take what you want from other people by force, or trade what you have for what you need. Not surprisingly, the Vikings did a little of both!

Viking is as Viking does

No one is entirely sure what first led a group of hardy young farming folk to take to the seas. Perhaps it was local overcrowding, meaning it was harder and harder to grow enough crops for a family’s own use. Or maybe there was some innate wanderlust and spirit of exploration and discovery.

Either way, the Vikings were truly born with the first major raid on the Holy Island of Lindisfarne, just off the coast of Northern Britain, in 793.

A scholar from Northumbria, Alcuin, wrote:

Never before has such terror appeared in Britain as we have now suffered from a pagan race … The heathens poured out the blood of saints around the altar, and trampled on the bodies of saints in the temple of God, like dung in the streets.

This introduced the Vikings to the outside world, and also gave the Northmen knowledge of the riches of the church. Raiders returned to Scandinavia with plundered items, which fed into the nascent Norse economy.

Trading with the world

Unfortunately, when you’re sailing around the world plundering whatever you can, you eventually meet some resistance. The Vikings knew when they had met their match, or when raiding was more trouble than it was worth. So, if they couldn’t raid, they would instead set up trade links.

As the Vikings continued to go from strength to strength, so they established greater and more extensive trade routes. At the height of their influence, the Vikings participated in, or controlled, a network stretching from North America in the West to the Caspian Sea in the West, all the way down to the Islamic world and across Asia.

Barter gave way to bullion as a means to trade. Instead of swapping a sheep for a bag of grain, people would instead use precious metals in various forms – lumps, ingots and eventually jewellery – as a kind of ‘store of wealth’.

Silver was mostly used as it was abundant enough to be distributed plentifully and hardy enough to resist tampering. By the 9th century, silver formed the backbone of the entire Viking economy.

Most of the silver was obtained from voyages to the Islamic world thanks to the large silver mines near Baghdad. Once these were exhausted, the northmen turned their attentions to Central Europe, where the Harz Mountains in Germany provided another excellent source.

A bullion economy requires the use of scales to determine the exact quantity of metal as well as the means of testing its purity. Traders used scales, many of which folded up to make them easily portable.

Weights of a known and trusted weight were imported from abroad in the form of either barrel-shaped or dice-shaped lumps, marked with the weight they represented.

Having an economy and a large amount of silver flowing around the country helped local trade within Scandinavia. A whaler from the coast might have a large amount of goods and have no need for the crops and animals that farmers had to offer. But now, people could buy things without the need to offer goods in exchange.

This also allowed for the rise of artistry and crafting. Whalebones, for example, were used to craft a huge range of personal items from combs and needles to board games and ornaments. Seal and walrus skins gave a particularly strong form of leather and walrus tusks were particularly valuable.

Trading towns sprung up throughout the region, usually centrally along the coast. This allowed them to host visitors from inland and abroad. The largest trading centres of the age were Birka in Sweden, Kaupang in Norway and Ribe and Hedeby in Denmark.

The Vikings also established trading towns across much of modern-day Russia. Each town was ruled by a King who levied taxes on imports and exports in exchange for protection from raiders.

To trade around the world you need established routes that are easily navigable to get goods from one place to another. Viking ships were a common means of transport, but the Vikings weren't just seafarers.

Probably the most famous trade route in history is the Silk Road. Actually a network of trade routes, the Silk Road stretched all the way from Easter China to Persia and made its name from the lucrative silk trade that took place along its length.

From Persia, a number of trade routes spread out North. The Volga trade route headed up to the West of the Caspian Sea through the land of the Volga Bulgars in modern-day Russia.

The other route travelled from Constantinople, across the Black Sea, through modern-day Ukraine and Poland before crossing the Baltic.

What did the Vikings need to buy from the rest of the world? Scandinavia is great for growing some things. Spices and flavourings such as caraway, thyme and mustard grew fine, but spices such as cinnamon only grow in hotter countries.

Glass was also much prized by the Norse. Glass was made into beads and used as ornamentation. Åhus in southern Sweden and Ribe in southern Denmark were major centres for glass bead production.

Silk became sought after in Scandinavia too. The finest silks from Byzantium and China were used to indicate status and wealth. Silk is found in many Scandinavian archaeological finds as its hardiness makes it more likely to survive in the ground for long periods of time.

The Vikings also imported wine from the vineyards of Germany and France. Wine was also seen as a status indicator and was definitely a drink of the wealthy.

What did the Vikings have to offer the world? The answer is plenty!

While the climate in the north isn’t that great for growing certain things, there are other things that are abundant in and around Scandinavia that are not found elsewhere.

Pine trees, for example, drip resin, which fossilises to produce amber. Amber was a highly prized commodity for ornaments and the North Sea and Baltic coasts had tons of the stuff! Craftspeople would work the amber into beads and other ornamental objects before trading for other goods.

Cold weather gives rise to a large number of different species of animals with especially thick fur. Throughout history, fur has been prized for its luxury as well as its utility.

Pine martens, foxes, otters, beavers and bears all provide excellent fur for clothing and furnishings. Sheepskins would also grow thickly in the North and so the Vikings were skilled weavers and spinners.

Down, or soft feathers, from large seaducks such as the eider is a particularly soft and luxurious way to keep yourself warm at night. Scandinavia has a lot of coast and a lot of eiders around the coast and, as gathering the feathers was a risky and sometimes fatal profession, it was left to those who were highly skilled.

One other commodity that the Vikings had to offer was manpower. The Vikings reputation for ruthlessness was well known around the world and Vikings would often work as mercenaries and raiders for hire.

One side-effect of raiding and pillaging around the world is that you come into contact with large quantities of strong, fit men. Once you conquer them, the ones who are left alive are there for the taking.

There was a huge demand for slaves around the world. Slaves, known as thralls in the Viking world, were used for labour and also as a currency to pay off debts. Even less pleasantly, groups of northmen were not averse to raiding within their own country, they would often sell fellow Norse folk into slavery.

The end of the Viking economy

All good things must come to an end and, at a similar time to the decline of the Viking Age in the early 11thcentury, so the trade routes that formed the backbone of the Scandinavian and global economies started to come to an end.

Trading towns started to decline as Europe shifted to a bulk economy. Trade no longer needed to take place individually, in towns, and so they quickly diminished before vanishing altogether. At the same time Royal power was on the ascendency and economies started developing into something that would be more recognisable today.

The rise and fall of the northmen took place quite quickly. However. during that time they built a strong Viking economy that stretched Scandinavian influence to all parts of the world.