Skip to content
Home » Viking Blog » Vikings in Iceland: The ‘New World’ of the Viking Age 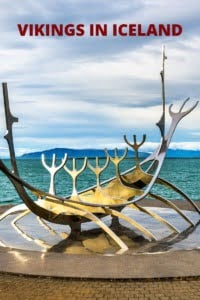 Iceland played a key role in the latter years of the Viking Age. Let's take a closer look.

The Viking connection is big business for Iceland. While there have been no Viking ship excavations as in Norway or any runestones found as in Sweden, Iceland still has plenty to draw those with an interest in the Viking Age.

Throw in the stunning natural landscapes and relaxing hot springs and it’s the perfect getaway for history buffs. But as with all historical travel, it’s worth taking some time to get to know the basics before you travel to make the most of your trip.

The history of Viking settlement in Iceland

While they were the first settlers, the Norsemen weren’t the first people to have ever set foot on the island.

Irish monks were known to have visited Iceland and perhaps lived there for a short time. However, when the first Scandinavians arrived sometime in the ninth century, most likely by accident, they found an empty island.

Unlike the raids on the British Isles and parts of western Europe, the trips to Iceland were purely about settlement.

The people who initially settled came predominantly from Norway, although there is evidence of some women from the British Isles among the early population. Whether they were willing participants in the new settlement isn’t known.

Discover the Icelandic sagas in Reykjavik

One of the reasons we know so much about the Viking Age is through the richly-described and illustrated Icelandic sagas.

Early Nordic culture was an oral one, and so although the sagas describe events during the ninth, tenth and early eleventh centuries, they weren’t written down until the twelfth, thirteenth and fourteenth centuries.

This means their historical accuracy and the amount of artistic license taken over the years cannot be truly understood.

Discover these sagas for yourself at Reykjavik’s Saga Museum. Many important moments from the sagas are highlighted and explained through exhibitions and an audio guide available in English.

To really bring the sagas to life, check out the 75-minute comedy performance of Icelandic Sagas: The Greatest Hits by two leading Icelandic comedians, performed in English.

While in the Icelandic capital, call in to the Settlement Exhibition to enjoy an open excavation brought to life through digital technology.

Described by its creator as an “ode to the sun,” the sculpture conveys the promise of undiscovered territory. Meanwhile, a likeness of Leif Erikson—who may or may not have discovered the Americas—stands outside the striking church Hallgrimskirkja.

Hofsstadir Historic Park: The historic park at Hofsstadir celebrates the presence of a longhouse during the settlement period that would have housed as many as 30 people.

Archaeological remains were discovered quite by chance during construction work in the 1980s. The few hundred items unearthed included a bronze brooch of the style found in Jelling, Denmark, and many metal objects.

The Northmen’s excellent ship building skills aided their discovery of Iceland, while the longhouses kept them safe from Iceland’s harsh winters. Recreations of both are available for visitors to enjoy.

While no Viking ships have been excavated in Iceland, the country is home to a beautifully-crafted replica. Built in 1996, Íslendingur (the Icelander) is an exact replica of the famous Gokstad ship, excavated in Norway in 1882 and now restored and on display at Oslo’s Viking ship museum.

The Icelandic replica is housed at Viking World, a small purpose-built museum near the international airport at Keflavik.

Other Viking Age locations in Iceland

Snorrastofa: Not far from Borgarnes, the home of master storyteller Snorri Sturluson (1206-1241) is a must-see for budding historians. Sturluson was a scholar of Viking law and shaped so much Icelandic culture with his writings.

Stöng Commonwealth Farm: This reconstruction of houses covered by a 1104 eruption is based on the results of an excavation. The findings from this research helped us understand how Viking longhouses were built in the so-called Commonwealth period.

Viking festivals and events in Iceland

An annual Viking festival is held in Hafnarfjörður, just south of Reykjavik.

According to this description, “you will literally see hundreds of Vikings dressed up in Viking style clothes feasting, fighting each other in combat, demonstrating Viking style fighting arts like axe throwing and archery, and selling their wares – ranging from leather goods, swords, silver jewelry, fur to everyday necessities made of bones.”

Are you planning a Vikings in Iceland themed trip to the land of fire and ice? What's on your itinerary?