Known as black gold, oil has driven Norway's economy for fifty years. But the importance of white gold goes back a millennium.

DNA research from the fish bone remains of Viking meals has revealed that Norwegians have been transporting Arctic cod from the north of Norway into mainland Europe for 1,000 years. Funded by the Research Council of Norway and the Leverhulme Trust, the study aimed to shed light on the origins of the well-known cod trade.

Such knowledge of the range and chronology of historic trade is essential for determining the impacts of past human activities on marine environments, and planning for the future. By comparing ancient sequence data to that of modern specimens, the study determined the biological origin of Viking Age and medieval Atlantic cod specimens from excavation sites across northern Europe.

Fish from the trade sites show a mixed ancestry and are statistically differentiated from local fish populations. Viking Age samples from Germany can be traced back to the North Atlantic cod population that has supported the Lofoten fisheries of Norway for centuries.

The study's results resolve a long-standing controversial hypothesis and indicate that the marine resources of the North Atlantic Ocean were used to sustain an international demand for protein as far back as the Viking Age. Prior to this study, there had been no archaeological or historical proof of a European stockfish trade before the 12th century.

Stockfish is air-dried cod that has driven Lofoten's economy for centuries and remains an important industry to this day. Driving around Lofoten it is impossible to miss the large wooden racks on which the fish are dried. Stockfish differs from clipfish, which is salted rather than air-dried. 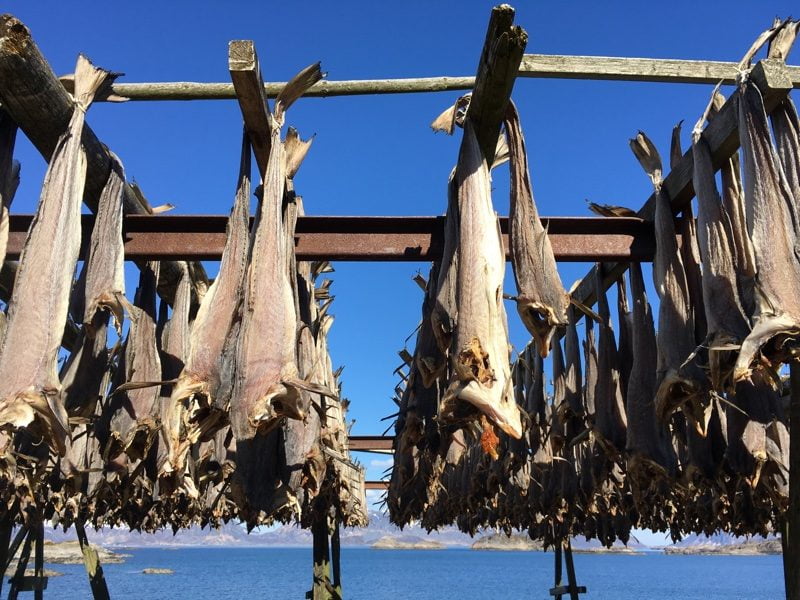 According to an article in Ancient Origins, the research team says the findings support the 9th-century account of the voyages of Ohthere of Hålogaland: a Viking chieftain whose visits from northern Norway to the court of King Alfred in England were recorded. “In the accounts inserted by Alfred’s scribes into the translation of an earlier 5th century text, Ohthere describes sailing from Hålogaland to Haithabu,” says Barrett.

“While no cargo of dried fish is mentioned, this may be because it was simply too mundane a detail,” he says. “The fish-bone DNA evidence is consistent with the Ohthere text, showing that such voyages between northern Norway and mainland Europe were occurring.”

“The Viking world was complex and interconnected. This is a world where a chieftain from north Norway may have shared stockfish with Alfred the Great while a late-antique Latin text was being translated in the background. A world where the town dwellers of a cosmopolitan port in a Baltic fjord may have been provisioned from an Arctic sea hundreds of miles away.”

Work will continue with further fish remains being examined, because the small size of the current study prevents researchers from determining whether the cod was transported for trade or simply used as sustenance for the voyage from Norway.

The cultural importance of the fish in Norway remains to this day. Cod supports a great deal of employment in Lofoten, but its symbolism stretches much farther. Norway's new banknotes feature the fish on the 200 krone note, and the Central Bank made this fishy music video to celebrate their launch.