Skip to content
Home » Explore Norway » The Norwegian Fjords » Aurlandsfjord: One of Norway’s Most Picturesque Fjords 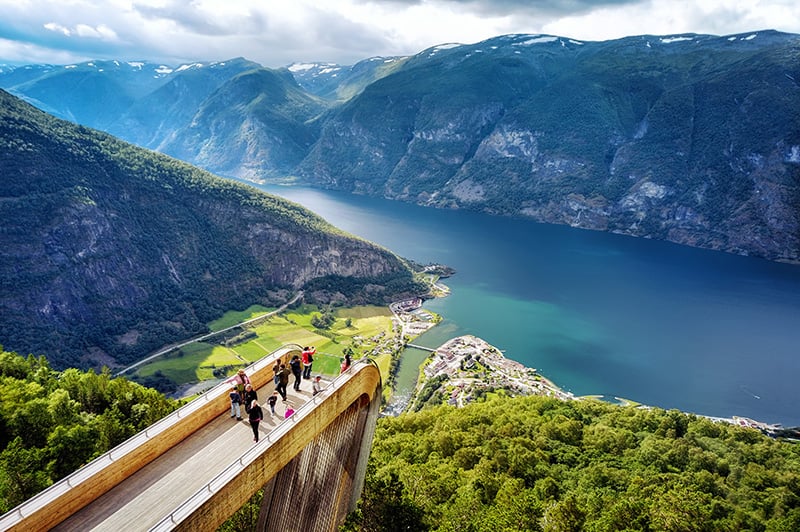 A narrow branch of the Sognefjord, the stunning Aurlandsfjord is one of Norway's most visited and most photographed fjords.

The epic Sognefjord, Norway's longest and deepest, is impossible to miss on a map. It splits the fjord region in two with its 205km-long body of water. Far inland, narrow fingers branch off deep into the mountains, creating some truly spectacular scenery.

One of these, the Aurlandsfjord, is one of Norway's most picturesque spots. The whole region feels like a living museum, so prepare yourself for dramatic landscapes, fjordside villages and hidden highlights.

Why is the Aurlandsfjord so beautiful? The fjord itself is deep and narrow, surrounded by mountains that soar well over 1,500 metres above sea level. While the fjord water reaches a depth of almost 1,000 metres, it's mostly less than 2km wide.

Like all the Norwegian fjords, the Aurlandsfjord was formed by a glacier. The heavy ice carved u-shaped valleys into the mountainside over many thousands of years. When the glaciers retreated, the ocean filled the resulting valley.

Cruise on the Aurlandsfjord

One of the best ways to appreciate the fjord is to get out on the water. Two of Norway's newest, most innovative ferries operate on the fjord between Flåm and Gudvangen. The hybrid-powered Vision of the Fjords and all-electric Future of the Fjords are designed to slash emissions. 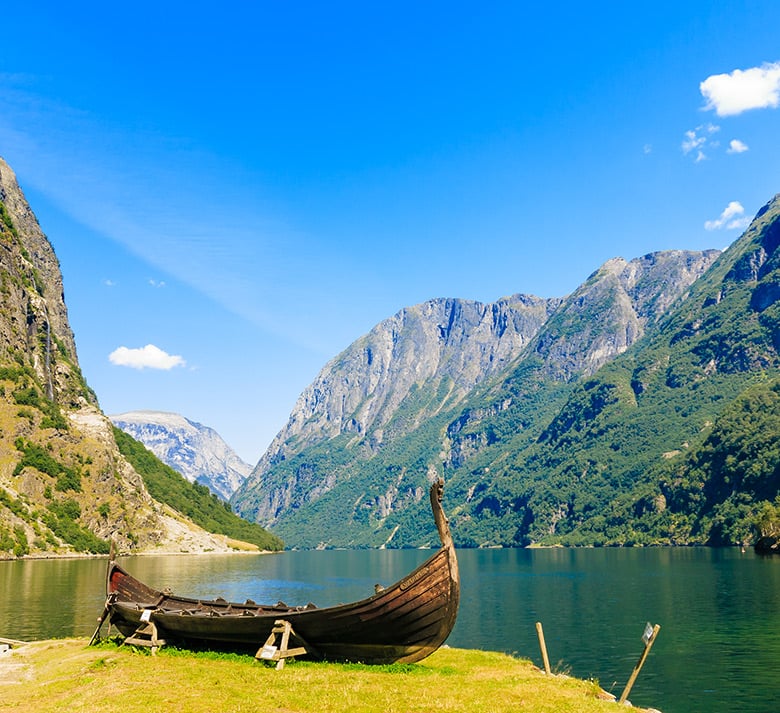 While often crowded, the ferries do enable you to see two of Norway's most spectacular fjords in just one trip. The one-way journey takes around two hours, with several daily departures during the summer.

You can return on the ferry or take the bus if time is short. Another much more private option is to rent a kayak from Flåm and explore the water at your own pace.

The incredible view from Stegastein

Without getting on the water, the best way to appreciate the stunning natural beauty of the Aurlandsfjord is to drive to the Stegastein viewpoint. This viewing platform juts out 30 metres from the mountainside and gives visitors a panoramic view from 650 metres above the fjord.

The architecture optimises the view while respecting the natural landscape. The steel platform is clad in wood to blend as much as possible with the forested mountainside. The view is simply phenomenal. The first time I visited the sky was clear and it felt as if I was looking at a painting, until I spotted a boat coming around the corner!

Stegastein is open year-round, giving the opportunity to see a winter panorama that you don't often see in photographs.

The platform can be reached by car from Aurland, by following the brown signs. Be warned though: the road to Stegastein leads on to the famous Aurlandsfjellet mountain road. This means the narrow, serpentine road can be extremely busy, with parking places a premium during high season. If you go, take plenty of patience!

The Sognefjord’s two southernmost arms (Aurlandsfjord and Nærøyfjord) reach into the heart of Aurland municipality.

Known as Norway’s Grand Canyon, the 40km-long Aurland valley is a paradise for hikers and cyclists, who flock here in the summer from right across the country. Filled with ancient forest trails and long-abandoned farmsteads, the valley’s cultural significance is just as appealing as its natural beauty.

Geiranger may claim otherwise, but I'd say Flåm is Norway's most famous little village. The reason? Not only is it a popular cruise port, it also has the Flåm railway, one of the world's most beautiful railway journeys.

How on earth this railway was ever built in the days before computer-aided engineering (it opened in 1940) will top your list of questions as you trundle down from Myrdal station (on the Oslo to Bergen Line) through the lush Flåm valley. The one-hour journey circles around bridges and through tunnels, descending more than 800 metres at a 55% gradient. 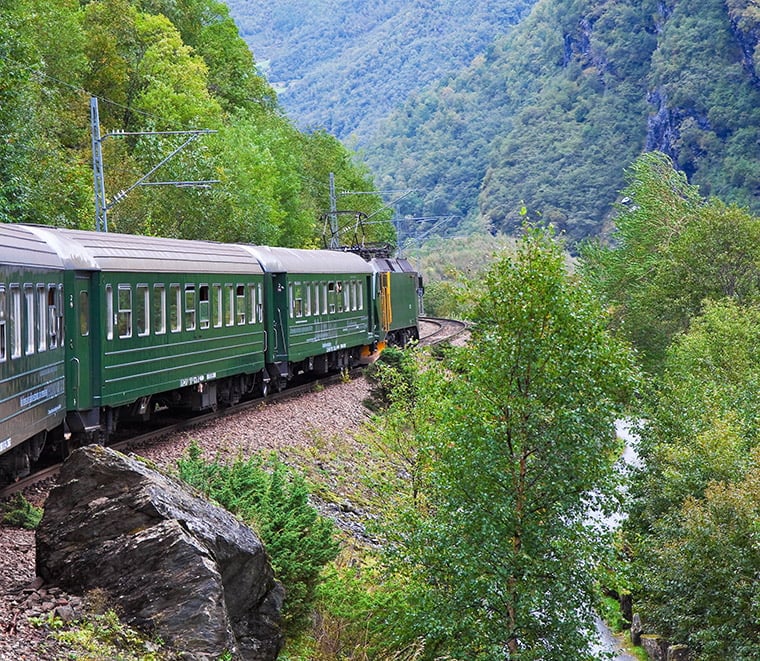 Not only does the railway bring in tourists, it also means the tiny village is easily accessible by public transport from both Oslo and Bergen. Very few fjord villages can claim the same! To top things off, Flåm is an important stop on the Norway in a Nutshell tours.

All this of course means that Flåm is one very little village in the summer months. But that doesn't mean you should skip it. If you’re not on a tight itinerary, Flåm is worthy of an overnight stop. That way, it's much easier to appreciate the area when the hordes of cruise ship visitors are long gone.

The closest place to a town alongside the fjord is Aurlandsvangen, the village you can see down below from the Stegastein viewpoint. It's the administrative centre of the municipality although there are still less than 1,000 people living there.

If Flåm is too busy for you (accommodation is often full), there are a number of places to stay here. Along with the river, there's plenty of waterside walks and views!

Arguably the most beautiful of Aurland’s small villages, Undredal lies 13.5km north of Flåm. The drive takes just 15 minutes. There is a local bus, but it runs rarely. 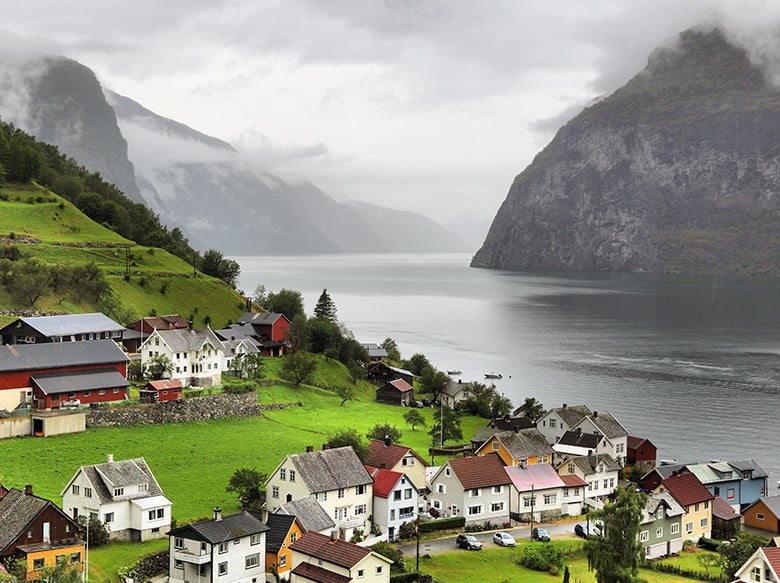 Fun fact: the village's tiny human population is outnumbered by its population of goats. Perhaps then, you won’t be surprised to learn that the village plays host to a Goat’s Cheese Festival every so often!

The Geitostfestivalen program includes such delights as cheese tossing and betting on which square a goat will “do its business” in first. This is rural Norway at its best, folks! Unfortunately, in researching this post it seems the festival hasn't taken place for a few years. Here's hoping it returns!

Undredal is also home to the smallest stave church still in regular use in Scandinavia. Built in 1147 and completely restored in the 18th-century, the tiny church still retains some original features. You can see the medieval bell, baptismal font and a deer-head chandelier on a guided tour.

If you continue on up the mountainside from Stegastein, you end up on Snøvegen, the Snow Road. Opened in 1967 to connect Aurland and Lærdal, the road soars over the mountain to more than 1,300 metres above sea level.

Wondering about the name given the road is closed in the winter? Well, you'll be driving past snow even through large parts of the summer! The drive is well worth the extra time it takes and is a must-do on any itinerary around this part of fjord Norway.

It's one of the 18 designated National Scenic Routes. These are roads that the Norwegian authorities have spent a lot of money improving and building facilities for visitors. Along Aurlandsfjellet, this includes the solar-powered rest area at Flotane and a curving walkway and hidden art exhibit at Vedahaugane.

The world's longest road tunnel opened in the year 2000 to provide a fast year-round alternative to the snow road. It forms part of the E16 highway that links Oslo and Bergen. 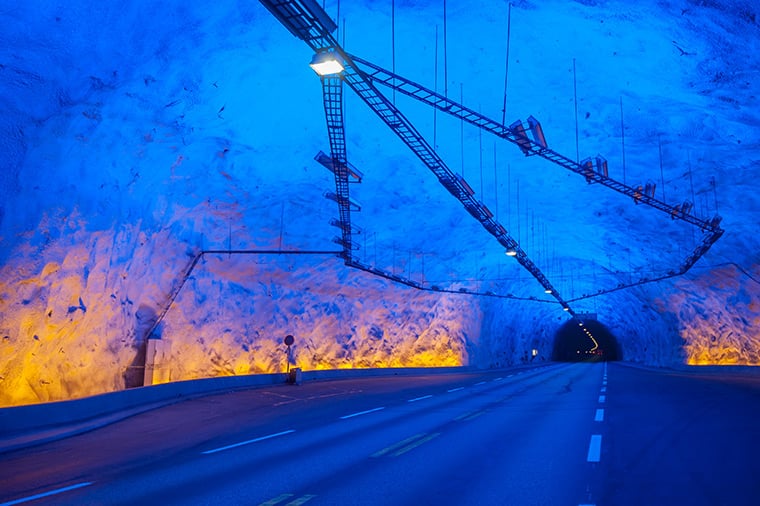 For visitors on their way to the Aurlandsfjord, driving through the tunnel has become something of a tourist attraction in itself. The tunnel's design focuses on reducing driver stress.

The 24.5km-long tunnel is divided into four sections by three large caves. While the tunnel has white light, the caves have blue and yellow lighting to break routine and refresh drivers.

For most people, a trip to this fjord goes hand in hand with a trip to the Nærøyfjord. Passenger ferries from Flåm travel along both fjords on their way to Gudvangen. It's also a short drive for those with their own transport. We'll have an article on the Nærøyfjord coming soon…

1 thought on “Aurlandsfjord: One of Norway’s Most Picturesque Fjords”