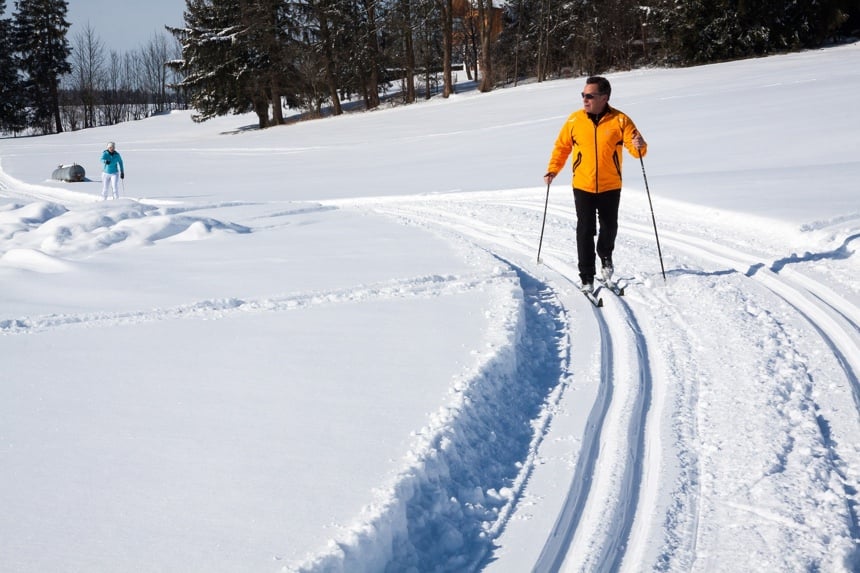 The national pastime of Norway, at least in the winter.

The stereotypes are true; Norwegians are avid (some might say obsessive) cross-country skiers.

I’ve yet to pass a bus or tram stop without spotting at least one or two ski-toting folks waiting for a ride to the end of the transportation lines, where snowy forests beckon.

And in the middle of the day, the train platforms are clogged with throngs of schoolchildren headed to skiskole (ski school) as part of their regular class curriculum.

I do understand their ardor. It’s terrific exercise — cross-country skiers have the highest cardiovascular fitness levels of all sports, as any Scandinavian will tell you. Plus, it’s a great way to enjoy the scenic countryside and avoid cabin fever.

Nothing like zipping along through the snow-laden forests, so quietly that you can sneak up on animals and birds as they forage for supper. Beats the heck out of loud, smelly, bone-jarring snowmobiling by far.

Matthew and I have long been devotees of the sport, having both taken lessons in college. Most winters we manage to squeeze in several trips along Chicago’s lakefront, through Lincoln Park, and sometimes even out to the more remote Waterfall Glen.

But our experience in the flatlands of the Midwest in no way prepared us for our first attempt at cross-country skiing in Norway, Europe’s third most mountainous country.

Our Norwegian colleagues roasted us for even considering tackling the hills here with our waxless skis that we’d bought at a rental store 20 years ago, so we left our antiques at home.

Instead, our Christmas gifts to each other were the purchase of new skis — the “waxable” kind — and all the apparently necessary accoutrements, which we decided to purchase after the holidays in hopes of catching a sale. So off we went on what we thought should be a simple, straightforward mission. Not so much.

Our first stop revealed that hundreds of Norwegians had the same idea. In order to speak to a sales assistant, we had to first claim a “deli ticket.”

Like most Europeans, Norwegians dislike queueing and will cut in line if given a chance, so to avoid brawls in the aisles, everyone from the pharmacist, post office, and taxi stand to the shoe store, bank, and gym dispenses numbered service tickets.

Skis for short adults are hard to find

After dutifully waiting an hour for our number to be called, our patience was rewarded with the news that the store didn’t carry skis or poles for my diminutive stature.

Five-foot-tall adults are rare in a Nordic population, and apparently kids’ skis aren’t stiff enough to bear an adult’s weight.

A detailed online search and six store visits later, we finally snagged the last correctly sized set available in all of Oslo. 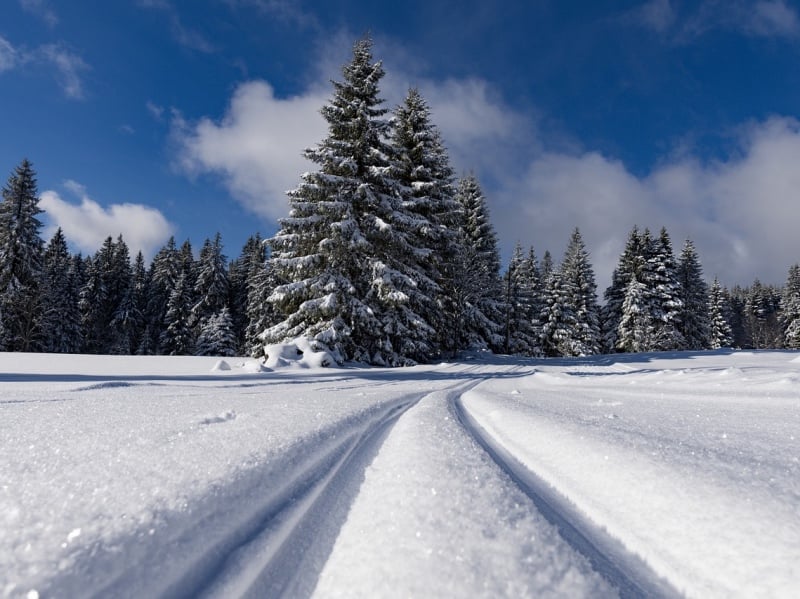 Thus commenced the sales clerk’s dissertation on the highly scientific process of attaching the bindings, which appeared to involve a complex set of algorithms involving height, weight, the type of boot, and far too many other variables for me to comprehend.

When combined with the chemical formulas for applying the correct base layers of waxes, the entire procedure seemed best left to the experts, so we elected to fork over the extra $150 for professional ski preparation.

Acquiring the proper density and layers of woollen long-johns and windproof outerwear in the correct size involved another lecture and lengthy hunt.

The only accessory we opted to bypass was the “ski thermometer” — a device that forecasts the best wax to apply for specific combinations of temperature and types of snow. “How hard could it be?,” we thought. 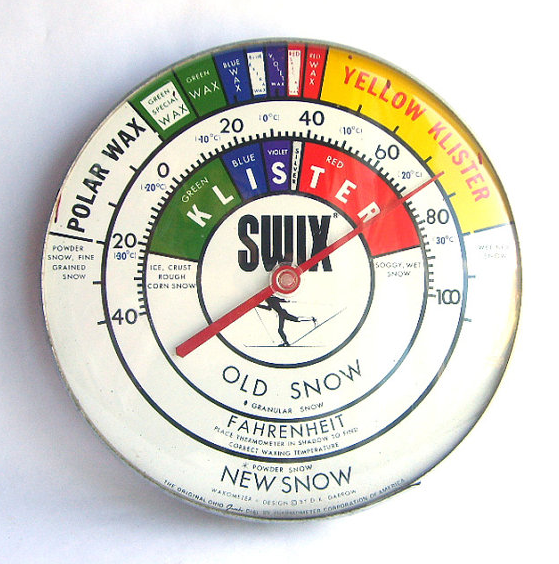 Umm. Yeah. Waxing proved not as easy as it sounded. On our initial foray around the lake at Sognsvann, we spent about an hour attempting to surmount our first hill.

We must’ve looked like a Fred Flintstone cartoon, running in place without ever actually going anywhere. No amount of layering or burnishing the recommended blue wax onto our skis reduced their slipperiness or resulted in our ability to achieve forward motion.

When a troupe of four-year-olds easily chugged past us up the hill, we decided to retreat to flatlands and headed to Vigeland’s Parken.

Gliding over the level terrain proved easier, but when we attempted going downhill, our feet shot out from underneath us like bullets from a gun barrel.

More waxing and burnishing, more bruising falls, and the resulting pounding headaches finally encouraged us to retire for a meal at the Vigeland Cafe.

We decided to give it another try several nights later and headed back to Vigeland’s Parken for practice. This time we’d brought along the red wax and dutifully applied it as prescribed to make our skis stickier.

Bad move. Now it felt like someone had applied crazy glue to our feet. Oh how I longed for my waxless skis back home.

After a half hour of grunting, digging, sweating, and flailing, only to move about 20 feet, I’d had enough. In frustration, I calmly unfastened my bindings, took off my wrist straps, and hurled skis and poles as far away from me as I could manage. 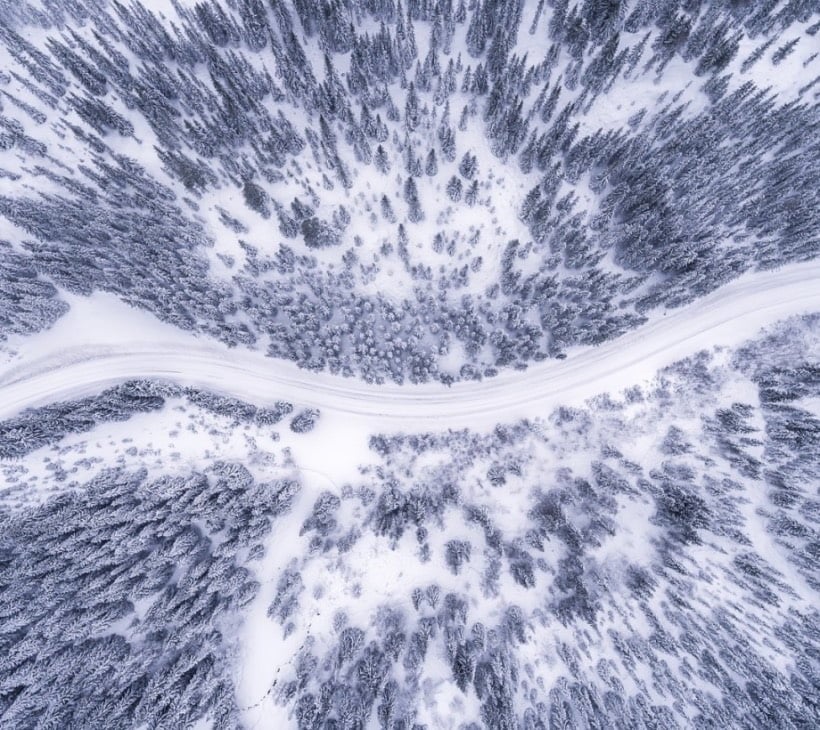 Although it was pretty dark out, apparently there was enough light that a distant Norwegian walking his dog witnessed my tantrum. From the darkness he yelled in broken English: “It’s okay. You okay. Do well. Don’t be quitter.”

All I can say is, he should be thankful he wasn’t within slapping distance or his cheeks would have been red from more than just the cold.

In consideration of diplomatic relations, I avoided giving him the one-fingered salute and simply stomped away, leaving my gear scattered on the snow while he chastised me from afar, shouting, “No, No, Noooooo!”

How do you get a Norwegian to talk?

As Matthew collected my forlorn equipment, the guy approached and said, “You got wrong wax. You need lesson.” No kidding? Matthew assured him that we’d heed his oh-so-helpful advice, and then ran to catch up with me as I waited for the tram.

On board, we were besieged by normally reserved Norwegians who eyed our skis and excitedly peppered us with questions. “How was the snow?” “Good conditions?” “Which type of wax did you use?”

Typical conversation-starters here in Oslo, but now just fuel on the fire of our burning ire and disappointment. We finally elected to get off the train and walk the rest of the way home just to avoid more well-meaning waxing advice, and the ensuing bus-crowd debates that followed.

As the saying goes: “Ask six Norwegians about the best way to wax skis, and you’ll get seven different answers.” Oh well, tomorrow is another snowy day. And apparently attending the ski school is in our near future.

Kimberly Singleton is a storyteller, museum exhibit developer, and now an American expat living in Norway. A southern girl at heart, she's got lots of tales to tell about adapting to her new climate and culture, so feel free to follow along on her adventures at A Newbie in Norway. 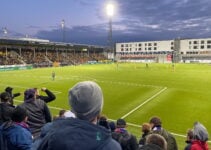 3 thoughts on “Cross-Country Skiing for Beginners”