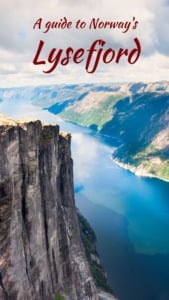 The Lysefjord is one of Norway's most famous fjords, thanks in part to the well-known Preikestolen and Kjerag hikes.

Norway's Lysefjord consistently ranks on lists of the best fjords in Norway, and with good reason. The 42km-long fjord is packed with things to see, from waterfalls and mountain goats to some of the country's most famous hiking trails.

I never get tired of visiting the Norwegian fjords. Last year, I finally made it to the Lysefjord, the last of Norway's ‘major' fjords that I hadn't yet visited.

Although I didn't take any of the hiking opportunities the area is famous for due to time constrains, I was able to enjoy a sightseeing cruise along the fjord.

The passenger vessel leaves daily from downtown Stavanger and is the perfect way to enjoy the fjord if time is tight. So, let's start our introduction of the Lysefjord with that video. It's just 60 seconds long:

Not bad, eh? Now, to find out the details of what you've just seen, read on.

Where is the Lysefjord, Norway?

The Lysefjord is located in the Ryfylke area of Rogaland county in southwestern Norway.

Split between the municipalities of Strand and Sandnes, the fjord lies around 25km east of the city of Stavanger and is considered by a major attraction for the Stavanger region.

The waterway is the farthest south of all the famous Norwegian fjords, but it's the easiest one to reach from Stavanger and much of southern Norway, so still attracts plenty of tourists.

One of the world's most famous hikes was made even more famous after its use in the movie Mission: Impossible – Fallout. The flat clifftop stands 604 metres above the Lysefjord, providing sensational views and a dramatic setting for photographs.

In total, the 8km roundtrip hike will take most people 4-5 hours, including a lengthy break at the clifftop. It's of moderate difficulty, so a reasonable level of fitness is required.

Also overlooking the Lysefjord, the Kjeragbolten hike is also known for its end point—a glacial boulder caught in a mountain crevasse with a 984-metre drop below. The view draws a surprising number of international visitors.

Be prepared though, because the strenuous 7-mile roundtrip hike with an elevation gain of more than 1,800 feet takes up to 8 hours. This is not a good choice for inexperienced hikers.

Other highlights of the Lysefjord

Lysefjord bridge. It's impossible to miss this impressive suspension bridge at the entrance to the fjord. The bridge is the only way to cross the Lysefjord by car. Opened in 1997, the 639-metre-long bridge cost approximately NOK 150 million.

Hengjanefossen: Tumbling down the side of the fjord from a height of 400 metres, Hengjanefossen (the Hengjane waterfall) is a spectacular sight whether it's in full flow or gently flowing over the rocks.

Both sightseeing boats and private yachts often sail right up to the waterfall allowing passengers to taste the pure water.

Flørli: Known for its 4,444 wooden steps from fjord level to mountain, Flørli presents a different kind of challenge to keen hikers. This hamlet can only be reached by boat and its wooden staircase is said to be the world's longest. If you don't fancy the steps, there's other hikes throughout the nature reserve.

Aside from the steps, Flørli is also known for its hydropower history. A small exhibition and cafe (summer opening only) is hosted within the old power hall. A handful of apartments are available to rent along with a guest harbour and kayak rental.

How to get to the Lysefjord

Stavanger is the starting point for the majority of trips to the Lysefjord, whether you plan to hike or simply take a cruise.

By car: You can see down the fjord by crossing the bridge at the entrance of the fjord between Oanes and Forsand. There's a great view of the fjord from the Høllesli viewpoint on the Oanes side of the bridge.

If you're planning the hike to Pulpit Rock, head to the trailhead at Preikestolen mountain lodge. It's about a 30 minute drive from central Stavanger.

You may see some old tourist material referring to a ferry, but that's no longer necessary now a new undersea tunnel has opened.

By bus: Various tour groups run bus trips to Preikestolen throughout the year. Some are bus transport only, others include a guided hike. Pulpit Rock Tours and Go Fjords are good places to start looking.

By boat: Rodne offers the sightseeing cruise that I covered in the video above. Departures are daily during the late spring and summer season, and three times weekly at other times of the year.

The company also offers other boat tours including ones that stop at Fjørli for anyone wanting to make the 4,444-step climb up the mountain.