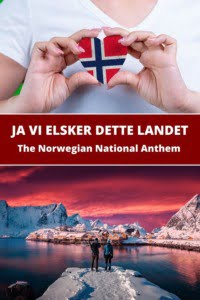 Here is the story behind Norway's national song, including the lyrics in both Norwegian and English.

The Norwegian national anthem—known as nasjonalsangen in Norwegian—is heard by millions of people around the world at the Olympic games or when Norway's national football teams take to the field.

I am of course talking about Ja vi elsker dette landet, often referred to simply as Ja vi elsker.

Within Norway, the song is perhaps most closely associated with the national day celebrations on 17th May.

A new national song—sort of!

Despite these uses, it's only been the official national song of Norway since December 2019. It had been used as the de-facto national anthem for many years, but other songs had also been used.

Here is the fascinating story of the Norwegian national song, Ja vi elsker. We start with the lyrics in both languages. Although there are many verses, only the first and last two are typically sung.

You can dig out your flag of Norway and sing along below! Watch out for the video further down the page.

Translation is a complex business, especially for songs. What follows is a literal translation of the Norwegian words. There have been efforts to create a more poetic version in English over the years, but there is no official translation.

Yes, we love this country
as it rises forth,
rugged, weathered, over the water,
with the thousands of homes,
love, love it and think
of our father and mother
and the saga-night that lays
dreams upon our earth

Norwegian man in house and cabin,
thank your great God!
The country he wanted to protect,
although things looked dark.
All the fights fathers have fought,
and the mothers have wept,
the Lord has quietly eased
so we won our rights.

Yes, we love this country
as it rises forth,
rugged, weathered, above the sea,
with those thousand homes.
And as the fathers' struggle has raised
it from need to victory,
even we, when it is demanded,
for its peace will encamp (for defense).

The history of Norway's national anthem

Ja vi elsker has a long history as a nationalist song and a song of protest. In the last days of the Norway-Sweden union, Swedish socialists sang the song in support of the Norwegian right to leave the union.

During World War II, Norwegian resistance members used the song. It had originally been used by Nazi collaborators as a propaganda song, but the regime eventually banned its use because of its connection to the resistance.

Bjørnstjerne Bjørnson began to write the lyrics of what he intended to be a patriotic song around 1859. An accompanying melody was written by his cousin Rikard Nordraak sometime during the winter of 1863-1864.

The song's first public performance took place on 17 May 1864, to mark the 50th anniversary of the Norwegian constitution.

Over many decades, Ja vi elsker eventually replaced Sønner av Norge (Sons of Norway) as the de-facto national song, but both were used for long periods of time until the early 20th century.

Other national songs in Norway

While Ja vi elsker is commonly heard at sporting events and on the constitution day, there are other national songs used in various situations.

As previously mentioned, Sønner av Norge had the title of national song for many decades. Since 2011, Ole Paus' Mitt lille land has been referred to as a “new national song” and it was used several times in connection with the 2011 terror attacks.

There is also an unofficial Royal anthem known as Kongesangen, or the King's song. It is played alongside Ja vi elsker on 17 May. Brits will instantly recognise it as the melody is the same as the British national anthem, God Save the Queen.