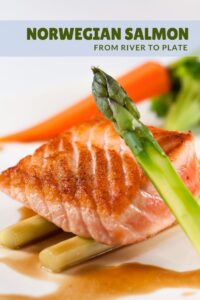 Everything you ever needed to know about one of Norway’s most important foods, Norwegian salmon.

What’s the most important fish in Norway? If you answered cod or herring you’re partly right.

Cod and herring both play a massive role in the economy of Norway. But in terms of exports, one fish dwarfs them all: salmon.

So how does this prized fish make its way from the rivers and seas of Norway onto dinner plates around the globe? Let’s take the plunge and find out!

As you probably already know, the Norse people have been fishing for centuries. Being a maritime nation, with an exceedingly long coastline, gives great opportunities. Fishing and aquaculture play a large role in Norway.

Norway catches around 2% of the world’s fish each year. That may not sound like much, but the population of Norway is around 0.06% of the world. So per capita, that’s a lot of fish! Norwegians do eat a fair amount of that but obviously they can’t eat it all.

Chief among those exports is the Atlantic Salmon. Around 40% of all seafood exported from Norway is salmon. In terms of value, that rises to almost 68%.

How to eat salmon in Norway

Like most fish, salmon is a healthy source of protein that is extremely versatile. It can be eaten in pretty much anyway imaginable, although there are some preferred in Norway.

One of the best ways to eat Norwegian salmon is in fish soup (Fiskesuppe). This is a hearty and creamy staple of Norwegian cuisine, especially in the winter months.

Traditionally, fiskesuppe is made with both salmon and cod with potatoes and other vegetables such as carrots.

A salmon delicacy enjoyed across Scandinavia is gravlaks – salmon cured with dill, salt and sugar. This is easily prepared at home by adding dill, salt and sugar to salmon fillets then weighing them down and refrigerating for a few days, turning regularly.

The traditional accompaniment to gravlaks in Norway is mustard sauce (senneps saus), which is similar to a thick vinaigrette made with mustard, oil, vinegar and dill.

Salmon for breakfast and lunch in Norway

If you want to try an indulgent breakfast, how about scrambled eggs topped with smoked salmon on a slice or two of bread or toast?

For lunch, you can use salmon as pålegg – toppings on open sandwiches – or in a delicious Laks wrap.

Of course, like the rest of the world, Norway is not immune to foreign culinary influences. You’ll find Japanese-style salmon sashimi on menus in Oslo alongside pan-fried, poached and roasted salmon with all manner of European ingredients.

Basically, if you’re enjoying salmon, the Norwegians will approve!

What is Norwegian salmon?

While the term Pacific Salmon applies to a mixture of many different species, Atlantic Salmon consists entirely of a single species – Salmo Salar.

The ‘salmo’ in salmon is thought to come from the Latin salire meaning to leap, after their characteristic leaping action as they swim upstream.

Salmon are what’s known as anadromous fish. That means they spawn in fresh water, migrate to the sea to do most of their growing and then migrate back to fresh water to spawn again. Most salmon have been found to return to the same spot they were born to spawn.

After spawning, the vast majority rapidly lose health and die. Some will survive to spawn again but this is pretty rare. This is mostly down to the fact that, once they adapt to living in saltwater, the fresh water of the rivers is harder to live in.

It usually takes a minimum of four years for salmon to go from hatching to spawning, with roughly half that time spent in fresh water and half at sea.

The journey from river to sea

Freshly hatched salmon are known as Alevin or sack fry and they feed mostly from their yolk sac. These quickly develop into Parr, which have vertical stripes for camouflage. After around 18 months, the Parr lose their stripes and become Smolts, ready to make their way to the sea.

Estimates are that around 10% of hatched fish will survive to become Smolts. These Smolts need to adapt to a life in saltwater, which happens through a variety of hormonal and chemical changes. Then, during their second spring, as the water warms up, they migrate to the sea.

After the first winter at sea, some over-eager young salmon, known as Grilse, start to migrate to the spawning grounds. These are over 95% male and though young they’re capable of competing with the adult males to fertilise the next generation.

Back to the rivers of Norway

Most salmon, however, remain at sea for another year where they feed on other fish and seafood such as krill, and get ready for the long swim upstream to mate. As they mature, they often grow a hump and take on a darker skin colour.

Eventually, they swim back into the rivers and all the way upstream. This migration can cover hundreds of miles, against a current, and through various manmade obstacles such as dams.

Once the migrating salmon reach the spawning grounds of the river, the females create a number of nests called Redds. They deposit their eggs, which are then fertilised by males. Once this is done, the female covers the eggs with gravel to protect them from predators.

Most of the adults now die, though a few will go on to spawn again. The eggs hatch, and thus, the circle of life is complete.

That’s the story in theory anyway. But in terms of Atlantic Salmon, most of it isn’t caught in the wild at all. Instead, it’s farmed in giant tanks moored off the coast.

Salmon farming has been a part of salmon production since the 1970s. It began slowly but soon ramped up and since 1996, production of farmed salmon has exceeded wild-caught salmon every year.

In fact, over 60% of the salmon that we eat is farmed and a large percentage of that is farmed in Norway. Since the mid-80s, Norway has been the world’s single largest producer of farmed salmon.

Norway has developed strong frameworks to regulate the aquaculture industry. These are designed to ensure that modern salmon farms have minimal impact and work sustainably.

However, that doesn’t mean that there aren’t any issues. Many people are concerned about health issues with farmed salmon along with damage to the natural environment.

According to the Norwegian Seafood Council, around 14,000 export-ready Norwegian salmon are inspected each year by the independent National Institute for Nutrition and Seafood (NIFES). “None of these inspections have ever found any residues of prohibited medication or illegal foreign substance,” states the Council.

The use of antibiotics has also been drastically reduced. However, controversy erupted over a 2020 decision to allow Norwegian salmon farmers to export lower-grade fish.

Previously, pollution was a huge problem in aquaculture, Alv Arne Lyse, a fisheries biologist at the Norwegian Association of Hunters and Anglers, told the New York Times. But now “the only threats that are not under control are the genetic impact from escaped fish and sea lice.”

Salmon farming is not perfect, though it has progressed massively since the 1970s. But if we want to eat salmon at the rate we do, it’s unavoidable. A sad fact is that human activity has decimated wild salmon populations to the point of collapse.

Salmon is one of the most tracked and protected species in the world. The earliest recorded reference to salmon conservation efforts date back the late 11th century, the very end of the Viking age. Unfortunately these haven’t exactly been successful.

While you can catch wild salmon at sea, the most obvious place to catch it is in rivers. The best time is to wait until after it has spawned the next generation. Unfortunately, the easiest way in the past was to place nets in estuaries to catch them when returning, before they have a chance to spawn.

This led to many salmon rivers around the world being at risk of losing, or already losing, their salmon. Salmon rivers are now one of the most regulated and reported ecosystems on the planet. Still, conservation efforts have failed to reverse the collapse of salmon rivers.

The reasons for this are varied and not fully understood. It’s likely to be a combination of many factors, including overfishing, pollution and climate change. As ocean temperatures rise this affects many of the species that the hungry salmon like to snack on.

Proportions vary through the year but usually around 85% is fresh whole salmon and 10% is frozen whole salmon with only 5% as fresh or frozen fillets.

The largest market for Norwegian salmon is the EU, where it’s much easier for Norway to export fresh fish. Most of the frozen exports travel to Asia or the Americas. Overall, Norwegian salmon is exported to 140 different countries, providing 14 million meals every day!

Norway’s salmon exports held up pretty well during 2020 as the health crisis circled the globe. While demand for whole fish was down due to restaurant and hospitality closures, more people chose to buy and cook salmon fillets to eat at home.

Some exporting countries suffered but the prestigious quality of Norwegian salmon helped insulate the industry from the worst of the problems.

Do you enjoy Norwegian salmon? Let us know in the comments below.

3 thoughts on “A Guide to Norwegian Salmon”