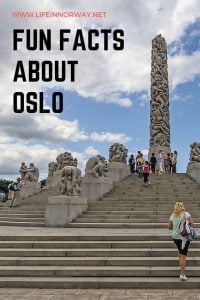 Impress your family and friends with these fun facts about the Norwegian capital city, Oslo.

Like many European cities, Norway's capital has a long history and is changing rapidly. An entire new waterfront region powered by culture is transforming the look and feel of Oslo.

If you’re a fan of pub quizzes or you simply love all things Norwegian, grab a notebook and get ready to learn something new. We've gathered together these fascinating facts about the capital city.

According to official government statistics, the city of Oslo has many people with good self-assessed health, good dental health, and healthy lifestyle habits.

19% of the population is overweight (BMI 27+), which compares favourably to the national average of 28%. The survey also found that Oslo locals drink less sugary soft drinks than average, and the numbers walking at least 30 minutes per day are also better than average.

2. Most of Oslo consists of forest

Oslo might be the capital but that doesn’t mean the Norwegian love of nature and the outdoors doesn’t apply here! Vast untouched forest surrounds the urban core and can be reached on public transport in under half-an-hour.

Known simply as Oslomarka (the Oslo forest), the forest is protected against most forms of development and is home to species such as lynx, wolf, beaver, moose and roe deer.

At the weekends, locals head to the trails for hiking trips during the summer and skiing trips during the winter. The most central and largest area is Nordmarka. For a taste of Nordmarka, take line 1 of the T-Bane to its end station at Frogneresteren and choose your trail!

3. The city used to be called Christiania

One of the great benefits of being a king is naming cities after you. That's what happened after a fire ripped through Oslo in 1624. King Christian IV of Denmark and Norway ordered the city to be rebuilt across the bay, near Akershus Castle, and called the ‘new' Oslo, Christiania.

The name Oslo was kept for the now poor suburb where the original city stood, which today is known as Gamlebyen (the Old Town). Christiania rapidly grew and became the country's biggest city in 1850 as its population overtook that of Bergen. In 1877 the city was renamed Kristiania.

At the turn of the century, senior figures in Norway argued the city holding the name of a former Danish king was inappropriate. After many years of debate, the original name of Oslo was restored in 1925.

4. Oslo was the European Green Capital for 2019

Norway might be one of the world's biggest producers of oil and gas, but its capital city is in the middle of implementing a green revolution. City bosses plan to slash emissions by an ambitious 95 percent by 2030. This despite the fact that Oslo one of Europe's fastest growing cities.

During its year in the spotlight as the European Green Capital, Oslo acted as an ambassador for sustainable urban development, sharing and promoting what's worked with the hope of inspiring other cities to make similar changes.

5. The Nobel Peace Prize is awarded in Oslo

Oslo’s distinctive brown city hall plays host to the award ceremony of the Nobel Peace Prize every autumn. The recipient is selected by the Norwegian Nobel Committee, as per the wishes stated in Alfred Nobel’s will.

With some exceptions, the Prize has been awarded annually since 1903. It is given to those who have “done the most or the best work for fraternity between nations, for the abolition or reduction of standing armies and for the holding and promotion of peace congresses”.

Visitors can learn more about the Prize at the Nobel Peace Center located next to the City Hall. Many former winners are profiled and there is always a temporary exhibition on the current laureate(s).

In 2018, the Prize was awarded to Denis Mukwege and Nadia Murad, for their efforts to end the use of sexual violence as a weapon of war and armed conflict.

6. Trafalgar Square's Christmas tree is a gift from Oslo

Every year since 1947, Oslo has gifted the people of London a Christmas tree to say tusen takk for Britain’s support during World War II.

The tree, usually a 50-60-year-old Norwegian spruce, is selected well in advance from the dense forests that surround the city.

It is felled in November at a ceremony attended by the Lord Mayor of Westminster, the British ambassador to Norway and the Mayor of Oslo. When it arrives in Trafalgar Square, the tree is lit with white lights in traditional Scandinavian style.

From 14-25 February 1952 the eyes of the world fell on Oslo as the city played host to the planet's biggest winter sporting event. All of the events were held within the metropolitan area except for the alpine skiing, which took place at Norefjell.

694 athletes from 30 countries competed in four sports across a total of 22 events. Bislett Stadium was the centrepiece for the Games, while the non-alpine skiing events took place in the surrounding hills. Bandy – best described as field hockey on ice – featured as a demonstration sport.

Norway topped the medal table with 16 medals, of which 7 were gold. The United States of America (11/4) and Finland (9/3) were the closest rivals).

The city had considered bidding again for the 2018 and 2022 editions of the Games. The national Olympic committee chose not to proceed with a joint Oslo-Lillehammer bid for 2018, while political support was withdrawn for the 2022 proposals.

Oslo has a bigger percentage of immigrants and Norwegian-born children with immigrant parents than any other region in Norway.

Around half the population of the Groruddalen district is made up of immigrants and their children, while the figures are similarly high in many of the surrounding areas in eastern Oslo.

9. A city of islands

While the city centre and most residential areas are on the Norwegian mainland, Oslo counts many islands within its city limits.

Several of these can be visited by passenger ferry, which runs around once per hour during the busy summer season. Many locals own or rent small cottages on the islands and spend their July vacation there.

Read more: The islands of Oslo

The islands also offer plenty to interest the tourist. Historical ruins, nature trails, and beaches are among the highlights, while a kiosk on Hovedøya serves up waffles, coffee and ice-cream to keep you sustained.

10. The city’s river has two spellings

Both translate to ‘The Aker river’, for the difference in spelling is to do the spelling of the finite form of the noun river. The difference can also be seen with other place names in Oslo, including for example  majorstuen/majorstua.

11. Its nickname is the Tiger City

Despite the fact that the nearest wild tigers are thousands of miles away, Oslo is known as Tigerstaden, or the Tiger City.

The most agreed-upon reason is that the Norwegian poet Bjørnstjerne Bjørnson described a fight between a horse and a tiger in his 1870 poem ‘Sidste Sang’.

The tiger represented the dangerous city and the horse the safe countryside. City bosses now say Oslo is not dangerous like a tiger, but ‘happening and exciting’.

Every visitor surely knows the tiger statue on Jernbanetorget outside Oslo Central Station. The 4.5-metre bronze statue by Elena Engelsen was a millennium gift to the city from Eiendomsspar.

12. Oslo has more electric cars than any other city

Norway is well-known as an electric car capital. Thanks to a long-term policy of encouraging electric car use, Norway now leads the world in the switch to a greener form of driving.

So it's perhaps no surprise then that the capital city Oslo is the city in the world with the biggest percentage of electric car users. More than 50,000 registered all-electric vehicles are in use on the city's streets.

13. Women do well in business

Gender equality is high on the agenda of many businesses based in Oslo. So much so, that 40% of the leadership positions are occupied by women, the highest percentage ever recorded in Norway.

Norway's parental leave rules encourage gender equality in the workplace. According to the latest figures, 71% of all fathers take full paternity leave.

We'll fiinish up this story with some quick Oslo facts. If you're interested in finding out more about life in Scandianvia, check out our article with top Norway facts.

14. The city is well-educated. Around 60% of Oslo's population has a university degree.

15. Oslo recycles almost half its waste. Around 40% of materials from household waste in Oslo is recycled or reused in new products.

16. Oslo reuses its waste heat. The rest of the waste is converted into energy, which is used to heat many homes, schools and businesses across the capital. High-tech combustion ensures environmentally friendly energy production.

That's all we have time for today. What other fascinating facts about Oslo do you know? If we expand this list in the future, what should we include?

If you've enjoyed this post, why not share it on Pinterest to help others find it too? We've got just the pin for that. Just hit those social sharing buttons.