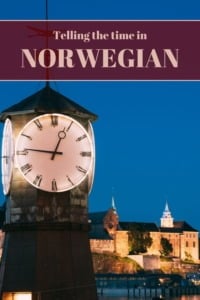 Being able to ask for the time or respond to the question is an important early step in learning Norwegian.

Telling the time is easy right? Well if you’re a native English speaker learning Norwegian, not so much. But worry not! We’ve prepared this little summary for you.

When you see English in parentheses, it’s a literal word-for-word translation, to give you an idea of how odd telling time works in Norwegian.

How much is the clock?

If someone asked you how much “the clock” is, in English, you’d be forgiven to give them an amount for what you think the nearest clock is worth. Or for telling them it’s not for sale, thank you.

If the person asking the question is Norwegian though, it’s likely that they’re just translating directly from the Norwegian “Hvor mye er klokka?” (How much is the clock?), which really means “What time is it?”.

Use the 24-hour clock in Norway

Like most European countries, Norway uses the 24-hour clock. Therefore, the English 3pm becomes 1500 in Norwegian. This doesn’t read as “fifteen hundred hours” like in the American military, but as “femten null null” (fifteen zero zero).

Read more: The Numbers in Norwegian

Alternatively, you can say “klokka femten” (fifteen o’clock). That being said, it’s quite common to say “klokka tre” (three o’clock) when meaning 3 in the afternoon, if the context makes it clear that that’s what you mean.

When writing down the time in Norwegian though, always use the 24-hour clock – like this: “kl.15” for 3pm.

Norwegian grocery stores are an example of this consistent use of the 24-hour clock in written form. They conveniently write their opening hours in big letters on the side of the building.

Quarter past, quarter to…

This is where things start getting weird. So by now you know 3pm can be either “klokka 15” or “klokka 3” when there’s enough context. But what’s half past three? Well… it’s “halv fire” (half four).

Perhaps it has to do with the fact that the 24-hour clock, past 12, will be used in more formal speech. People will then say “femten tretti” (fifteen thirty). Colloquially, people will say “halv fire på ettermiddagen” (half four on afternoon).

In other words, when telling the time, Norwegians start referring to the next hour already at twenty minutes past the previous hour. It's the same situation at 15:25: “fem på halv fire” (five to half four). It’s 15:40? “Ti over halv fire” (ten over half four).

It's enough to make you want to wait an extra five minutes before telling the time, since at 15:45 the madness finally ends with a rather normal “kvart på fire” (quarter to four).

Is there a German in the room?

If you’re German and reading this, none of what I said came as a surprise. Germans tell the time in much the same way as Norwegians.

In fact, in Norwegian class, German students are often rather good because they get so much for “free” (lots of vocabulary has common roots in both languages).

So there you have it. If a Norwegian ever tells you the time is five over half two, you’ll know exactly what they mean… right?

5 thoughts on “What’s the Time? Telling the Time in Norwegian”