Tromsø is a compact city, but don't let that fool you. There's loads to see and do all year round in this northern cultural hotspot.

Although Tromsø is the perfect spot to base yourself during an Arctic adventure or for northern lights hunting, there's so many attractions within the city itself that it makes sense to stay a little longer.

That's because it's the biggest city for hundreds of miles around. As a genuine regional capital, there's plenty here to do, from shopping opportunities to cultural attractions. Here's a selection of the best ways to spend your time in Tromsø:

Tromsø is a very different city in the summer and winter, yet these two attractions are a must-see whatever time of year you choose to visit. Just wrap up warm if that's the winter!

Cable Car: Upgraded in 2016, the city's Fjellheisen cable car transports visitors from the suburb of Tromsdalen to the top of Mount Fløya. From the viewing platform at 421 metres above sea level, you'll get an unbeatable view across the city and surrounding mountains.

Unless the city is bathed in fog you're guaranteed a memorable view at any time of year. But, I'd say the best time to go is late in the day during the summer months when the lift is open until after midnight. This way, you'll get to fully appreciate the impact the midnight sun has on this northern community.

In the wintertime, head up the mountain during the late morning or early afternoon to see the city bathed in blue light. Be warned though, it will be significantly colder and windier up there than down on the city streets, so dress appropriately!

Arctic Cathedral: This famous landmark is not actually a cathedral! The Tromsdalen Parish Church is nevertheless famous for its unique architecture and catchy branding as the Arctic Cathedral.

The tall triangular structure with feature cross and 11 aluminum-coated concrete panels is clearly visible from across the water on Tromsøya island. Thanks to the brave vision of architect Jan Inge Hovig, the church has become far more than a place of worship and is today an internationally recognised design icon of Arctic Norway.

Walk across the bridge, catch a bus or hire a taxi to reach the church. Try to catch a midnight sun concert, held every night at 11.30pm from June to mid-August.

The northern lights in Tromsø

Of course, the biggest draw to the city is without doubt the hope of catching a glimpse of one of nature's wonders. People travel all over the world to see the aurora borealis with Tromsø one of the top destinations. There's good reason for that!

Its location and weather means the city is one of the best places in Scandinavia to see the lights. It is absolutely possible to see the northern lights from the city centre when the lights are strong.

But to increase your chances, get some help from a local. Take a minibus tour with an expert aurora chaser that will whisk you away to wherever the clouds are not.

Read more: How to see the northern lights in Norway

The museums in Tromsø

The three sites of the Tromsø University Museum display the best of northern Norwegian research in a fun and engaging way.

The temporary exhibitions at the Northern Norway Art Museum means there's always something new to see, while the Perspectives Museum provides a window into cultural history, both in the Tromsø area and the wider world.

Read our guide to the best museums in Tromsø for more information on these cultural attractions, along with a whole host of other options.

Other things to do in Tromsø

Built in the 19th century Gothic Revival style with the entrance under the clock tower, the building is Norway’s only wooden cathedral. It's also the northernmost Lutheran cathedral in the world.

The modest interior is lifted by golden chandeliers and a Madonna figure believed to be more than 400 years older than the church itself. Above the altar hangs a copy of the Resurrection painting by Adolph Tidemand.

Polaria – The world's northernmost aquarium with a particular focus on education. Visitors to Polaria are welcomed by films that explain the science behind the northern lights and profile the natural environment of Svalbard. Then, you take the ‘Arctic walk' through the aquarium.

Check the times for seal feeding to see these gorgeous creatures up close. The centre is open every day of the year, so there should always be an opportunity for you to stop by, even if you're just passing through.

Mack Brewery Tour – The Mack Brewery has a proud history and although the beer is now brewed outside Tromsø, the old factory buildings still play host to a tour of the original brewery.

On the one hour tour you’ll learn about the ingredients and the beer brewing process, and of course the strong relationship Mack has with the city. The tour ends in the famous Ølhallen, where you can of course try out the full selection of Mack beers, accompanied by tales from a local!

Telegrafbukta – This southern bay provides pleasant coastal walks and cold water bathing centred on a a small sandy beach. Telegrafbukta is a popular location for locals during the summer.

A large green area with culture and nature signposts, Folkeparken, and the university museum are close by.

What's your favourite thing to do in Tromsø? 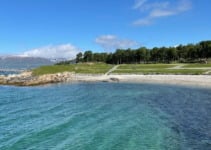 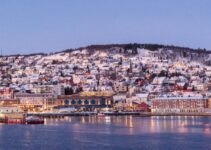 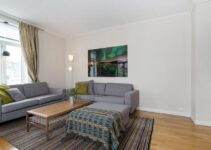 4 thoughts on “Tromsø: Things To Do In Northern Norway’s Biggest City”