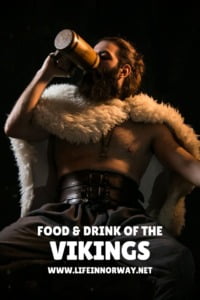 Get the lowdown on what our fearsome Viking ancestors ate and drank to refuel.

It’s a hard life, sailing around the world doing all that pillaging. To be fair, it’s also a pretty hard life staying home to grow crops and raise animals to keep the family going.

Both main aspects of life would have needed a decent amount of energy to keep everyone going. But where did that energy come from?

Let's dig into the Viking history books take a closer look at what food and drink people consumed during the Viking Age.

The labour of food

To start with, it’s worth considering how much work is involved in the production of food and drink. Modern culture makes it easy to forget just how much time and effort goes into the food we eat.

Supermarkets and grocery stores are possibly the biggest time-savers we have invented. Right now, I could leave my house, go to the store, grab a chicken sandwich, a snack and a drink and return home in almost no time at all. The total cost, including my time and the cost of the food would be less than an hour of labour.

It’s a lot different when, if you want to eat a chicken sandwich, you need to make the bread, churn the butter and most importantly rear the chicken. Want some salad on that? Well, you’d better hope you live somewhere with fertile soil and the right climate to grow edible leaves.

The next thing to consider is a logical conclusion that often gets ignored. Life in the Viking Age was tough and simple living would have used a lot of energy. So, the fact that the Vikings chose to ‘waste’ energy on seafaring, raiding and pillaging tells us a lot.

Mostly, this tells us that the Vikings ate well. They were adept at raising food under the harshest of circumstances. They were skilled hunters as well as skilled farmers, foragers and even beekeepers!

The Norse were also highly skilled at both minimising waste and preserving food to eat during the cold winter. Most historians agree that the Vikings ate better than the peasants in much of the rest of Northern Europe and many will have eaten as well as some kings and queens!

What meat and dish did the Vikings eat?

Vikings ate some kind of meat every day. A large percentage of this would have been fish as the Vikings were skilled fishermen after all. There is evidence of them eating pretty much everything the sea has to offer, from herring to whales.

It’s not believed the Vikings hunted whales and caught them at sea. In fact, the Eddas, the written sagas the tell of the period, warn against it. Instead, it’s likely that Vikings would enjoy whales only when they beached and died on shore.

From the land, Norse farmers raised cattle, sheep, goats, pigs and chickens. Apart from the pigs, most of these would have been kept for their milk and eggs. The Vikings only slaughtered and ate them in the winter, to avoid having to keep them fed during the cold months.

Vikings were also skilled hunters and would hunt everything from rabbits to reindeers and perhaps even bears!

A large part of the Viking diet consisted of grain products like bread and porridge. Bread would have been enjoyed with every meal, though it wouldn’t be much like the bread we eat nowadays.

Ground barley with water and probably a little salt for taste would be cooked at eating time, similar to flatbreads, or possibly thin rolls. These kinds of unleavened breads will get very hard once they’ve cooled down, so it wasn’t really possible to prepare large quantities in advance.

Some Vikings may have made leavened breads using a similar process to sourdough, though direct evidence of this is hard to find.

As mentioned above, the Vikings kept animals mostly for their milk, only using them for meat once they stopped producing.

You probably know if you’ve ever accidentally left a carton out in the morning and then returned home after work, without refrigeration milk spoils very quickly. But the Vikings knew how to extend the life of their milk by creating a number of processed products similar to those we use today.

Apart from the obvious milk, which was drunk, one of the main things to do is to make butter. This would usually be done with the cream that, in normal milk, rises to the top. In a modern kitchen you can turn a pot of cream into butter in about 10 minutes. In Viking times, it would have required hand churning for several hours.

Once you’ve made your butter, there’s buttermilk left over. This is a rich and nutritious drink with a slightly sour taste. It needs to be drunk fairly quickly after forming but it’s likely there would be plenty around as making butter would be a very frequent task.

The northmen also made cheeses from their milk. They wouldn’t have been able to mature them to create, say, a sharp cheddar or a pungent blue cheese. Instead, the cheeses would have been high-fat, soft, curd cheeses, similar to things like mozzarella or paneer.

Another dairy product that survives to this day is Skyr, which is still enjoyed by Icelandic people. Skyr is similar to something like a Greek yoghurt but is technically a soft cheese. It’s slightly sour but also slightly sweet. It’s made from skimmed milk so it’s naturally low in fat and high in protein.

Vegetables of the Viking Age

The Vikings wouldn’t have experienced the year-round, buy-anything culture we have today, thanks to modern greenhouse farming techniques. They did, however, eat a fairly wide range of vegetables. From onions and wild garlic, legumes such as peas and beans, the Viking diet isn’t lacking in vitamins.

They would also have eaten root vegetables such as beets as these store very well, often simply left in the ground, to last through the winter months.

Carrots too were a known part of the Viking diet, though they’re unlikely to have encountered our modern orange varieties. In those days, carrots were a range of colours but most often white or purple.

As for green, leafy vegetables such as lettuce, we don’t know whether they would have cultivated these themselves, but we do know that they formed a part of the diet.

More likely they were picked wild, as edible leaves tend to be pretty good at keeping themselves going year after year.

As far as we can tell, the Vikings didn’t cultivate fruit themselves. We do, however, know that they enjoyed a wide range of fruits within their diets. While many of the fruits would have been much more sour or bitter than today, we know the Vikings enjoyed them.

Orchard fruits such as apples and pears would have been fairly common in much of Scandinavia at the time. Cherries and plums would also have been available.

The only nuts that the Vikings are known to have enjoyed from their own surroundings are hazelnuts. They did enjoy walnuts but these came from trading abroad.

For most of human civilisation, salt has been a primary seasoning. It’s available everywhere there’s a coastline by evaporating pans of seawater. We also know the Vikings grew, or at least picked, herbs and spices to season their food.

Anyone who knows Norway will know that dill would definitely have been one of the herbs they grew. It’s also likely that they ate mint, parsley, cress and thyme. They also were probably familiar with horseradish and mustard.

We know that as they Viking Age went on, and the Vikings encountered civilisations from the East, they were avid users of the more exotic spices such as pepper and cinnamon that came along the Silk Road.

Apart from milk and water, which are staple drinks for most civilisations, the Vikings were also fond of beer and mead.

Beer is made by fermenting barley with water to produce an alcoholic drink. They probably would have known about adding hops for flavour too. The beer produced by these methods would have been fairly weak by modern standards but might have been safer to drink than some of the water!

Mead is a kind of wine-like drink made from honey. As there’s plenty of sugar you end up with a stronger drink than beer. Mead has experienced a bit of a resurgence recently in parts of Europe with several Meaderies opening up.

It’s also likely the Vikings would have made wines from other fruits. It wouldn’t have been possible to grow grapes there at the time so ‘proper wine’ would have to be imported from elsewhere in Europe. But we know the Vikings enjoyed real wine when they got their hands on it!

So, putting this all together we can come up with a pretty good idea of Viking mealtimes. They ate two meals per day – a hearty breakfast called dagmall (Day Meal) and a hearty dinner called natmall (yep, you guessed it, Night Meal!).

For dagmall, the adults would probably have helped themselves to some leftover stew, especially the thick layer of animal fat that would have formed on top, with some fresh bread.

This would help them gain energy for the day’s work. The children’s dagmall would likely have been porridge, perhaps sweetened with honey and fruits.

Nattmall was generally a stew that had been simmering for most of the day, with whatever meat and vegetables were available. It was common for the stew – known as skause – to be in a state of constant renewal and last several days.

Each day they’d add new things to the pot to replace what had been taken the day before The almost-constant cooking would break down any tough meat and make sure there were no problems with germs.

Flatbreads with honey and fruit would have provided their sweet treats at the end of the meal. All of this would be washed down with ale, mead and buttermilk.

Feasts were enjoyed around three times per year – likely spring to welcome the end of the long winter, autumn to welcome the harvest and some time in between. The feats would have involved the normal foods, but in greater quantity and variety.

This is when they might have spit-roasted some meat rather than simply stewing it. Feasts would have lasted many days and probably much more alcohol than normal!

It’s fairly easy to keep yourself fed on land when you know what you’re doing and following the traditions that have been handed down through the generations. But how do you make sure you have a decent supply of food on a Viking ship?

It’s important to remember that the majority of the Vikings’ sea missions would actually have been pretty short. Long voyages of many months were exceptionally rare.

But they still need to eat, even if it’s only a few days, so they had the strength to raid and pillage when they arrived!

They would actually take a similar approach to winter. Preserved foods that wouldn’t spoil for long periods of time, such as dried fish, would have been common. Grains can also last a long time as long as they’re stored correctly.

Of course, if it’s the right time of year, there’s the option to catch fresh fish and cook it.

So the Vikings would have been able to enjoy suitable meals to keep their energy levels high on sea as well as land.

1 thought on “Viking Food & Drink: What Did the Vikings Eat?”