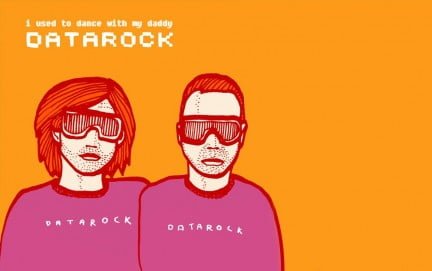 I’ve liked Datarock for some time but had no idea they were Norwegian until I came here. Their raw electronic rock excites my nerve endings and makes me throw shapes in the shower. And on the balcony. And on the T-Bane. And on Ryanair. And on… you get the idea.

Datarock are one of the closest bands I’ve heard to what my mythical group “David and the Keyboards” would sound like. Close, but not the same. I'd have more keyboards, obviously. You will probably have heard at least one Datarock song without realising it, especially if you’re a nerd like me. Their songs have been featured in FIFA 08, FIFA 09, FIFA 10, Need For Speed: ProStreet, Sims 2, an iPod advert, and one of my favourite time-wasting iPhone games Tap Tap Revenge 3.

A rather unique and chilling fact about Datarock – they played on Utøya to the hundreds of teenagers and young adults attending the UAF summer camp less than 24 hours before the tragic shootings of 22 July. They spoke about their feelings to Channel 4 News here (bottom of page).

They are currently touring Norway but stop off in Britain on 3 October at the Garage in Islington, London.