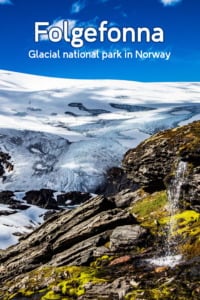 Made up of three separate glacial plateaus, Folgefonna is a remarkable wilderness at the heart of fjord Norway. Lying east of the Hardangerfjord, the icy scenery provides a wonderful contrast to the fjords and lush valleys.

Vast glaciers were responsible for creating the stunning scenery of Fjord Norway over many thousands of years. Norway's Folgefonna helps to visualise exactly how they happened.

Today, there are far fewer glaciers in Norway and most that do exist continue to retreat. In 2005, Folgefonna received national park status to help protect the group of three glaciers and their surroundings.

The largest outflow glaciers, Blomstølskardbreen, Bondhusbreen and Buarbreen provide several viewing spots and opportunities for hiking and even summer skiing.

Folgefonna is about much more than its glaciers though. The surrounding mountains and valleys feature calm lakes and waterfalls fed by the glacial meltwater. As for wildlife, grouse, golden eagles and red deer are among the species that call the park their home.

Folgefonna lies much farther south than you might expect. It's sandwiched on the Folgefonna peninsula between the Hardangerfjord and Sørfjord. To the east is the vast Hardangervidda National Park.

Jondal, a popular base for visitors to the park, is about 96km by car from Bergen, although that includes a ferry crossing over the Hardangerfjord from Tørvikbygd. From Oslo, the drive to Folgefonna is approximately 350km.

Although appearing solid and safe, any glacier is a dangerous place to be. An adventure here should only be attempted with a qualified guide and full safety equipment.

Blue Ice Hikes: Since 1994, Folgefonni Breførarlag have arranged blue ice tours at Folgefonna. You'll be taken to the Juklavass section of the glacier, known for its blue ice. Depending on the wishes of the group, the hike can stick to flat ice or venture into more challenging crevasses.

Although crampons, an ice ace, harness, rope, and mountain boots are all provided, you must remember to bring sunscreen and sunglasses, and be prepared for a five- to six-hour hike covering up to 6km. Even on cloudy days, the reflection from the glacial ice can be dazzling.

Ice-Free Hikes: Pick up a hiking map from any of the local supermarkets in Jondal. The 4.2km Vassenden-Vatnasete hike is a relatively easy way to explore the region’s scenery, including the Vatnasetevatn lake.

The four-hour round-trip is possible May through October, but be sure to take plenty of food and water because cell phone coverage is poor. The hike can be made more demanding by following signs to Dåren or Vatnasete, or combined with a fishing trip.

Bondhusvatnet lake in the shadow of the Bondhusbreen glacier arm is another popular destination. Once much bigger, the glacier was one of the first places visited by the wave of English tourists in the mid-1800s.

For a unique perspective on the glacier, Folgefonni Breførarlag also runs a six-hour guided adventure tour of a glacial lake. Expect about 3km of gentle kayaking and some walking on shore.

Not many of the world’s ski resorts are only open during the summer, so people of all nationalities take advantage of the unique season at the Fonna Glacier Ski Resort.

A daily ski pass costs 405kr, with rental of ski or snowboard equipment available for an extra fee. The 5km cross-country skiing trail offers some of the greatest views in all of Norway, yet it’s flat enough for the inexperienced to enjoy.

Go Fjords operates a summer ski bus from Bergen. The fare includes transport by bus and ferry to the resort, a day pass, ski rental and approximately 4 hours on the slopes.

Opened in 2001, Norway's fourth longest road tunnel runs underneath the Folgefonna glacier. Its total length is just over 11km.

Not only did it slash the time needed for locals to travel from one side of the glacier to the other, it also slashed car journey times from Bergen to Oslo.

Where to stay near Folgefonna

When visiting Folgefonna, it's best to stay overnight in one of the handful of small towns and villages within a short drive of the park. You can of course also wild camp nearby, but be sure to understand the rules that apply.

On the eastern shore of the Hardangerfjord, Jondal is a popular base for visitors to the park. Jondal's 19th-century timber framed church that has an appearance of one much older.

The Akjerhaugen village green features a mound of stones from the Bronze Age, while the Jondal School Museum (open by appointment) reveals what remote school life was like in 1903.

At the heart of Jondal overlooking the harbor, the gleaming Jondal Hotel is impossible to miss. The hotel's café is a popular place to wait for the local Hardangerfjord ferry with a coffee and slice of apple cake.

On the other side of the glaciers, Odda is another popular choice. Best known as a basecamp for the hike to Trolltunga, Odda is also a great location for visiting Folgefonna.

While much of the tourist information on Odda is understandably focused on Trolltunga, the small town is well-located for hikes on the eastern side of the national park, notably Buardalen and Holmaskjer.

Have you been to Folgefonna? What's your favourite thing to do in the area? 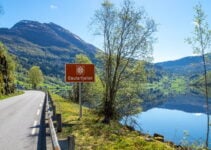