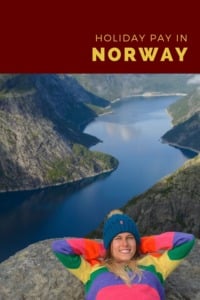 Norway has generous vacation entitlement, but the money side of things can be confusing. Here's how paid holidays in Norway work.

The holiday pay system is without doubt one of the most confusing things for new arrivals in Norway to get their heads around.

Back in the UK, holiday pay was super simple. I was paid monthly, and my annual salary was simply divided into twelve equal monthly payments. That means, I was paid the same amount for a month's work whether I worked that month or took some weeks off for vacation.

That's not how it works in Norway, and it's the cause of much confusion (and misinformation!) among foreign employees.

Over the years, I've had many emails from people claiming their employees are “swindling” them over holiday pay. Of course, while that's always possible, in most cases it was a misunderstanding of the Norwegian system. So, let's set the record straight!

The concept of Norwegian holiday pay

As a general rule, Norwegian companies do not pay an ordinary monthly salary when an employee takes vacation. Instead, holiday pay that was “accrued” during the previous year's employment is paid out.

This is known as “feriepenger” in Norwegian, which literally means “holiday money.”

Unfortunately for new employees, this means you will be paid less during your first year of employment. But that doesn't mean you are not getting holiday pay. Instead you are “accruing” it for the following year.

At the end of your employment, you don't lose the accrued holiday pay that would have been paid to you in the following year. Instead, it is paid out to you directly. So you are not missing out on money, but it is delayed.

How much holiday pay do I get?

First things first, check your employment contract! The legal minimum depends on your vacation allowance. Most Norwegian employers allow their employees either 21 or 25 paid vacation days, in addition to the public holidays.

Your own employment contract or collective agreement may specify different rates, but they cannot be lower than these.

Tax on holiday pay in Norway

Holiday pay is exempt from payroll withholding tax when it is paid out, but it's not technically tax-free. That's because it's part of your annual income on which your tax rates are calculated.

What happens in practice is that you pay slightly more tax in other months to compensate for the holiday pay payment being paid out free of tax.

When is holiday pay paid?

To complicate matters more, the time at which holiday pay is paid out varies. Typically this is up to the employer, so it's worth checking when you begin a new job.

According to the Holidays Act, an employer must pay holiday pay by the last ordinary pay day before the holiday period, or by no later than one week before the employee takes their holiday.

However, it is most common to receive holiday pay during a particular month, most normally June, ahead of the traditional July vacation period.

In this instance, you will be paid normal salary for any holidays you take at other times of the year. In practice, the employer “withholds” regular salary in the month in which the holiday pay is paid, and then pays it when the employee actually takes their holiday.

Let's say you are a foreign immigrant who gets a job in Norway. First up, congratulations! To keep things simple, we'll say you start the job on January 1 with a monthly salary of NOK 30,000 and an allowance of 25 paid vacation days.

During the first year, you will be entitled to 25 vacation days but unfortunately you will not be paid for them. However, you are accruing holiday pay for the following year.

During the second year, you will again be entitled to 25 vacation days. You won't be paid regular salary for these. Instead, you will be paid the holiday pay you accrued in year one.

You will see your regular salary of NOK 30,000 plus the deduction of the salary for the holiday days taken. However, as there are less than 25 days in a typical working month, the deduction will be slightly higher. In this case, NOK 34,615.

This reduces the gross payment in June to NOK 33,385, which is still higher than your regular monthly salary. As an added bonus, there are no payroll deductions payable on this amount.

At the end of the second year, you decide to leave your job. Shortly after you leave, you will receive the accrued holiday pay from your second year on a final payslip. In some public sector environments, the holiday pay is transferred to your next job.

What if I don't work a full year?

In the example above, an employee works a full year to accrue full holiday pay for the following year. Of course, in reality, most people don't start a job on January 1.

If you work only part of a year, then you will accrue holiday pay for that time earned. So if you start a job in July, you will receive “half” holiday pay in the following year.

In this question, I define “normal” as the system I outlined at the beginning of this post, whereby you simply get 12 equal monthly payments regardless of when you take your holiday.

Yes, I agree, it would be so much simpler! However, the answer is in most cases no. Norwegian employers are not permitted to include holiday pay in the regular wage unless this is directly regulated through collective agreements.

The future of the Norwegian holiday pay system

It is possible that the system may change in the future. Some legal experts have said the system violates the EEA agreement, of which Norway is a member.

Article 7 of the Employment Law directive requires member states to ensure that all workers are paid at least four weeks of annual leave. Not paying them in the first year would violate this directive.

In 2019, Denmark was forced by the EU to change their system that had been very similar to the Norwegian one. So, watch this space!