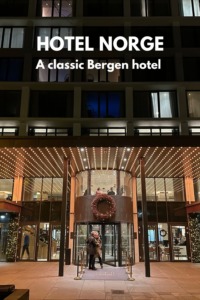 Bergen is a popular tourist destination for all sorts of travellers. As the starting point for the Norwegian coastal cruise, many travellers choose to stay in the city for a day or two before or after their trip.

Others want to explore the region's fjords, or take the famous railway line to Oslo while visiting Bergen.

When visiting Bergen, I usually stay at the Radisson Blu Royal Hotel at the end of Bryggen. This time, I thought I'd try something new. It had to be the historic Hotel Norge.

Following three-quarters of a billion kroner of refurbishment, the hotel is now a top choice for people seeking a touch of luxury on their trip. How would it stack up to other top hotels in Norway such as Trondheim's Britannia Hotel? Let's take a look.

The landmark hotel in downtown Bergen opened its doors in 1885, quickly establishing itself as a luxury destination for local events, domestic visitors and international tourists.

The hotel has been renovated several times over the years. Most recently, the first Scandic did when taking over the hotel was to close it for almost two-years. When the hotel opened again in the summer of 2018, it boasted 411 rooms and an all-new look.

Hotel Norge by Scandic as its now known is the biggest hotel in Bergen and the biggest building in Bergen city centre. It offers a couple of bar and restaurant options, many event spaces, a striking reception area and a lavish spa.

While I could easily find the building—it takes up an entire block in the city centre—the entrance wasn't immediately obvious. In fact, I had to circle almost the entire block!

On reflection, the reason for this is that most modern hotels—especially chains like Scandic—have bright, garish advertising for the chain making it very obvious where the entrance is. Although Hotel Norge is part of Scandic, it retains its understated Hotel Norge branding.

Of course, when I did find the entrance it was immediately obvious, and had I approached the building from that side there wouldn't have been an issue!

When you go through the doors, one of the hotel's bar/restaurants spreads out on either side. To reach the hotel reception, you have to use the escalators/lifts immediately in front of you.

Once you enter the hotel proper, there is a striking welcome.

The reception area doubles as a bar and lounge with an artificial sun that changes colour throughout the day. Because it so often rains in Bergen, that’s a nice touch!

As I'd pre-paid the booking, check-in was swift and easy. To reach the elevators, you pass through the lobby bar and shop. When I checked in the hotel was quiet, but later in the afternoon and evening it was obviously a popular place to be.

My room was on the ninth floor, with the addition of an unexpected balcony.

The room seemed to at some point have been an optional additional lounge room for the suite next door, one of nine in the hotel. There was no connecting door inside the room though so there were no privacy issues at all.

As you might be able to see from the pictures, the bed seemed to be a sofa converted into a bed. Ordinarily this would be uncomfortable, but this was one of the most comfortable beds I’ve slept in for a very long time!

I presume the room has been permanently reconfigured as a regular guest room, because this was a proper mattress.

The bathroom was spacious and clean with a fantastic rain shower. No problems there.

The Wi-Fi worked well despite the room being in the corner of the top floor. The only downside really was the lack of a working desk. The small table provided didn't really do the trick. Other extras included a kettle with tea and coffee, comfy chair and stocked mini-bar.

I didn’t use the balcony because it was around freezing point during my stay, but I did take a quick peek and the view was great.

It would be a great place to enjoy a coffee or beer in the summer, I’m sure.

Breakfast was served in the Nova restaurant on the third floor. When arriving you are greeted with a fantastic display of sweet treats. Somehow I managed to hold my nerve and make it past them and into the main breakfast restaurant.

The breakfast buffet itself was a cut above most Norwegian hotels, while still being the typical Scandinavian breakfast buffet. Pictures speak louder than words here, I think.

I didn’t use the lobby bar or the bar and restaurant down at street level. But the restaurant looked great if a bit pricey and was very busy during the evening. As was the bar, which featured a live DJ.

Elsewhere in the hotel

I didn’t use the spa or pool, so I’ll rely here on the hotel’s description. “In The Pool & Spa you can enjoy pampered treatment at our relaxing and beautiful Artesia Spa or take advantage of our other comfortable spa facilities such as a heated pool, sauna, cold shower, steam bath and a wonderful relaxation area with daybeds.”

Okay so perhaps I should have made time for that! However, it's important to note that on its website, the hotel states that entry to the pool and spa should be booked in advance.

At just over NOK 2,000 per night, this isn't an option for those seeking budget accommodation.

However, the Hotel Nordic by Scandic offers a lot for those who appreciate the finer things in life. If that's you, take a close look. I haven't stayed in every Bergen hotel (far from it!) but I can't imagine there are many better if that's what you're looking for.

If you're not interested in bells and whistles and/or on a tight budget, this isn't the hotel for you. You could consider the Radisson Blu Royal for a high standard at more affordable rates, or many of the budget hotels that have opened up in recent years. 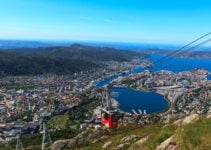