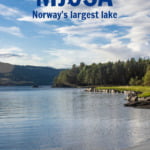 From Olympic venues to shipwrecks deep under the water, lake Mjøsa is full of surprises. Here's our guide to Norway's biggest lake.

An hour or two north of Oslo, the Y-shaped Lake Mjøsa defines much of eastern Norway. Surrounded by important agricultural land, the lake saw the founding of three towns and as such, was once an important transport route.

Today the lake is used for fishing, leisure boat trips and drinking water for some local municipalities.

When gazing out over Mjøsa from the railway, you could be forgiven for thinking the calm water isn't especially deep. In actual fact, its deepest point is farther below sea level than the vast majority of the Skagerrak off Norway's south coast.

Let's get started by looking at some numbers:

Stretching from Minnesund in Eidsvoll all the way up to Lillehammer, Mjøsa covers approximately 369 square kilometres of eastern Norway. The best known towns on the lake's shore are Lillehammer, Hamar and Gjøvik.

Both the Oslo to Trondheim railway and the main E6 highway skirt the eastern edge of the lake for much of its length.

Thanks to its status as host of the 1994 Winter Olympics, Lillehammer is the best-known town on Mjøsa. The Norwegian Olympic Museum and Maihaugen open-air museum are among the attractions.

Just a few kilometres south of Hamar, Atlungstad Brenneri is an historic aquavit distillery. The facility has distilled its famous Norwegian cask-aged aquavit since 1855. Tours are available of the site by knowledgable guides that explain the history, production process, people and passion behind Atlungstad.

History of the Mjøsa region

During the Viking Age, it's known that the lake served as an important trade route, although precise details are scarce. There are signs of human settlement around Lillehammer dating back to the Iron Age.

Between the years 500 and 1000, the Åker farm was an important power centre in Norway. It was just a few kilometres away from present-day Hamar. The centre was moved to present-day Hamar sometime before 1152, possibly at the instruction of Harald Hardråde.

Thomas Robert Malthus traveled through Norway in 1799 and his diaries from the trip includes a description of Mjøsa. He wrote that Mjøsa appears as both lake and river because the shores are defined by mountains and where the valley becomes wider the water fills the space.

Prior to the development of the railways, the water was a key transport link between the farms and towns that grew up around its shoreline. The new railway line from Christiania (Oslo) to Eidsvoll was completed in 1851.

This helped the towns of Mjøsa grow, as cargo such as timber and agricultural goods could be transported by rail to Eidsvoll and then onto Lillehammer and other towns by steamship along the lake.

I've touched on some of the important settlements that grew up around the river already, but now let's look at some of them in more detail.

Lillehammer: Host of the 1994 Winter Olympics, Lillehammer is known throughout the world. The legacy of the games remains, with the town and its surroundings a popular winter sports resort.

Hamar: The town is home to two venues that hosted figure skating and speed skating events at the 1994 Winter Olympics. It's an important town on the Norwegian railway system, as the Røros Line branches off the main Oslo to Trondheim line here. The Norwegian Railway Museum is located here.

Brumunddal: A small, compact town surrounded by farmland, Brumunddal is known for its wood hotel. It's the tallest timber building in Scandinavia and possibly even the world.

Gjøvik: By far the biggest settlement on the western side of the lake, Gjøvik grew on the success of its glassworks. The town hosted 16 ice hockey matches for the 1994 Olympics in the world's largest cavern hall for public use.

Kapp: About 14km south of Gjøvik, Kapp is a stop for the Skibladner tourist steamship. Kapp is the largest area in Østre Toten, one of Norway's most productive agricultural regions.

Eidsvoll: Linked by a short stretch of the river Vorma to Minnesund on the lake's shoreline, Eidsvoll played an important role on the trade route from southern Norway to the towns on the Mjøsa. The nearby Eidsvoll Manor House was the host of the signing of the Constitution of Norway.

Helgøya: The only island in Mjøsa has been linked to Nes on the mainland since 1957 by a road bridge. The 18.3-square-kilometre island is packed with farms and is home to a 19th-century white, wooden church.

Are you a keen cyclist? Then a bike ride around the lake could be for you. Such a tour offers beautiful landscapes with important cultural heritage, a handful of beaches and intriguing towns and villages.

The first leg of the recommended route goes from Lillehammer to Brumunddal, followed by a day trip to Nes and Helgøya through abundant cornfields and orchards.

Continue further along the shoreline to Hamar, where you can catch a ride on the paddle steamer Skibladner across to Kapp. Spend the night in Gjøvik before cycling back to Lillehammer.

The trip outlined above follows parts of the marked cycle route ‘Mjøstråkk' that circles the entire lake. There are many opportunities to stop and take detours along the route.

A few years ago, the Norwegian Defence Research Establishment conducted two ROV inspections of areas of the lake where large amounts of munitions had been dumped. Such munitions posted health risks, as the lake is a source of drinking water.

The project to map the 363-square-kilometre lake bed using high-resolution sonar technology discovered a fascinating shipwreck. In remarkable condition with unique stem posts and overlapped planks, the vessel is estimated to date between the 1300s and 1800s.

“Wooden shipwrecks can be very well preserved in freshwater, since they lack the organisms that usually eat wood that are found, for instance, in the ocean,” said Øyvind Ødegård, a senior researcher in marine archaeology at NTNU to CNN.

“I assume that if we are going to find intact Iron Age or medieval vehicles in Norway, then Mjøsa would be the place to look, since it’s big enough to have had its own distinct maritime history with a lot of seafaring and trade.”

As mentioned earlier, the lake served as an important trade route although details are scarce. “No matter what the age, any find will help us to understand better how the development in shipbuilding tradition was like in an inland lake, as compared to the Nordic countries,” said Ødegård.

Have you spent any time on or around Mjøsa? What's your favourite spot? Let us know in the comments below.