How to see some of the best scenery Norway has to offer from the comfort of the country's railway network.

To some, the train is simply a mode of transport, a method of getting from A to B. But in Norway, some of the trains take you through lush green valleys or over remote mountain plateaus that are otherwise near impossible to see.

If you're without a car, the train is your next best option to get up close and personal with nature. Throw in to the mix the fact that fares are surprisingly low when booked in advance, and you'll quickly see why rail travel in Norway is a tourist attraction in itself.

Why take the train?

Norwegians often bemoan the national rail network. It’s more than 4,000km long, with a total of 775 tunnels and more than 3,000 bridges. But because of the landscape, it’s difficult to get anywhere quickly. This means that travelling by airplane is the preferred option for many commuters and business travellers.

But tourists have different priorities of course! Here are three reasons why you should consider seeing Norway by train.

Depending on your wishes, including train travel into your itinerary can be the perfect way to combine sightseeing with transport.

However, bear in mind that many of the most scenic routes aren’t scenic the entire way. Even the world-famous Oslo to Bergen line has many, many kilometres of tunnels I’m not suggesting you don’t take such a tip, of course! But it’s important to set expectations.

Travelling by rail is one of the best travel bargains in Norway. It’s not always cheap, but it’s nearly always the best value option all things considered.

While booking in advance secures the cheapest rates, you should also consider a monthly pass if you are planning on making the train your primary way of zipping around the country. For European residents, a One Country Pass from Interrail offers terrific value.

The Swedish trend of flygskam hasn’t taken off in Norway just yet. Haven’t heard of flygskam? It roughly translates to flying shame or plane shame. It’s a word that describes the increasing trend someone feels by choosing to fly over more greener options.

A lesser known word also common in Sweden is tågskryt, which means train bragging. That shouldn’t need much explanation!

How the Norwegian railways are organised

In 2015 the centre-right coalition government of Norway announced a shake-up of the national railways. While this sounds boring, it's good to know how things have changed. You'll see many references in guidebooks and the like to things that no longer apply.

From 2017, several new entities were established. The Norwegian Railway Directorate has overall responsibility for tenders and coordination. The National Rail Administration was also reincorporated as Bane NOR. The state-owned company has responsibility for planning, development, administration, operation and maintenance of the network.

NSB, the name formerly associated with the state railway, has changed name to Vy. It's also had some responsibility transferred to other companies, so NSB/Vy is now a commercial train operator that must compete against others for the right to run the trains.

It's already lost a couple of tenders, including two to the Swedish national operator, SJ. Its new Norwegian subsidiary SJ Nord now runs the Oslo to Trondheim and Trondheim to Bodø lines, among others.

However, ticketing will remain centralised, so much of the complexity of the system should remain hidden from passengers. At present, you can buy all tickets for all lines via the Vy website, or from manned railway stations. The one exception is the Oslo Airport Express train.

Norway train map: Where you can go on the rails

If you come from a country with a substantial rail network such as the UK, the Norwegian network can seem limited. While that’s true, you can get to a lot of places on the train. You just might have to take a long way around!

For example, travelling between Trondheim and Bergen by train is absolutely possible. You just have to go all the way to Oslo on the way!

Here is a map that helps you visualise the network to get a ‘bigger picture' idea of whether your plans are possible. This map looks a lot more complicated than it actually is! So once you've taken a look, keep reading for a look at some of Norway's most popular regional train routes.

Now, let’s take a look at the most popular long distance railway lines in Norway. This is not an exhaustive list and there are other commuter lines, especially in the Oslo region. However, here are some of the most interesting for tourists:

Oslo to Bergen: One of the world's most famous railway journeys, and with very good reason. The Bergen Line links Norway's two biggest cities across the imposing Hardangervidda plateau.

At 1,237 metres above sea level, it is northern Europe's highest mainline railway journey. As you might expect at some altitude, the scenery is dramatic and ever-changing. Read Maggie's trip report.

Myrdal to Flåm: A real feat of engineering, the Flåm railway winds it way from 863 metres above sea level through a lush green valley down to the Aurlandfjord, a branch of the Sognefjord.

Yet despite the 20 tunnels and one bridge, the Flåm line was built before the time of computers. Don't miss the museum at the station in Flåm to hear the story and see photographs from the line's construction. To connect with the Flåm Railway, take the Bergen Line to Myrdal. Here's our guide to the Flåm Railway, or you can read a more personal tale.

Oslo to Trondheim: While not as dramatic as the Bergen Line, the Oslo to Trondheim railway is an interesting alternative. You soar over the Dovre mountains and can enjoy some of Norway's mountainous landscape and nature up close. Musk ox can occasionally be seen from the train.

You can also travel between the two cities on a different line by changing at Hamar. The main reason for doing this is that the Hamar to Trondheim train calls at Røros.

Trondheim to Bodø: At almost ten hours, the Nordland line between Trondheim and Bodø is Norway's longest continuous train service. The 729km route crosses 293 bridges, ploughs through 154 tunnels and crosses the Arctic circle on its epic journey northwards.

The government is considering plans to extend the railway even farther northward to link Bodø and Tromsø. These plans have been debated for decades, but are at the time of writing back on the agenda. Watch this space!

The Rauma line is one of Norway's “hidden gems” on the railway network. Connecting to the Dovre line at Dombås, the 114km-long line follows the Rauma valley terminating in Åndalsnes. It's a beautiful part of the country and is a must-see if you're a keen hiker.

Landmarks along the route include the Romsdal Alps and Trollveggen mountain face. The line also crosses the Kylling Bridge, part of a horseshoe curve as the line navigates the steep hills of the valley.

Oslo to Stavanger: The Sørlandet line is not as popular with tourists as the line spends most of its journey in forest rather than following the coastline. However, it is a useful means of getting around as it links three of Norway's principal cities: Oslo, Stavanger and Kristiansand.

From 2019, service has been run by Go Ahead. As with other long-distance lines, there is one night train available in both directions on most days of the week.

The odd one out in the list! Regular regional and commuter trains connect Oslo Airport with the city. However, there is also the more expensive and slightly quicker flytoget. The Airport Express Train is run by an independent company and passengers buy tickets directly for them. Read our guide to Oslo Airport to find out more about your options.

Are you wondering what to expect on a Norwegian train? Most of the longer-distance trains, called region trains, are comfortable if not overly modern. Most do come with an in-seat power outlet, although it's often one outlet for each pair of two seats.

There is free Wi-Fi access available. However, signal strength varies and will be non-existent for some of the journey due to the remote, mountainous nature of many of the lines. It is generally suitable for downloading emails, checking timetables and reading the news, but definitely not for streaming video.

The regional trains have a cafe with a seating area. There is a simple menu offering at least one hot meal, and a selection of sandwiches, drinks and snacks. Don't expect fantastic quality, but the price offers reasonable value. You can also buy beer.

Long distance trains have a premium class available for an additional fee when booking. The fee used to be fixed, but now it varies.

Although this is far from first class standard, you do get an upgraded seat, guaranteed power sockets, and free hot drinks from a vending machine. If you're travelling the entire length of a regional train, the extra fee is worth it for the more comfortable seat alone.

Most trains also have a family carriage with play area, and a quiet carriage where talking on phones etc is not allowed.

That said, you're getting transport and a night's accommodation rolled into one fee. I haven't ever taken a sleeping compartment, so I can't tell you what they're like, but I don't think you should expect a quality night of sleep.

If you book a standard seat on a night train, you can again expect some disturbance. Not every passenger will be planning to sleep! However, on these trains every seat comes with an eye mask, ear plugs and a blanket for the journey. An eye mask is an essential item especially when travelling in the summer months.

How to buy tickets for Norway trains

The easiest way to buy train tickets in Norway is online using the Vy website. There is a full English translation available. Tickets can be ordered and either printed out, saved to an app on your smartphone, or collected at the station. You can also buy tickets using the app, although this is probably more relevant for Norwegian residents.

The golden rule for the regional trains is to buy your tickets in advance!

For example, a single ticket for the Oslo to Bergen railway bought on the day of travel currently costs 964 kroner. If you buy your ticket at least 24 hours in advance, you qualify for minipris fares. These can plunge as low as 299kr, although around 400-500kr is more likely. Even buying just a day in advance will usually save you a couple of hundred kroner.

There are only a limited number of the cheapest fares. They do sell out quickly in the high season from June-August, so the earlier you book, the better your chances of a low fare. Note that these fares are non-refundable.

Did you enjoy this guide to using the Norwegian train network? Let us know what's missing! If you found it useful, why not share it on Pinterest so others can benefit from it too? We've got just the pin for that. Just hit that Pinterest button! 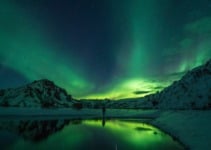 9 thoughts on “Norway By Train: A Complete Guide to Rail Travel”