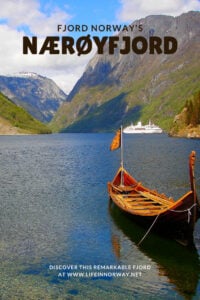 Archetypal steep sides, slender waterfalls, picture-postcard villages and a popular tourist ferry mean the Nærøyfjord is one of Norway's most visited fjords.

Not only is the Nærøyfjord one of Norway's most visually stunning fjords, it's also one of the most visited. As a UNESCO World Heritage site and a mainstay of the popular ‘Norway in a Nutshell' tourist route, the Nærøyfjord is a real star of fjord Norway.

The narrow waterway with steep sides ticks every box for tourists. At its narrowest, the fjord is just 250 metres wide, while the surrounding mountains reach more than 1,400 metres high.

Norwegian geologist and writer Amund Helland wrote: “High and mighty mountains surround these fjords and valleys, which are among the most remarkable areas in Sogn.”

Convinced yet? If you want to visit one of Norway's best fjords, here's everything you need to know.

Where is Norway's Nærøyfjord?

The Nærøyfjord is an arm of the Aurlandsfjord, which is itself an arm of the much bigger Sognefjord. Both arms are located in Aurland municipality at the heart of the fjord Norway region.

The river Nærøydalselvi flows down the Nærøydalen valley into the fjord, which stretches from Gudvangen to Mount Beitelen and the Aurlandsfjord.

Just 18km (11 mikes) long, the fjord's depth varies from 10 to 500 meters. It's 100km inland and as with all fjords this far inland, the water is calm. This makes kayaking a great way to experience the area.

In addition to Gudvangen, along the shoreline are the small settlements Bakka, Tufte, Styvi and Dyrdal. The latter two have no road connections and are only inhabited outside the winter time. Although it hasn't happened in a while, the fjord has been known to freeze during especially cold winters.

Sights along the fjord

Together with the Geirangerfjord a little to the north, the Nærøyfjord became an official UNESCO World Heritage site in 2005. Rare for a World Heritage site, the two fjords make the list for both their cultural and natural value.

“The two fjords, among the world’s longest and deepest, are considered as archetypical fjord landscapes and among the most scenically outstanding anywhere. Their exceptional natural beauty is derived from their narrow and steep-sided crystalline rock walls” – UNESCO

Ghosts of the pre-industrial agricultural culture that once dominated Norway linger. It's impossible not to think of the original farmers who settled here and worked incredibly hard to cultivate the landslide-prone land under the mountains.

As you can probably guess, the fjord in itself is one big experience. But as for specific sights, there are a few tiny villages and beautiful waterfalls to watch out for. This is also a great location for birdwatching in Norway.

Sagfossen / Lægdafossen: Of all the fjord's waterfalls, this waterfall with two names is the most eye-catching. A vertical drop of 125m is part of the total 575m-long waterfall. Tour boats often sail close enough so that you can feel the droplets on your face.

Tufte / Tuftefossen: The tiny farm village Tufte is well-known thanks to its slender waterfall backdrop. Tufte can be reached by road from Gudvangen.

Bakka & Bakka church: On that same road closer to Gudvangen is Bakka. This village is easy to spot from the boat thanks to the gleaming white wood of Bakka church. It may look small, but the church can seat up to 200 people.

For a sense of how isolated Norway's rural communities used to be, consider hiking along the old postal route. To do so, you'll need to ask the ferry to drop you at Bleiklindi. But don't forget to arrange a pickup at Styvi by calling ahead in advance.

At Bleiklindi, you'll find the beginning of a popular hiking trail along the old royal postal route, Den kongelige postvegen. While this 6km hike runs between Bleiklindi and Styvi, the full  17th-century route ran all the way from Oslo to Bergen.

The village of Gudvangen

With just one campsite, Gudvangen isn’t set up for long stays. Most tourists pass straight through, boarding a coach or ferry. But that's a shame and it's worth lingering for an hour or so to soak up the atmosphere. The last time I visited, there were a handful of family-run stores including a small homemade knitwear and trinket-filled house.

If you're on a fjord Norway road trip, Gudvangen is a notable stopping point on the journey to Voss and Bergen. As the hairpin bends of the E16 climb the ever more green valley, be sure to stop at the Stalheimskleiva viewpoint for a memorable photograph back down toward Gudvangen.

Allow around 2.5 hours to complete the 147-kilometer (91.3-mile) drive from Gudvangen to Bergen. Voss is an obvious point for a break.

The Viking Village at Gudvangen

If you have the time, the Njardarheimr Viking Village is worth stopping by for a couple of hours. This recreated Viking settlement is perfect for those looking to learn more about the Viking era, or simply have some fun with archery and other traditional games.

Enjoy a soup or stew with bread at the food court before moving on. There are many events held throughout the year so check in advance if you are visiting outside the regular season to see if you’re in luck.

Do check their website for opening hours and any temporary closures if you're planning a special trip to avoid disappointment.

How to see the Nærøyfjord

The most popular way to experience Aurland’s highlights is through the classic one-day Norway in a Nutshell train-bus-ferry combination tour from Oslo or Bergen. The tour’s popularity is its downside, as from June to August the buses, ferries, and small villages along the route are overrun with people.

My recommendation is to make your own way there, by car or by train. From May to September, a popular sightseeing cruise transports passengers from Flåm to Gudvangen via the Aurlandsfjord and Nærøyfjord.

The futuristic hybrid Vision of the Fjords and all-electric Future of the Fjords eco-ferries ply the route, an early step toward making the fjords entirely electric in the coming years.

The difference it makes to the noise is remarkable, with the screeches of the birds circling overhead much more audible. That's dependent on how noisy your fellow tourists are, of course!

If planning your own itinerary and/or staying overnight in Flåm, taking one of the earlier or later ferries can help to miss the Nutshell rush.

The one-way journey takes just under two hours. To return, choose the ferry again or take the short minute shuttle bus back to Flåm. This cuts the round-trip duration from Flåm down to around three hours.

Other options include a RIB boat “fjord safari” that gives a more intimate experience. I'm not providing specific details here because these things can change frequently and at short notice. If you're interested in a fjord tour, it's best to contact Flåm tourist information, who can also book all tours.

1 thought on “Nærøyfjord: A Dramatic Fjord in Western Norway”