Following a full survey of Edøy island, archaeologists have announced the discovery of a second Viking boat grave.

News of the Edøya ship discovery made headlines around the world last autumn. Now archaeologists have finished reviewing all the georadar data from the resulting survey.

The data shows the imprint of another Viking boat, in addition to the remains of two houses and five overgrown mounds. The find could improve our understanding of Norway's Viking history.

Never heard of Edøya? That's not a big surprise, for the island is just 7.5km2 (2.9 square miles) in size. Yet this tiny island in Møre og Romsdal county was an important centre of power in the Viking Age.

Along its larger island neighbours Smøla, Ertvågsøya and Tustna, Edøya is now sure to come under the spotlight like never before.

“In the process of interpreting the data, we discovered a clear circular and reflective structure. In the middle of that structure we see a 7.3 metre long and approximately 1 meter wide anomaly. “We interpret it as a boat tomb under a round stone cairn.”

Although the grave is considerably smaller than the first find, it can't be described as small. NIKU's Knut Paasche, who was a guest on the Life in Norway Show recently, explains:

“If a 7.3 metre long anomaly represents the bottom of a boat and the upper board aisles have rotted away, the original boat will have been a few metres longer. It's likely to have needed four pairs of oars.”

Burial mounds and remains of houses

In the report, archaeologists revealed more of Edøya's secrets. North of the boat grave, another round anomaly appears albeit without a boat structure. The team believes this fragmented anomaly is where a burial mound has been ploughed over.

Around 50 metres further north, the georadar data revealed traces of two more graves, measuring 11 and 19 metres in diameter. Two more anomalies to the north-west of the boat grave appear to be remains of houses.

“We see a curved, rectangular structure of approximately 12 by 5.9 metres. In the central part of the house is a large reflective anomaly, which may be the remains of a floor or hearth,” said Gabler. There are other round anomalies nearby that together form a rectangular structure.

County conservator Bjørn Ringstad believes the houses and boat graves could well come from different time periods: “The houses that have been traced may well be from the older Iron Age, circa 300-600 AD. The tombs may be from the younger Iron Age, circa 600-900 AD. The findings nevertheless show that there was a close connection between the residences and the burial ground at Edøy.”

Similar to a previous find in Møre og Romsdal

According to the experts, the boat is likely more than 1,000 years old. “This is probably a somewhat similar boat tomb from the Viking Age, from the 900s, to the one found in Surnadal in 1994,” said Ringstad. 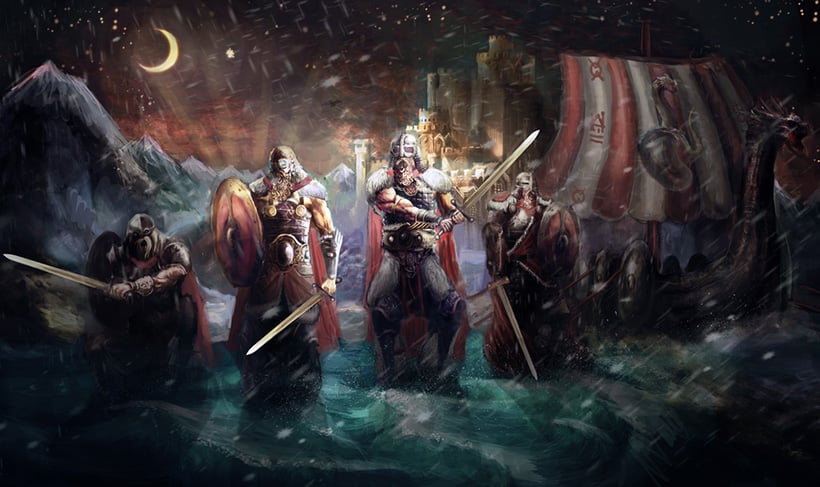 The grave was excavated the following year by archaeologists from NTNU in Trondheim and Møre og Romsdal county. Within the boat's imprint, the team found fine weaponry including swords, spears and arrows. The new find at Edøya is about the same size.

The discoveries strengthen the belief that Edøya was a centre of power during the Viking Age.

“Ship burial finds still belong to the rarities of Norwegian archaeology. In general, ship burials are reserved for the top layer in society, so the ship grave at Edøy is a clear proof of a local power elite,” added Paasche. He believes the house remains are not large enough to have been part of the chieftain's seat, but could still represent parts of a larger farm structure.

The full report (only available in Norwegian) is available for download from NIKU here. Based on the results of the project, further archaeological investigations in and around the region are likely.