Skip to content
Home » Explore Norway » Svalbard » Svalbard Weather: What to Expect in the High Arctic 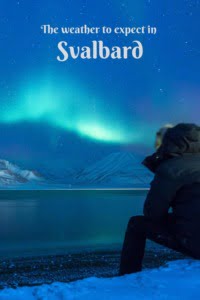 The climate is changing fast in Norway's Arctic archipelago. If you're planning a trip north, here's what to expect of the weather in Svalbard.

Are you planning a trip to Svalbard? One of the most common questions I get about the unique destination is about the weather. That's no surprise, given that photos often show ice and snow-covered landscapes.

If you've never been to the Arctic archipelago, you could be forgiven for thinking the weather in Svalbard is always freezing cold. That's not the case, and even less so these days with the weather changing so much year-to-year.

The changing climate in Svalbard

Places at high northern latitudes like Greenland and Svalbard are known to be among the places in the world that are already experiencing the impact of climate change.

According to a Norwegian Centre for Climate Services 2019 report, average annual temperatures have risen by 4°C since 1970. The change is winter is even more stark, with an increase of more than 7°C.

Since 1979, Arctic sea ice has declined by nearly 12 percent per decade, with the most pronounced winter reduction in the Svalbard and Barents Sea area.

All of this has spelled trouble for Longyearbyen, the main town on Svalbard. Rainfall has increased, causing more avalanches. Unstable permafrost also risks buildings.

Polar bear sightings in built-up areas have also increased, as the melting sea ice sends the mighty mammals in search of food elsewhere.

What all of these means to the average tourist is that previous average temperature statistics give a much less certain indication of what to expect now. That being said, we can look at recent years for some basic guidance, at least.

The archipelago is the meeting place for cold polar air from the north and mild, wet sea air from the south. Perhaps more so than anywhere else in Norway, when you visit Svalbard plays the biggest role in dictating the likely weather.

Another thing to bear in mind is where you visit. In this article we'll focus on Longyearbyen. But if you are on a cruise along the coastline or trekking in the interior, things could be very different.

Weather in Svalbard: season by season

Generally speaking, winters are cold and dark, spring is bright and snowy, while summers are bright and dry. Let's look at each season in a bit more detail.

The summer in Svalbard is best known for the midnight sun. With the sun hitting high in the sky all day long, this has an inevitable impact on the weather. But it also has an impact on the body. You're likely to struggle to feel tired and sleep for the first few days.

There will probably be no snow on the ground in and around Longyearbyen, but snowfall is possible on mountains hikes. Rainfall is not as rare as it used to be, but it's still not common during the summer.

July is usually the warmest month. Temperatures tend to hover between 3°C and 8°C, although temperature records have been broken in recent years.

A temperature well in excess of 20°C was recorded in Longyearbyen during the summer of 2020. In summer 2022, Longyearbyen experienced several days above 10°C with a high of 18.2°C on 16 July.

If you head out on a boat trip, expect to feel much colder because of the wind. The same is true on hikes. You should pack woollen base layers, hats, mittens and a warm coat regardless of the forecast!

As August transitions into September, Svalbard enters the short “golden autumn”. A wonderful time to be on the archipelago, the autumn light tints the tundra in red and orange colours before the snow arrives.

As the midnight sun ends, temperatures to begin to cool but still typically hover above freezing. Rainfall is more frequent, and September is usually one of the wettest months of the year. However, it's usually too early for snow.

From November to January, darkness descends over Longyearbyen and the lack of sun has a big impact on the weather. Average temperatures plunge to between -5°C and -17°C but with the wind and lack of sunlight, it can feel much colder.

Expect snow showers and snow beginning to settle in and around the town throughout the winter in Svalbard.

Despite the darkness and the low temperatures, it's actually the strong winds that can be most difficult to deal with at this time of year. Dress appropriately!

From mid-February to April, the sun gradually returns to Longyearbyen. But it doesn't necessarily bring warmer temperatures! This season, often referred to as the “white winter,” can actually be the coldest time of the year.

Expect average temperatures around -15°C and significant amounts of snow on the ground. On milder days rainfall is possible and that's when the risk of avalanches is high. At this time of year, daily avalanche forecasts are prepared.

Despite the snow and cold temperatures, you should bring sun cream and sunglasses. The glare off the snow can be truly dazzling.

Later in the spring in May, temperatures quickly return to freezing or above. This is when the coastal ice has broken up, allowing more toursit ships the opportunity to venture north from Longyearbyen.

Have you ever been to Svalbard? How was the weather for you? 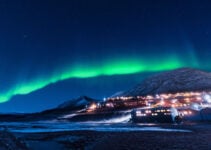