It doesn't have the picturesque narrow and steep sides of the west Norwegian fjords. But nevertheless, the Oslofjord offers plenty of things to see and do.

Norway's Oslofjord region is easily the country's most populous area. Around two million people live around the fjord, including the population of Oslo itself.

Furthermore, more than 40% of the country's population lives less than a 45 minute drive from the fjord. The Oslofjord has Norway's busiest boat traffic, yet there are plenty of spots along the coastline where you can't see or hear another person.

An introduction to the Oslofjord

The Oslofjord is not a fjord in the geological sense of the world. The word fjord is used in Norwegian to describe a wider range of waterways than how it's typically used in English.

The fjord—an inlet of the Skagerrak sea—is vast, stretching south from the city of Oslo to the Torbjørnskjær and Færder lighthouses. The fjord is divided in two by the narrow Drøbak sound. The area to the north is known as the inner Oslofjord, and to the south the Outer Oslofjord.

The inner part of the fjord is much narrower, with forested sides. It's also known for the collection of islands just outside Oslo. The best known—Hovedøya—has monastery ruins, beaches, nature trails and playgrounds. Let's dive into this part in more detail… 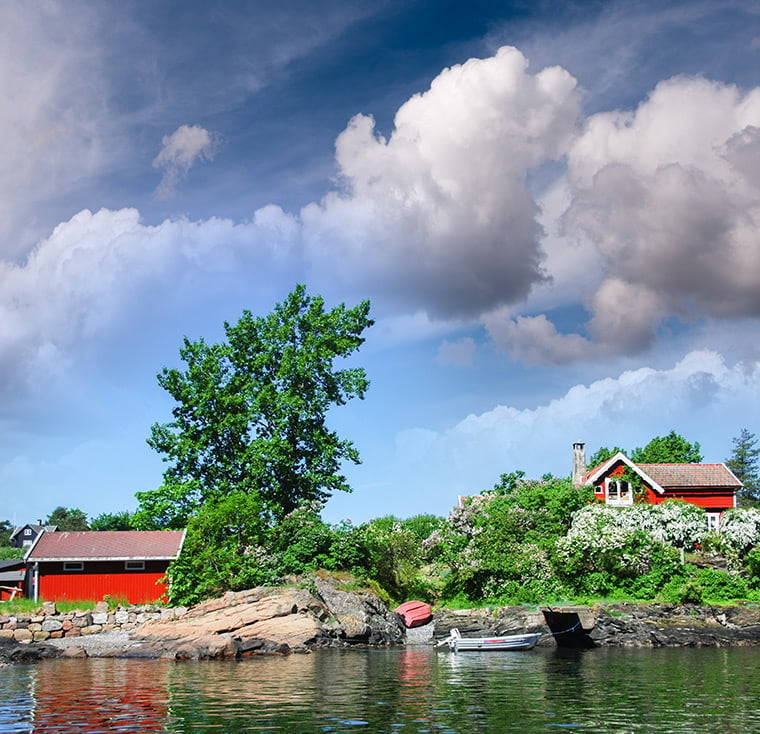 When someone in Oslo talks of the fjord, they are talking about the inner Oslofjord. The waterway comes to life in the summer months with cruise ships, ferries from Denmark, passenger ferries to the islands and personal boats. Throw in the opportunities for kayaking, canoeing, diving, fishing and swimming, and you have one busy place.

This part of the fjord is best known for the small group of islands close to the city centre of Oslo. These recreational islands are connected to the city by small passenger ferries that form part of Oslo's public transport network. This means they are super cheap and easy to visit!

The boats leave from one of the piers in front of the City Hall, close to Aker Brygge. Departures during the summer are fairly frequent making it possible to island hop. Take care if visiting outside the summer though, as departures are much more limited.

It takes just five minutes by ferry to reach Hovedøya, the closest island to the city. On sunny days, the beaches are hugely popular with locals looking to catch some rays.

But if sun worshipping isn't your thing, there's plenty of other points of interest on Hovedøya too. That's especially true if you have an interest in history. The most notable sight is the ruins of Hovedøya Abbey, a 12th-century Cistercian monastery built by English monks.

The abbey stood for almost 400 years, until political turmoil during the succession to the throne led to the end of the monastery when the abbot chose the wrong side. The abbey was subsequently closed and burned down. There's a nice little cafe next to the ruins that serves pizza, beer, ice-cream, pølser, etc during the summer months.

Elsewhere on the island you'll find open spaces for games and nature trails through the dense forest. Hidden away in the forest are a couple of former military installations.

The island hosted two cannon batteries and was used as an arsenal for Akershus fortress on the mainland. Close to the ferry port, a beautiful timber-framed building has been lovingly restored. The ground floor is now open to the public as a gallery / studio space.

Other islands of the Oslofjord

I've written before about the other islands so I won't go into too much detail here. Each island has its own distinctive character, from the beaches and camping of Langøyene to the residential vibe of Lindøya. Yet, all the islands share a familiar look.

That’s because cabins built on certain islands have to adhere to a strict colour scheme of red, blue, green or yellow. When you add in the green of the grass and trees and the blue of the ocean, it’s a truly colourful experience.

The residential peninsular Nesodden points towards Oslo and is a popular place to live. Commuting to work in the city by ferry is attractive option for many! Ferries leave and arrive from Aker Brygge throughout the day. About 17,500 people live here. The charming Nesodden Church was built in the 12th-century.

Towns of the Oslofjord

Several small villages and towns line the fjord on its journey down to the Skagerak. There's far too many to talk about them all, so here's just a few of my favourites:

With a rich maritime heritage, enjoyable coastal walks and views across the narrowest part of the Oslofjord, Drøbak is one of my personal favourites.

On an island just outside the town, Oscarsborg Fortress has many stories to tell. It dates back to the 1600s but is perhaps most famous for the Battle of Drøbak Sound in April 1940. That's when the batteries sank the German warship Blücher in the early days of World War II.

As one of Scandinavia's oldest cities, historic Tønsberg has many tales to tell. Founded by the Vikings, the city went on to become of Norway’s most important cities in the Middle Ages.

If you're a history buff, it might be worth planning a trip here. Viking burial mounds and church ruins are big draws, especially during the pleasant dummer weather. Tønsberg is also considered to be the starting point of the Vestfold Viking Trail. This is a series of ancient settlements and burial mounds dotted along the Oslofjord. The Oseberg ship now on display in Oslo's Viking Ship Museum was discovered not far from Tønsberg.

Back in the city, Tønsberg Brygge has been the focal point of the city for more than a thousand years. Previously a bustling centre of regional trade, the wharf of today dates to the early 19th century and houses bars and restaurants.

If you want to make the most of the waterside location, check out the coastal path of Ilene Nature Reserve. Enjoy the sea breeze and spot a diverse range of birds from the hides and picnic spots along the 7.5km family-friendly trail. You can explore the coastal paths of Nøtterøy island, immediately south of the city.

A small port city known for its gardens, canal and waterfront location, Horten is another of the Oslofjord's pleasant summer towns. Many visitors head to Midgard Viking Centre at Borre on the town's edge. Here you'll find the Borre burial mounds and a reconstructed longhouse, among other attractions.

Between Tønsberg and Horten, Åsgårdstrand is a lovely Norwegian summer town. Famous as an artists' city, Åsgårdstrand attracted Edvard Munch to spend many of his summers here. Other than the summer weather, Munch's house is one of the main attractions here. 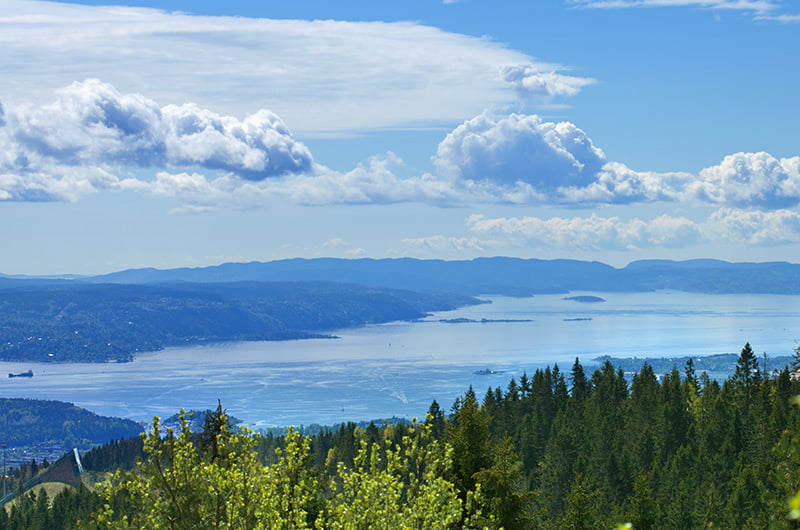 Across the water from Tønsberg, Horten and Åsgårdstrand, Moss stands on a site that's been home to settlements for more than 7,000 years. Today the town is known as an industrial centre with paper mills and metalworks factories.

The town was known internationally because of its airport, Moss Airport Rygge. A major base for budget airline Ryanair, the airport closed to civilian traffic in 2016 when Ryanair withdrew. The airline blamed the introduction of a new Norwegian passenger tax for their withdrawal.

How to explore the Oslofjord

While it's possible to get some of the Oslofjord's towns by train or bus, a car is best to make the most of an extended stay in the region. Train and bus routes do run down both the western and eastern edge of the fjord, but don't serve every town. If you're heading to somewhere specific, the train or bus can be a good choice.

With a car, you can cross the fjord on the busy Horten-Moss crossing. With millions of passengers every year, the 30-minute journey is Norway's busiest ferry crossing. It's also possible to cross the fjord further north using the Oslofjord tunnel near Drøbak. The 7.3km tunnel is part of the E134 highway.

During the summer, a fast passenger ferry runs from Aker Brygge in Oslo to Drøbak. While it's slower than the bus, it's a much more comfortable experience. To find out more about your transport options, check out Ruter and Vy. 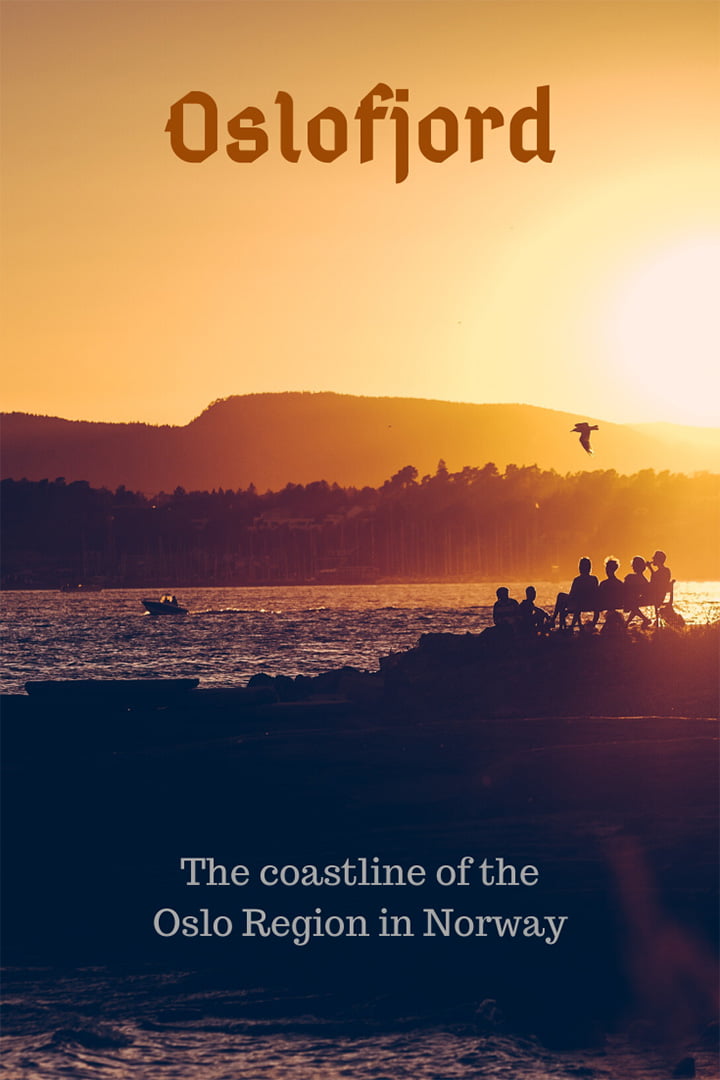 4 thoughts on “Discover The Oslofjord”