With trains, buses, trams and a metro system, Oslo residents and visitors are spoilt for choice with options for getting around the city.

Oslo city centre is compact and much of it can be navigated on foot. But the suburbs spread out for many miles, and some tourist attractions are outside the central area.

Thankfully, there is a very good integrated public transport system. Trains, light rail, trams, buses and ferries are on hand to move you around the city with ease.

Whether you’re in town on a city break or you’ve just relocated, you’ll likely want information about public transport in Oslo. Get comfy, because that’s exactly what I’m going to cover today. 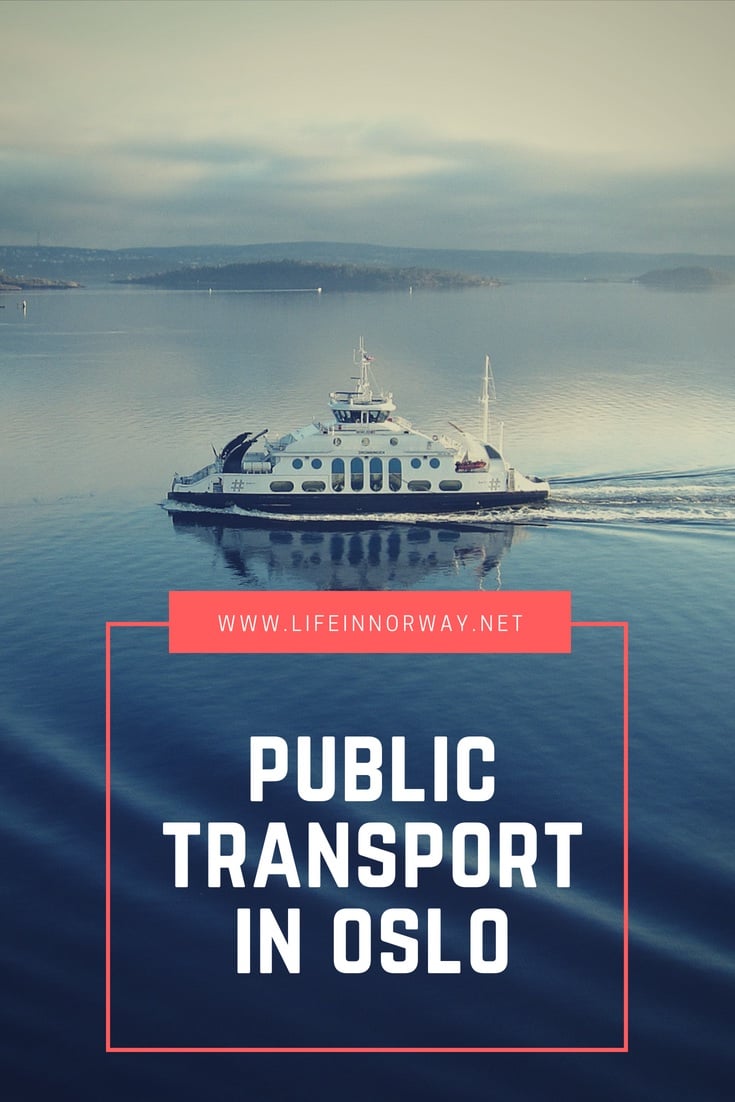 Public transport in Oslo and Akershus is coordinated by Ruter AS. Individual operators are contracted to run the individual services. But it’s Ruter that has responsibility for planning, pricing, coordinating and managing the system as a whole.

Options for getting around Oslo

I often get asked “which option is best” by visitors to Oslo. They want to know if the train, light rail, tram or bus is the best option for them.

The answer, of course, is that it depends! There is no one right answer. The best public transport option for you depends on where you’re staying and where you’re going.

This is of course even more true for new residents of Oslo. The best option for you is likely to be the one that’s most convenient from your home address. For those visiting the city, here are some of the major sights accessible via various means of transport: 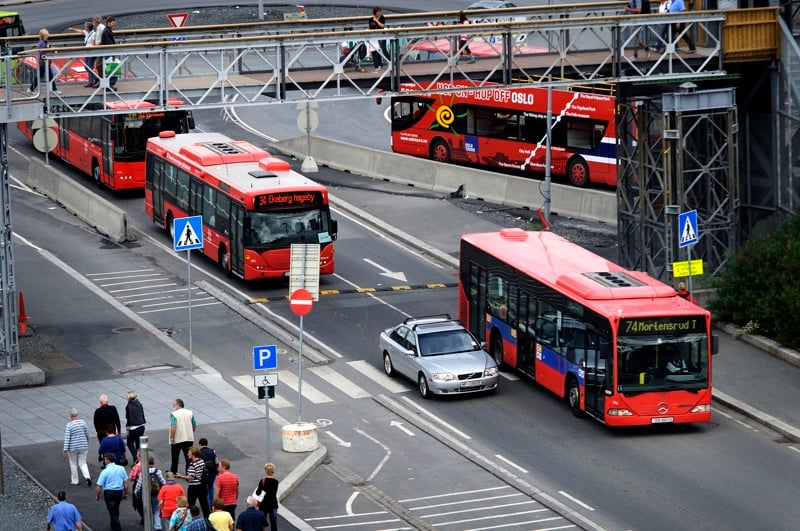 Where to buy public transport tickets in Oslo

Whichever ticket you go for, you'll need to get a Ruter electronic card, which is available from any staffed station, plus many kiosks such as Narvesen and Deli de Luca.

On the card you can store a period ticket (e.g. 30-day ticket) or credit, which can be used to pay for single tickets. You can read more about the electronic ticket here. Alternatively, you can use the mobile app to purchase and store your ticket.

To validate the ticket, you must touch the card to the readers situated at the train/metro stations or on board the bus/tram.

If you have a period pass, the expiry date will display on the screen, otherwise the credit will be deducted from the stored value. It's a simple, user-friendly system that just works.

Several commuter lines exist in and around Oslo including a popular one between Oslo and Drammen, via Skøyen, Lysaker and Asker. Be warned, these trains get very busy in rush-hour! You can check timetables over at Vy.

They are of limited use for travellers, though. The one exception is the local line that runs between Oslo and the main airport. It's a much cheaper option than the Airport Express Train and takes only a few minutes more. Check out our Oslo Airport guide to learn more about these options.

Light rail or metro systems are always popular with travellers the world over as they tend to be one of the more efficient ways to get around an urban area. In Oslo the system is known as the T-Bane. It's a very popular with both commuters and leisure travellers.

There are a variety of lines covering the city, numbered 1 to 5. All lines converge through the city centre in a shared tunnel. That means that the stations at Majorstuen, Nationaltheatret, Stortinget, Jernbanetorget, Grønland and Tøyen stations, you can pick up any T-Bane line.

Line 1 is popular with tourists as the primary means of getting to Holmenkollen ski jump and the national ski arena. It's also used to reach the hiking and skiing trails of Nordmarka by way of the final station, Frognerseteren.

A new central tunnel is planned to relieve congestion on the network, as the current tunnel limits capacity. However, any changes will be years away yet. One confirmed extension useful for business commuters is the new line from Majorstuen to Fornebu. The latest network map can be downloaded here.

The tram (trikk in Norwegian) is an old, slow system of moving around Oslo. Yet it provides a critical link to many residential parts of the city. There are also many destinations that visitors can reach on the tram. They include Vigeland Sculpture Park, Bislett Stadion, Aker Brygge and Grünerløkka.

A new fleet of trams is on its way along with several important line extensions which should revitalise the network. The new trams are much quieter and more efficient. Importantly for the elderly or those with mobility issues, they will also have doors down at pavement level. Many of the old trams had narrow stairs to board.

You will find two types of public bus in Oslo. The red ones are local buses, criss-crossing Oslo and providing links to all areas not served by one of the other forms of transport. The green buses are regional buses. They travel much further afield and generally start and end at Oslo bus terminal.

City bus line 30 to Bygdøy is the most popular for tourists. This service takes visitors to many of Oslo's best museums, including the Viking ship museum and Kon-Tiki.

An important distinction to note is on the green regional buses you must enter at the front and show your ticket. On the red local buses you can enter using any door. You only need to scan your card if you need to validate it or use it to pay for a single journey.

Your ticket is valid on a limited number of passenger ferries that serve the small islands of the Oslofjord. They all fall within zone 1. That includes Hovedøya, Lindøya, Nakholmen, Bleikøya, Gressholmen and Langøyene. These ferries all leave from the well-marked pier in front of Oslo City Hall.

Some commuter ferries also link Oslo with Nessoden and other towns further down the Oslofjord. You'll find these from a neighbouring pier closer to Aker Brygge. These ferries will require at least a two-zone ticket.

There is also a summer-only tourist ferry shuttle from the City Hall to Bygdøy. This used to be part of the public transport system and was covered by regular tickets. However, this ferry now has a separate ticketing system and is not covered by a regular transport ticket.

How much does public transport cost?

One thing that makes travelling on Oslo's public transit easier is the ticketing system. Regardless of which mode of transport you choose, you only need to buy one ticket. This is the case even if you are connecting from metro to bus, tram to metro, or any other combination.

Ruter sets the pricing and has recently streamlined its charges into a simpler zonal system. The prices for valid for all buses, trams and local trains. The whole city of Oslo falls into Zone 1, ensuring you know what you will pay, wherever you are going.

Current prices for travel within Oslo

Here are the latest prices for a single ticket. Each ticket lasts for 60 minutes and is transferrable. This means you can use two modes of transport to complete your single journey, as long as you complete it within one hour.

Please note: These prices were last updated in November 2019 and are valid for Oslo only. Travelling beyond the city limits is more expensive. Seniors (67+) and children (under 16) pay half.

For Oslo residents, I do not recommend buying the yearly ticket despite the price saving, because if you lose it, you're stuffed! Plus if you spend a lot of time away from the city and are clever with planning monthly ticket purchases, it's unlikely to save much over the year.

From personal experience, I find the 30-day ticket to provide the best balance of value and convenience. But of course, it's up to you!

For tourists spending more than two days, the 7-day ticket offers the best value. If you're planning to visit a lot of attractions, you could also consider the Oslo Pass. This includes entrance to many attractions as well as including all public transport.

Public transport in Oslo runs mainly on the honour system. However, checks (called kontroll in Norwegian) are common, yet random. Some locals claim they never get “controlled”, whereas others complain it happens on a weekly basis. The best thing to do? Buy a valid ticket!

If you buy a senior or children ticket, you might be asked to prove your age.

Sometimes inspectors step onto the bus or tram, or they could be waiting at stations. This is especially common in the city centre metro stations. If you cannot present a valid ticket when challenged, you will be heavily fined. At the time of writing, the fine is 1,150kr. That fee is reduced to 950kr if you pay immediately.

31 thoughts on “Public Transport in Oslo”