Skip to content
Home » Travel » Travel News » The Train to Tromsø: A Railway for Northern Norway? 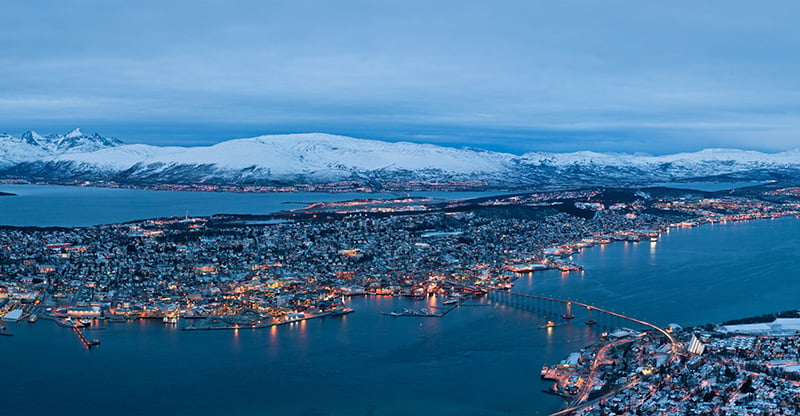 A train link to Tromsø has been talked about for decades. Now once again authorities are looking at the feasibility of a railway in the north of Norway.

At the moment Norway's rail network goes as far north as Bodø. There is a track from Narvik leading east onto the Swedish rail network, but this isn't connected to the Norwegian network.

This means the vast majority of people travelling from south to north or vice-versa have no realistic option but to fly. Goods must be sent via plane or a lengthy journey by ship or road.

An ambition stretching back 100 years

Politicians have floated the idea of a northern extension several times in recent years, specifically to link the Nordland line from Fauske with Tromsø. In 1992, the stretch between Narvik and Tromsø was deemed viable, but the stretch from Fauske to Narvik was not.

That was just one in a long line of false starts for a railway to Tromsø. But now, the conversation is underway once more.

A new study with political support

Now, Norway's Socialist Left (SV) party say they will present a proposal for a concept selection study to Parliament. The study would involve finding out what it would take to build a railway to Tromsø from the current network at Fauske.

Earlier this year, the Railway Directorate presented a detailed report on a potential Northern Norway railway line. They put the estimated cost at NOK 113 billion.

The Progress (FrP) party, one of the members of the current coalition government, don't oppose the idea. However, a spokesperson says the cost of the project would impact other infrastructure spending in the region.

Potential routes for the Northern Railway

While the route under discussion is from Fauske to Tromsø, there are many possible ways to get there. The Railway Directorate's study looked in detail at possible routes, stops, and additional branch lines. The study is now out for consultation, so we can take a detailed look at the proposals.

Here is the proposed route map from the report:

As you can see from the map, several options are possible including a branch line to Harstad is being considered. The town is central to the Norwegian fishing industry, and there is an airport at Evenes.

The full cost of the project is estimated at NOK 113 billion. If implemented, the proposed branch line to Harstad would add another NOK 20 billion to the bill.

Of course, it should be said that passenger services on a new line would likely be secondary to the cargo operation. Although the scenery is likely to be spectacular, journey times would be long so demand from tourists would be questionable. The relatively small number of locals in the region would mean passengers numbers would remain small for much of the year.

The nine-hour journey from Trondheim to Bodø on the Nordland line currently supports two daily trains in both directions. That said, more regular local services operate from Steinkjer-Trondheim and Fauske-Bodø.

The support for the project falls into two broad categories: economic and environmental.

Venstre, Norway's Liberal party, previously said that the increase in seafood exports makes the project viable. A spokesperson claimed a fivefold increase in volumes could be expected by 2050, and that infrastructure would be needed to support that. Remember what I said about cargo being a priority!

Friends of the Earth Norway say that moving goods currently transported by road over to rail will have a positive effect on the climate. They also highlight that having less traffic on the roads would improve traffic safety and reduce maintenance costs.

While you may think everyone in the north would support the proposals, there are some who don't. The high cost of the project has left some questioning whether that money would be better spent on other infrastructure projects in the region.

There is also the genuine concern about how weather will impact the operation of the line. Keeping the track clear during the long winter months won't be straightforward.

Tunnels are the best way to keep the railway free of snow, as anyone who's taken the Oslo to Bergen railway will appreciate. The latest study shows that just 45% of the track would run through tunnels. This compares to 58% the last time the project was formally discussed. The reason for this is cost, as safety requirements for tunnels have increased in recent years. However, less tunnels on the route would increase the potential for delays.

There is also likely to be local opposition from the world of reindeer husbandry. Back in 2017, more than 100 reindeer were killed in a matter of days by freight trains on the Nordland line.

The report from the Norwegian Railway Directorate is out now for consultation. It's free to browse and download from their website.

The Directorate is not seeking to make any recommendation on the development. Instead, they will take input during the consultation process until the end of September. After a review of the input, the final report will be produced and sent to the Ministry of Transport.

1 thought on “The Train to Tromsø: A Railway for Northern Norway?”