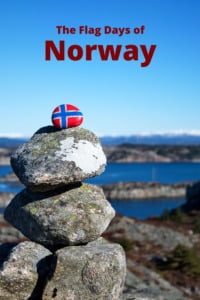 The Norwegian flag is hoisted from public buildings and private homes several times every year. Here's what you need to know about Norway's flag days.

In some parts of Norway, you may see the Norwegian flag flying proudly from buildings. But unlike in some countries, it's not typically something that's done everyday.

The most flags you'll see without doubt will be on 17th May, the Norwegian Constitution Day. But there are other days when government buildings and private civilians fly the flag. These are Norway's designated flag days.

Otherwise, they are usually used to fly the national flag. This is often done when Norway is competing at international sporting events, and also on designated flag days.

What is a flag day?

Not to be confused with Norway's public holidays, flag days are typically declared on the birthdays of a member of Norway's Royal House, on some religious-based holidays and on anniversaries of some historical events.

The flag flying days may sound arbitrary, but they are actually laid out as part of a Royal Resolution in 2004, that modified the regulations concerning the use of the state flag.

Flag days apply to all branches of government and state agencies. Civilians are also encouraged to display the national flag on these days, although participation in this practice varies.

So if you're new to Norway and you're wondering why your neighbours are flying the national flag, you might find the answer below.

The dates of Norway's flag days

The following days are Norway's designated flag days. There are both fixed dates such as historical anniversaries, and variable dates, such as religious holidays.

21 January: The birthday of Princess Ingrid Alexandra, who will one day become Queen of Norway

6 February: Day of the Sami People. On this day state institutions and civilians are encouraged to fly both the Sami flag and the national flag.

1 May: Labour Day, a public holiday.

8 May: While not a public holiday, Liberation Day marks the end of the German occupation of Norway at the end of World War II.

17 May: Norwegian Constitution Day. The Norwegian flag is absolutely everywhere on syttende mai, but don't forget to fly one from your balcony!

7 June: Union Dissolution Day. This is not a public holiday, but the flag marks the end of the Sweden-Norway union in 1905.

4 July: The birthday of Queen Sonja.

20 July: The birthday of Crown Prince Haakon, who will be the next King of Norway.

29 July: The day of Saint Olav, the former King and patron saint of Norway. The day is known as Olsok, and is the centrepiece of the annual St. Olav's festival in Trondheim.

There are a handful of flag days in Norway with variable dates. These are the dates of these for 2022:

14-18 April: The Easter vacation. Typically, the Thursday, Friday and Monday are all public holidays and the whole period are designated flag days.

There is also a designated flag day on parliamentary election days. The next one is scheduled for September 2025.