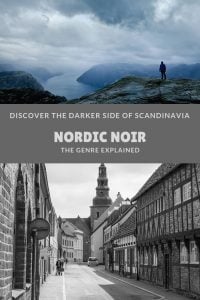 The genre of dark crime stories with bleak Scandinavian settings has a huge following around the world.

The upcoming release of Wisting based on the books by Jørn Lier Horst is the latest in a long line of Nordic noir books to receive screen adaptations.

But what is the genre all about, why is it so popular, and where should you begin? We take a look at all this and more in our guide to these very Scandinavian stories. Let's get started!

What is Nordic noir?

Nordic noir is a dark subset of the crime fiction genre. It is usually defined by some or all of the following:

And of course, the setting is always somewhere in Scandinavia or the Nordic region. While they don't necessarily have to be, most Nordic noir authors are also from the region.

Stieg Larsson’s international bestseller The Girl with The Dragon Tattoo and the other books of the Millennium series drew many people into the world of Scandinavian crime fiction, and the subsequent movies just added fuel to the fire.

Why is it so popular?

Kerstin Bergman, a researcher in comparative literature at Lund University in Sweden recently talked about three reasons for the genre's popularity:

1: “One is the very strong focus on social and political criticism. International people are often very curious about the Scandinavian welfare states and that is something that they can learn a lot about from reading these novels.”

2: “We have a very strong focus on setting. To a lot of people in the world, the Nordic landscape and nature is very exotic, with the cold dark winters and the summers with the midnight sun and things like that.”

3: “We have so many strong women characters in them and that is something that makes them unique. Like other genres, readers of crime fiction are to a very large extent women and they like to identify with these characters to manage to combine work and home life.”

Many successful novels have made the transition to the big or small screen, with varying levels of success. For every Dragon Tattoo, there's countless others that didn't make the cut. Jo Nesbø's The Snowman is a great example of a successful novel that flopped on the big screen.

The genre seems best suited to the small screen, something that's set to continue now that streaming services are throwing money at original series production.

In an interview with The Conversation, Piv Bernth – the head of drama at Denmark’s public broadcaster – said that Scandinavians deliberately studied the American police procedurals before developing their highly acclaimed series such as The Killing, The Bridge and Borgen.

There's plenty of crime stories produced in Norway. Many of them start out life as crime novels. Read our list of the best Norwegian crime books here, or read on for a summary.

Jo Nesbø: Without doubt the most famous Norwegian crime author is Jo Nesbø. Best known for his Harry Hole series that has become one of the best selling crime series in the world, Nesbø has crafted what many fans say is the ultimate anti-hero. Hole is a periodic binge drinker opposed to authority, who roams the streets of Oslo like a lone ranger, doling out justice his way. Bizarrely, like many Scandinavian crime novelists, he also writes children's books!

Check out Jo Nesbø's first Harry Hole book, The Bat, on Book Depository, Amazon.com or Amazon.co.uk, and see if you'll get hooked.

Anne Holt: Many novelists have a background in the field they write in, and one such example is Anne Holt. Her experience running a legal practice and serving as Norway's Minister of Justice is clear to see. My recommendation from her catalogue is 1222, a locked-room mystery set in a remote mountain hotel after a derailment of the Oslo to Bergen train during a snowstorm.

Check out 1222 on Book Depository, Amazon.com or Amazon.co.uk.

Jørn Lier Horst: Given the upcoming release of the Wisting series, Horst is soon likely to become a much bigger name outside of Norway. His books – which have sold over 1.2 million copies in Norway alone – are set in small-town Larvik and follow the adventures of detective and single father William Wisting. Although sixth in the Norwegian language series, Dregs was the first book to be published in English and is a good place to start.

Check out Dregs on Book Depository, Amazon.com or Amazon.co.uk.

“Some people take their secrets with them to the grave when they die, and some graves hold more secrets than others. There's one in particular in the main cemetery in Bergen, a city on the west coast of Norway. It's hidden under a rhododendron bush. You could walk right past it on the gravel path and you wouldn't know it was there.”

“There's no headstone, no cross, no sign at all identifying who lies beneath. One morning in February 1971, a small group of people working for the Bergen police huddles together in the icy rain. They watch as a white coffin is slowly lowered into the ground on this spot.”

That's the intro to Death in Ice Valley, a joint venture from NRK and the BBC that brought the true crime craze from the podcast world to Norway.

The series attempts to shed light on the infamous case of the Isdal woman, an unidentified woman found dead by hikers in the foothills of Mount Ulriken.

Co-presenter Marit Higraff joined the Life in Norway Show to chat about the case and the podcast.

The genre of course exists outside of Norway too, and some of the most famous names in the genre come from Sweden, Denmark, and beyond.

Stieg Larsson's Millennium series: The genre-defining The Girl with the Dragon Tattoo introduces hacker-investigator Lisbeth Salander and journalist Mikael Blomkvist to the world. Such is the importance of Stockholm as the setting that fans flock to the city to take walking tours to the locations featured in the books and films. While Larsson only completed three of the planned ten novels before his sudden death, other authors are continuing the series.

You can buy the wildly successful first book from Book Depository, Amazon.com or Amazon.co.uk.

Peter May's Lewis trilogy: Although not set in the Nordic region, Scotland's remote Outer Hebrides archipelago is about as close as you can get. The books tick all the other Nordic noir boxes, from the lead character returning to his place of birth following the tragic death of his son, to the wonderful depiction of the bleak islands and tough living in this part of the world.

Start with the first thrilling volume, The Black House, available from Book Depository, Amazon.com or Amazon.co.uk.

Henning Georg Mankell's Wallander: Best known outside of Scandinavia for the smash TV series Wallender, the character first came to life in the books set around the town of Ystad, in southern Sweden's Skåne region. The Wallander novels have been translated into 40 languages and have sold more than 30 million copies in 100 countries

Check out the first book in the series, Faceless Killers, on Book Depository, Amazon.com or Amazon.co.uk.

Maj Sjöwall and Per Wahlöö's Martin Beck: Step back in time to the beginnings of Nordic noir with Roseanna, the first in the Martin Beck series from the internationally renowned crime writing duo. We meet Beck hunting for the murderer of a young female traveller who is found in Sweden's Lake Vattern.

Grab your copy of the genre classic Roseanna from Book Depository, Amazon.com or Amazon.co.uk.

Scandinavia has seen a boom in tourism from fans of the genre keen to check out the locations that feature in the various books, TV shows and movies. I already mentioned the Stockholm walking tours focused on the Millennium series, but the interest doesn't stop there.

The tourism authorities in fellow Scandinavian capital Copenhagen run Nordic Noir tours focused on the locations from hit TV series The Killing, Borgen and The Bridge. The tours take place regardless of the weather, with the organisers saying, “you could say that a grey sky and rain even adds to the Nordic Noir experience.”

Ever since the first Wallander novel’s success, local authorities in the small Swedish town of Ystad began to notice an increase in visitors who came for the “Wallander experience.”

They were quick to promote the locations used in the books and TV series, going as far as creating a walking tour brochure and dedicated app for visitors.

Petra Rundqvist told The Conversation that Wallander has done wonders for selling the Ystad brand abroad. “Many people that did not know about Sweden and Skåne know about Ystad as the hometown of Wallander. It is part of our branding of the town. We also know that a lot of tourists – actually 15% – come just because of Wallander.”

The town is now home to the Detective Film Festival and Pixel, the Skane Film Festival. In just ten years Ystad has totally reinvented itself as a film hub, hosting 37 international film co-productions and almost 100 productions.

Are you a fan of Scandinavian crime fiction and Nordic noir? If so, why not share your love on Pinterest? We've got just the pin for you. Just hit the Pinterest button!

7 thoughts on “An Introduction to Nordic Noir”