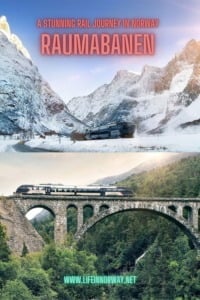 Norway's Romsdal valley is one of the country's natural beauty spots. The best way to experience it is on the scenic Rauma railway.

For millions of people all around the world, the train is a simple means of getting from A to B. While commuter trains exist in Norway, many of the county’s long distance lines double as great value sightseeing trips. Norway by train can be truly spectacular.

The Bergen line and Flåm railway are well-known tourist hotspots, but it’s another railway now getting a turn in the spotlight.

Finally getting the attention it deserves, the Rauma railway was recently named one of ‘Europe's top scenic train journeys’ by Lonely Planet. Scroll through this article to see the photos and you'll find it hard to disagree!

Norway's Rauma railways speeds past picturesque mountains through the lush Romsdal valley. You'll speed past the emerald green Rauma river and the imposing Trollveggen rock face among other highlights.

Unlike Norway's other well-known railways like the Bergen, Trondheim, Stavanger and Nordland lines, the Rauma Railway doesn't link two major cities. However, it does provide a vital transport link from central Norway to the west.

The Rauma line (Raumabanen in Norwegian) spans the 114km between Dombas and Åndalsnes. Dombås is known for its outdoor experiences and proximity to national parks. Åndalsnes is one of Norway's mountaineering hotspots.

Norway is known for its long-distance rail journeys, but a trip on the Rauma line takes just an hour and a half. However, there are only a handful of daily departures, so advance planning is essential.

While you can of course take the train either way, it's much more common to start in Dombås. That's because of the connection available to the Oslo-Trondheim railway. Departures on the Rauma line are timed to coincide with arrivals on the main line.

If you choose to get to Dombås by other means or decide to stay a while first, there isn't a lot to do in the town itself. But you should make sure to call by the charming old Dombås church.

The reason to visit Dombås is to use the town as a base for exploring Dovre National Park. Musk ox safaris are a popular tourist highlight. There's also marked hiking trails galore to explore.

I recommend a trip to the National Park Centre in the town centre. Here you'll be able to book guided trips, find out the best places to see musk ox right now, and get other handy information on the local area.

Sights along the Rauma Railway

There's plenty to see as the train makes its way through the green Romsdal valley. You can't miss the mountains!

During the short journey, you'll pass over 32 bridges including the Kylling bridge almost 60 metres above the river. Made entirely of granite, the bridge took ten years to build. This section of the railway is remarkable, built as a double horseshoe curve to enable trains to pass a steep, narrow part of the valley.

Other notable sights include the powerful waterfall Vermafossen and the world-famous Trollveggen. Known in English as the Troll's Wall, Trollveggen is said to be Europe's highest vertical mountain face. It's well known among mountain climbers around the world and is quite the imposing sight.

Are you a fan of the Harry Potter movies? If so, keep your eyes open in and around Bjorli. This was the setting for a few scenes from the Half-Blood Prince, the only ones to be shot outside of the UK.

For some of the journey, the train will hug the edge of the Rauma river, which is calm in some parts and wild in others. Watch out for jumping salmon!

During the summer, the train is almost exclusively used by tourists. At this time of year, the train stops for a few minutes in a couple of places to allow passengers to take photos.

Upon arrival at Åndalsnes, you have several choices as to how to spend your time. The area is known as a mountaineering centre, but there's plenty of hiking routes too.

The best-known hike is takes you up to the Rampestreken viewing platform 537 metres above the town. Locals love this hike and although it's classified as ‘moderate', there are steep sections that can prove challenging.

It takes about an hour and a half up and an hour back down. But if you have more time, consider carrying on to the top of the mountain Nesaksla. It will add about an hour to your overall trip, but the views are well worth it.

More serious hikers will love the challenge of the Romsdalseggen ridge. The views of the valley (including the railway line!) are nothing short of breathtaking.

Local tourist guide Hilde Gråberg Bakke explains why the hike is so special: “You will not just be going from one point to another to experience something there. The experience and the wow-sensation is with you the whole time.”

Staying in Åndalsnes is popular in a basic hotel or one of several campsites. The campsites offer simple cabins and the ones with kitchenettes are great value. The Trollstigen mountain pass is another nearby highlight, although you'll need a car to get there.

That being said, if you're continuing your journey on by tourist bus to Geiranger, you'll drive up the pass. The bus stops for 20 minutes or so at the top of the pass to allow for photos.

Geiranger itself is absolutely worthy of a visit. The spectacular Geirangerfjord is one of the finest sights in all of Norway. Geiranger, the Rauma Railway and Trollstigen form part of the so-called ‘golden triangle' in this part of Norway.

To complete the triangle, visit beautiful Ålesund. During high season, a tourist ferry runs between Ålesund and Geiranger allowing you to complete the golden circle entirely by train and bus.

What others have said

Good Housekeeping called the scenic route “one of the most breathtaking rail experiences in Europe.”

Great Rail Journeys praised the “breathtaking views” on the trip: “Another particular highlight of this scenic line is the Verma Waterfall which passes like a crystalline stream below the train and into the valley beyond.”

Although it's possible to complete the golden triangle by public transport, I recommend using a car to get the most out of your trip.

If you're just focused on the Rauma railway (and that's perfectly fine!), it's very easy to complete a roundtrip from Oslo by taking the Trondheim line to Dombås and changing there onto Raumabanen.

You can do the roundtrip from Oslo in one day, but it's a long one. Leaving Oslo at 8am and arriving back in the capital at 8pm would give you one hour in Åndalsnes itself. You can arrive back in Oslo two hours later for an extra two hours in Åndalsnes.

I would suggest it's worth spending a night in Åndalsnes so you're not rushing about. This would also give you the time to enjoy the hike to Rampestreken.

As with all train travel in Norway, booking tickets at least a week in advance gets you the best price. Using Vy.no, you can book through-tickets from Oslo (or Trondheim) all the way to Åndalsnes. 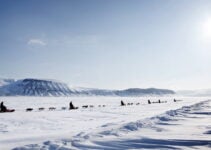