Skip to content
Home » Travel » Cruises » Day 1: All Aboard! Boarding the Hurtigruten 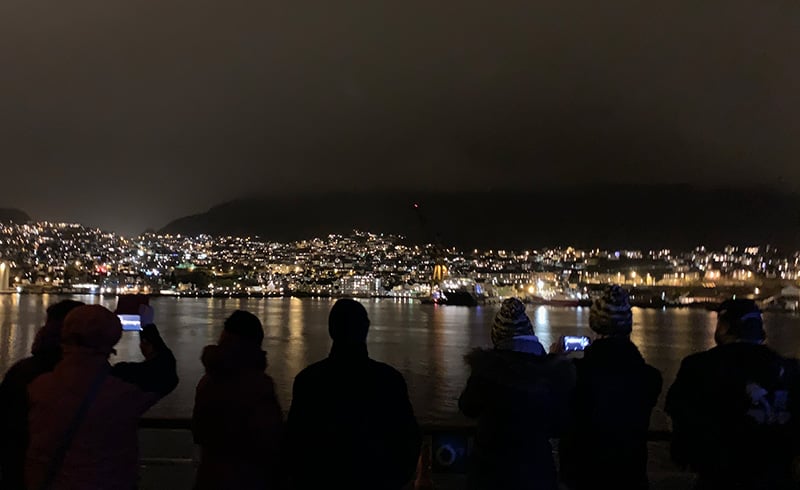 Hurtigruten Diary Day 1: My first impressions after boarding the vessel in Bergen for the 12-day voyage.

All aboard! I'm writing this from my cabin on the MS Vesterålen, the second oldest ship in the Hurtigruten fleet. We have just left Norway's second city to start the famous 11-night coastal voyage from Bergen to Kirkenes and back again.

I'll be publishing daily blogs from the ship, but if you're interested in hearing all the stories in much more detail, I'm writing a book about my journey. Sign-up here to be notified as soon as it's launched!

Before I talk about the boarding process and my first impressions, I want to introduce my trip in a little more detail.

Why I chose to travel in the winter

The main reason is that winter in Norway fascinates me. While I've taken the odd trip to northern Norway in the winter, I haven't fully experienced the darkest time of the year for longer than a few hours.

You might wonder what I'll be able to see from a ship sailing through parts of the country that will be in polar nights, but the nice thing about the Hurtigruten is that it sails close to shore throughout (almost) its entire journey and makes many port stops, so you are rarely a long way from land.

It's also of course, hopefully, another opportunity to see the northern lights.

Why I chose the MS Vesterålen

As the second oldest ship in the fleet, the Vesterålen isn't top of many people's lists. 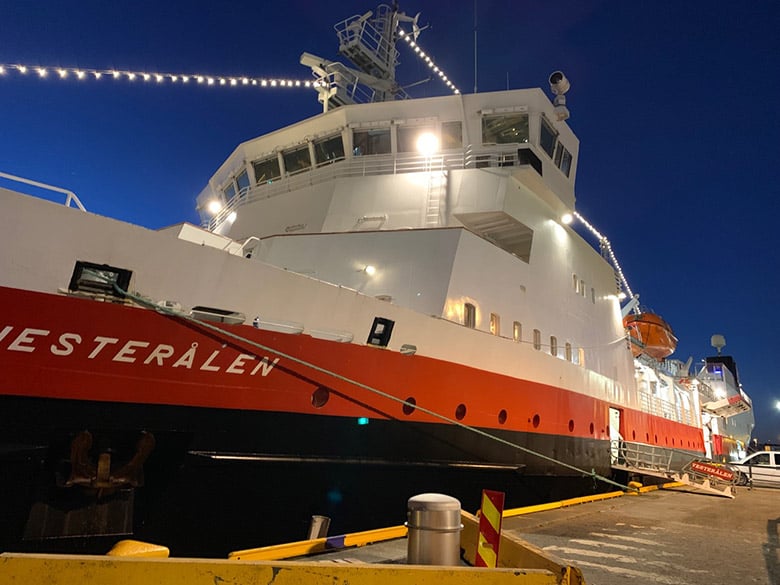 It doesn't have the historic charm of the much older MS Lofoten and it lacks some of the facilities of the more modern ships.

But that's precisely what interests me. There is little more to do than enjoy the views, meet your fellow passengers, and simply relax. I'm hoping to use the trip to enjoy some well-earned me time as well as putting in some serious writing hours.

Of course, another reason I chose the trip was the great deal I received! I managed to pick up the entire trip for under 10,000 kroner thanks to the off-season and a ‘no single supplement' special offer. 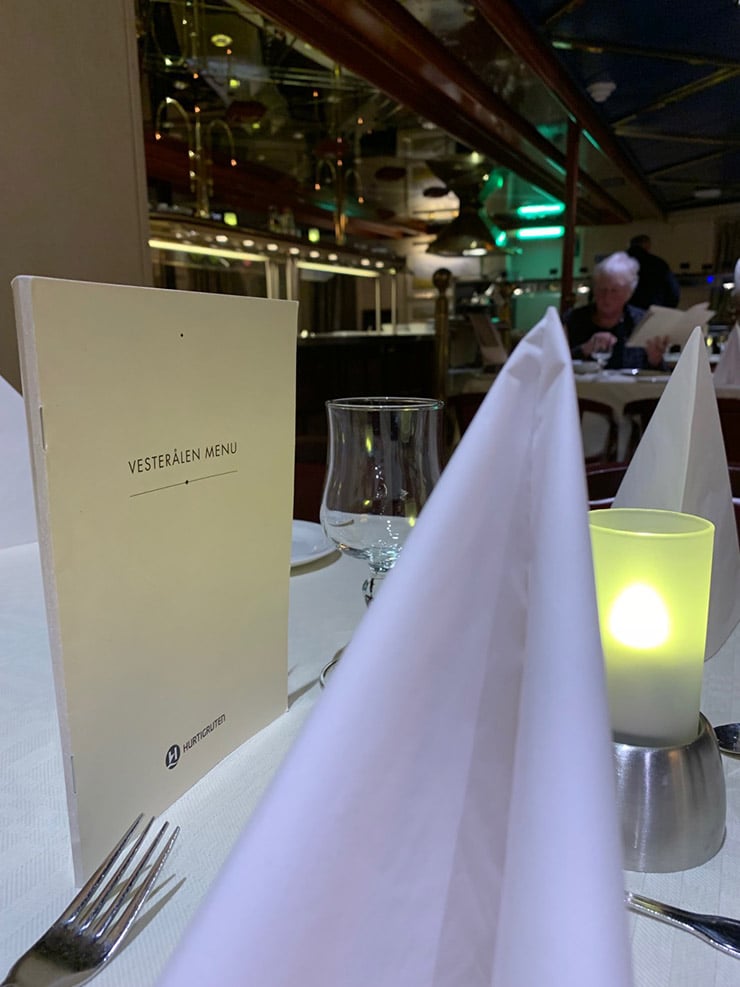 When you consider it's full board for 12 days / 11 nights, that's a pretty impressive deal, better than any hotel on the mainland.

My regular readers will know I live in Trondheim. Although I could have picked up the voyage and returned there, I feel that to give my reporting any relevance, I have to do the full trip. I certainly couldn't write a book about just part of the journey!

So this afternoon I flew down from Trondheim to Bergen to start the full voyage. In around 36 hours we'll be docking in Trondheim for six hours, but that's the life of a travel writer!

The Hurtigruten terminal in Bergen

The purpose-built cruise terminal is fairly close to central Bergen and is the only terminal on the route where you board the ship via an elevated walkway as opposed to simply walking on board. 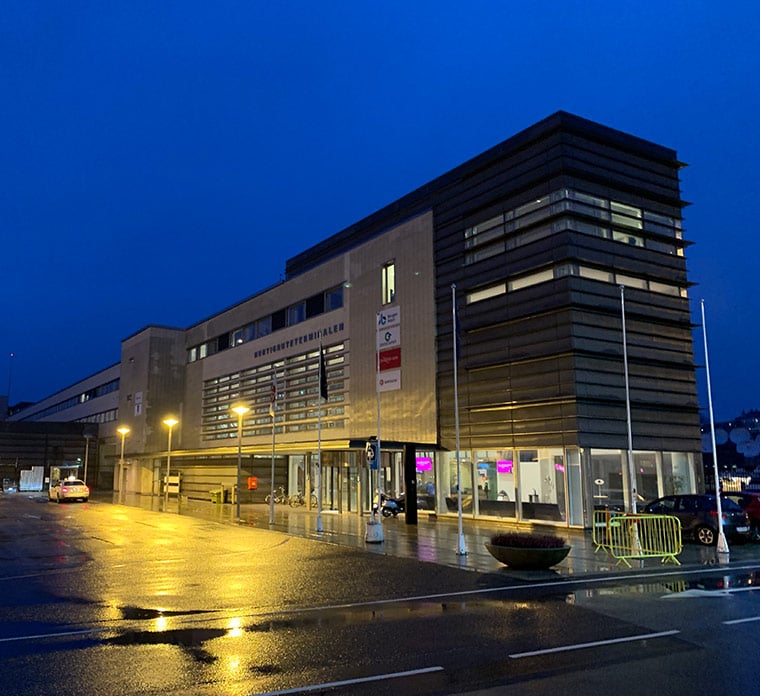 The terminal itself is more like a small airport terminal with check-in desks for you to collect your boarding card and check any large suitcases that you want taking on board. These are taken directly to your cabin.

Everyone in front of me in the queue spoke German, and the lady at the check-in desk was proficient in English, Norwegian and German. Very impressive, but as I would soon find out, that's par for the course for Hurtigruten staff. 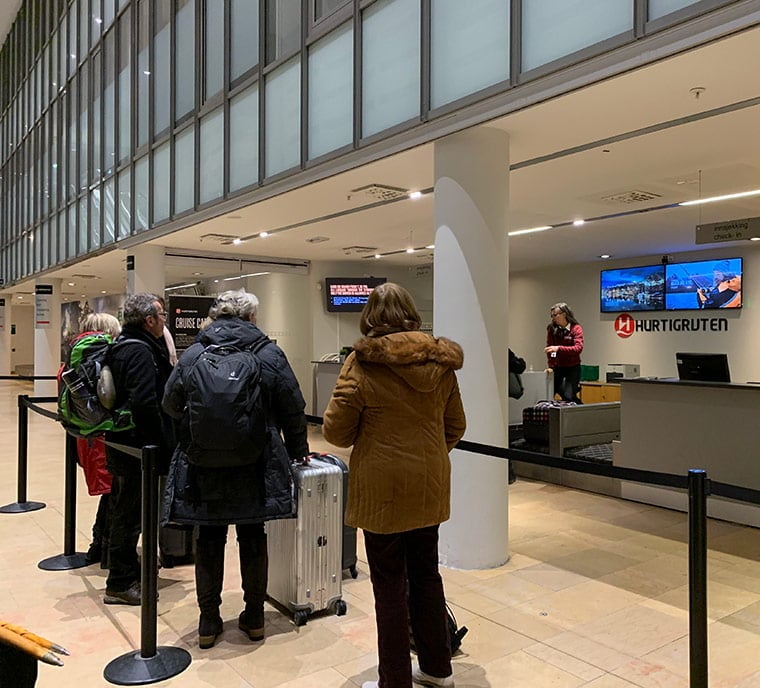 Once I was all checked in I took the escalator to the first floor and was able to board immediately. I was expecting a safety briefing, but this would take place later on the ship. Perhaps that's because of the lower passenger count of the Vesterålen? 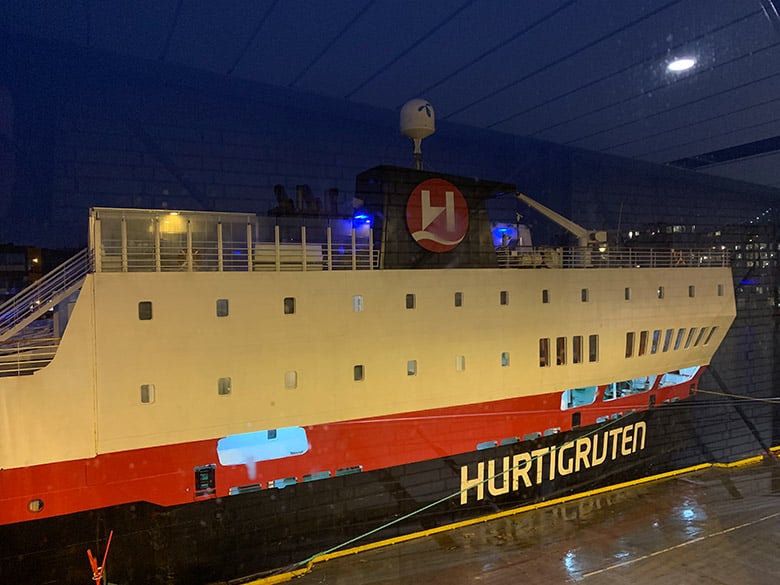 The first thing I did was seek out the reception desk and the expedition desk to introduce myself, as I've pre-arranged to record some interviews throughout the voyage. Watch this space!

After ordering a drinks package for the trip, I attended a short safety briefing and then headed to my cabin as it was ready 30 minutes earlier than expected.

My cabin is exactly what I'd expected, small but functional. Space wise, it's absolutely fine for one person, although I'm not sure how I'd deal with sharing this space with another person for eleven nights! 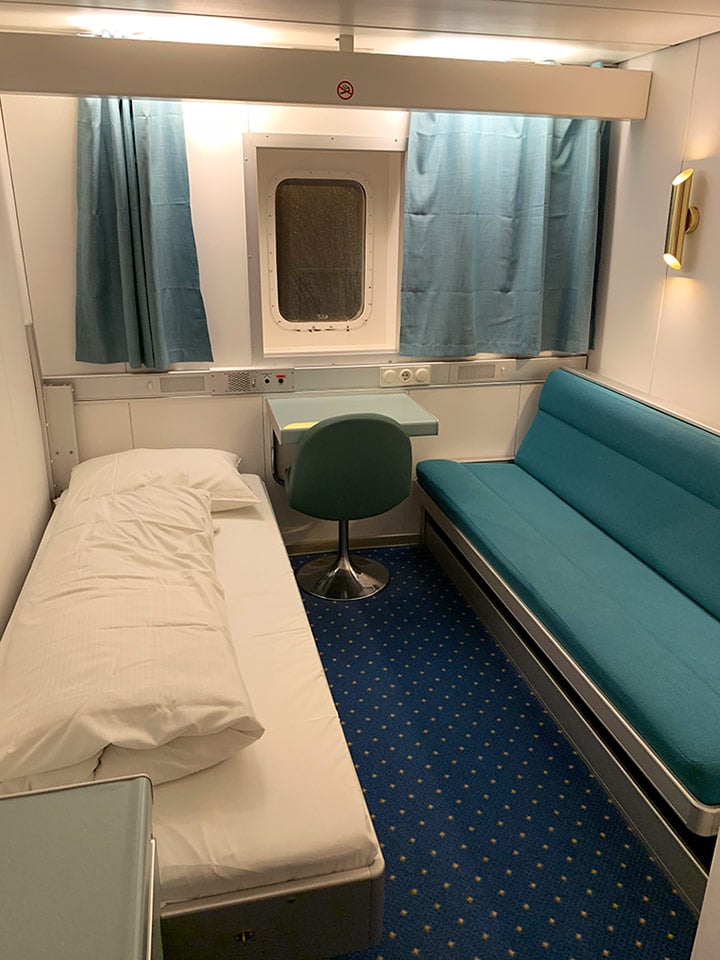 As for the ship, the decor is a little dated but otherwise it's not showing its age as much as I had expected. I enjoyed the open dinner buffet and if the quality of tonight's offering is anything to go by, the food is going to be a real highlight of the next week and a half!

I'll share more about the cabin, restaurant and the facilities on board over the coming days.

We left Bergen at 10.30pm, and many of the passengers joined me on the large outdoor deck to bid the city farewell. See you soon, Bergen!

Check back tomorrow for day two, which will be my first full day on the ship and include port calls in Ålesund and Molde. If you're enjoying these updates, sign-up here to be notified as soon as my book about the voyage is available.

In the meantime, you can help others discover this diary by sharing it on Pinterest: 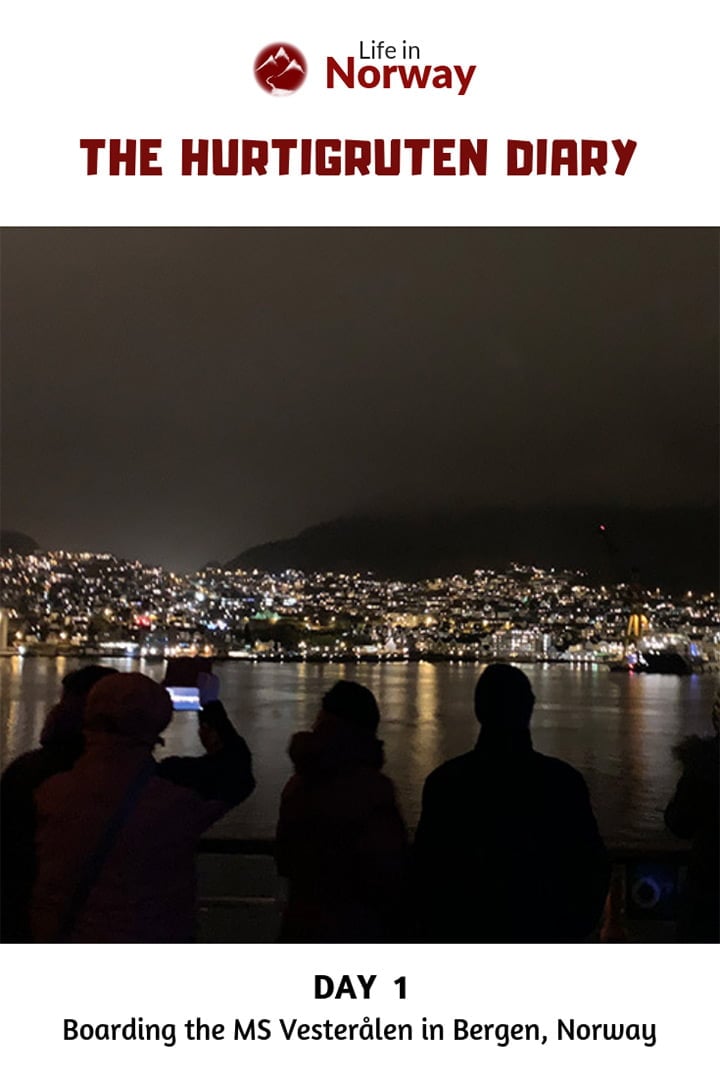 9 thoughts on “Day 1: All Aboard! Boarding the Hurtigruten”