Skip to content
Home » Living in Norway » Julebord: What to Expect at a Norwegian Office Christmas Party 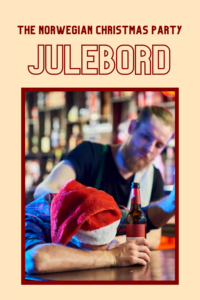 Have you been invited to a julebord in Norway? Here's your complete guide as to what to expect at the Norwegian version of the office Christmas party. Enjoy!

You don’t need to have lived in Norway very long to come across the word julebord. The julebord is as Norwegian as other holiday favourites such as gløgg, pinnekjøtt and long, dark nights.

How to prepare for such an event? What to expect? What to wear? Read on to get the dos and don'ts of this important Norwegian Christmas tradition.

The word julebord translates literally as ‘Christmas table', referring to the spread of food and drink. But the word is universally used to mean the Christmas party as a whole, in much the same way as ‘dinner party' refers to an entire evening.

The Christmas party thrown by your football team would be a julebord, as would the one organised by your chess club or theatre group.

Since a lot of Norwegian social life tends to be structured and organised around associations and clubs, it’s not uncommon for a single person to have several julebord to attend.

If you’re celebrating Christmas with a family dinner, you’ll usually refer to the event as a “julemiddag” or, when applicable, as “julaften” (Christmas Eve).

Where they take place

As we said, a julebord is organised by your employer or by a social club or association of some sort. This means the event may take several different forms, depending on the budget at the organiser’s disposal.

If money is no issue, the julebord might take place at a restaurant, and include a predetermined number of included drinks per person (see the ‘alcohol' section below for more details).

At the other end of the scale are the julebord taking place in locations that cost either very little or nothing at all (the football club’s common hall, for example).

What food to expect at a julebord

As the inclusion of the word “bord” (table) makes clear, there will be food.

There has been a trend these past few years of steering away from the meat-heavy traditional fare. This is due to many factors, not least the rise of vegetarianism and the increased popularity of foreign foods.

But it is also because, as mentioned previously, the same person may be expected to attend several such events, which makes it tempting to vary the menu a bit.

Other non-traditional but popular options for the julebord are tapas, venison and even completely non-Christmassy dishes such as taco, sushi and pizza.

Money-not-a-problem organisers will have everything organised in a restaurant or catered. Clubs or associations with more modest budgets may resort to the potluck model, where each guest is expected to provide a dish.

Alcohol at a julebord

In most cases there will be booze. Alcohol-free julebord do exist, but they certainly are the exception.

If the event takes place in a restaurant, it is not uncommon for some alcohol to be included. This usually means a predetermined number of drinks will be served either at the table, by a waiter, or at the bar.

In the latter case, the accounting for this is done with the help of tokens or tickets for free drinks. If you want anything extra, you’ll have to pay for it yourself. At the other end of the scale, everyone brings their own alcohol.

Most often, the event falls somewhere in the middle. A welcome drink is served (very often gløgg but sometimes an alcoholised punch or a glass of bubbly) and the rest is very much BYOB.

If you would have asked me if heavy drinking was a common occurrence at office parties before I moved to Norway, I would have said yes. The difference after living here for several years is that my definition of “heavy drinking” has shifted quite a lot.

While it certainly isn’t very common, it is not unheard of to witness people blackout completely, or lose control of most motor functions. These incidents are usually not spoken of afterwards.

If drinking is not your thing, you can abstain completely or just drink sensibly. Be prepared for questions and comments though if you choose to drink sensibly.

People tend to more readily accept that someone abstains entirely. Overt or implied, real or imagined, you may feel some drinking pressure.

Drinking and driving is very frowned upon in Norway, even if you’re quite certain that you haven’t had enough to exceed the legal limit.

If you are drinking any alcohol at all (even just the one drink), it is expected that you have prepared your trip back home – either arranged for someone to pick you up or planned for a taxi.

What to wear to a Norwegian Christmas party

Norwegians tend to be very casual in the way they dress at work. Hoodies, jeans and sneakers are not uncommon. Don’t be fooled though: when the time comes to party, they will dress up.

This is a generalisation, of course, but people do tend to dress up at parties, especially office parties. This often means shirt, tie and jacket for the men, and a long or short dress for the women.

If you’re not a wearing-a-suit kind of guy, you can get away with wearing just nice trousers and a shirt. But be warned: if you show up in jeans and a t-shirt, you will stand out.

This is an area where there is a lot of flexibility. Obviously it would be strange if you left before the dinner was over. And you should probably stay for the coffee and cakes (if applicable).

But other than that no one will bat an eye if you leave early. Sure, they may try to convince you to stay – if you make a point of letting them know that you’re leaving. You are likely not to be the only one leaving early, so you can always seize the occasion as soon as you see someone go.

If you want to stay until the very end, be prepared to go on an all-nighter. If the venue closes, the party will move to a bar or a private home for the last few irreductibles. Of course you can do like most people and leave around one or two.

Should you attend a julebord?

Whether or not you enjoy parties, or whether or not Christmas is your thing, it would probably be a good idea for you to show up to the office Christmas party.

The reason for this is that drinking with Norwegians is a very good way to get included in the group.

If you’re reading this article, chances are you’re a foreigner and you’ll need all the integration opportunities you can get – at least in the beginning.

If we’re talking about a julebord for a sports team or an association, then you clearly have already made efforts towards your own integration and you can probably do as you please.

Tell us about your experience

Have you had the chance to attend a Norwegian julebord? Tell us about your first impressions in the comments! If not, how are office Christmas parties where you live?