Overdosing on crime fiction, the last ski trip of the season, or a first chance to get some sun: This is easter in Norway.

Then, the Saturday of easter weekend (påskeaften) precedes Easter Sunday (påskedag or første påskedag). The final public holiday of the period, Easter Monday is known as andre påskedag.

Many Norwegians take the entire week off in the run up to the easter weekend. But how do they spend their time? Let's find out!

The easter vacation in Norway

I've never been that fussed for easter. Back in the UK, it was never anything more than one or two days off work, an excuse to eat some chocolate, and perhaps a chance to see some extended family.

Read more: Easter 2020 in the time of coronavirus

But here in Norway, easter is a big deal. In many ways, it reminds me of the big July shutdown. Most people will have three days off work (Thursday, Friday, Monday).

Banks are closed for those three days, which means payments made online on Wednesday night won't clear until the following Tuesday!

But three days isn't enough for most Norwegians, who use the opportunity to get one or two weeks off work for less of their vacation allowance. But what exactly does everyone do with their time off?

Easter is of course a christian holiday, commemorating the christian belief in the resurrection of Jesus from the dead. As the time that explains the core of the christian faith, easter is considered the year's primary festival.

Special services are held throughout the period. In the church of Norway, Palm Sunday is celebrated in memory of Jesus' entry into Jerusalem. Some churches hold group walks in addition to services.

While the period is marked by several religious days and services, Easter Saturday (påskeaften) is regarded as a sort of ‘rest day'. Shops are open and a large family dinner is common. It's also the day children tend to be given chocolate eggs!

That being said, many churches begin celebrating easter late on Saturday evening at a service called the Easter Vigil (påskevigilien).

What's on a Norwegian table at an easter family gathering? While there is no must-have meal, roasted lamb is a popular choice alongside simple sides of potatoes and other vegetables.

Citrus fruits are some of the more surprising things to find in a Norwegian house over the period. Oranges including tangerines and clementines are an important part of the season for many. In fact, the average Norwegian eats four pieces of citrus fruit during easter week!

Are you a beer drinker? Known as juleøl, christmas beer is incredibly popular in Norway during December. At this time of year, påskeøl (easter beer) is available although it doesn't seem as popular as the winter variety.

A Norwegian easter is all about the colour yellow. Dandelions and daffodils bloom in the early spring and are commonly found on easter tables.

But it's not just about natural decorations. In the run-up to the season, shops are full of yellow, well, pretty much anything! Candles, napkins and fluffy chick toys are among the items you'll find.

The Norwegians I know are split right down the middle on this one. The traditionalists head to the mountains to enjoy the last opportunity of the year to get some serious skiing in. Cross-country of course.

Of course, with skiing comes Kvikk Lunsj. Norwegians eat more of their beloved chocolate covered four-finger wafer at this time of year than any other!

However, the dates of easter move each year, so depending on this and the weather conditions, it may be a little too late to ski.

First chance for some sun

Prior to the health crisis of 2020-21, more and more Norwegians were heading southwards to enjoy some desperately needed sunshine.

Under normal circumstances, the choice of destinations from Oslo Airport is dazzling. Popular destinations include southern Spain and Turkey. The latter is gaining popularity as a year-round destination from Norway.

For the second consecutive year, Norwegians have been asked not to travel for the påske vacation. Fingers crossed that things will return to normal for 2022.

Back in my first year in Norway, I was riding the Oslo T-Bane to work with a Dutch colleague of mine. He had lived in Oslo for many years. Our conversation drifted towards easter and I asked him if there would be a lot of films on the TV.

He then launched into an explanation of the bizarre Norwegian love of crime fiction over the easter period. I paid little attention to this, until I saw a crime novel display in the window of Ark, a popular chain of bookshops.

I checked other bookshops and sure enough, each one had a massive display of Easter crime (påskekrim) books on offer, on a scale you'd expect of travel books in the summer, or Jeremy Clarkson books at Christmas time. There's even short story collections brought out every year from Norway's biggest crime writers.

Speaking to a few other Norwegians and a couple of expat bloggers confirmed it. Yes, Norway goes nuts for crime every easter.

It's not just in print either. Back in my first year, national broadcaster NRK showed episodes of Whitechapel and Lewis throughout Easter week, along with German show Derrick.

If you preferred films, then TV2 Zebra's Grøsserpåske was for you. Every night horror movies and thrillers filled the schedule. I remember seeing Like Minds and the hilariously bad Død Snø (Dead Snow) featuring nazi zombies. NRK3 showed Hairspray. That's a crime in itself. In the years since then, it's been a similar story.

A gathering of geeks

But the Norwegian Easter is not just skiing vacations and crime novels. There's also something for the geeks!

Held every year in Hamar, a few hours north of Oslo, is The Gathering! One of my regular readers described it to me in a Facebook conversation:

Several hundred young people (mostly 15 – 25 yrs old) comes here to Hamar every year to sit together in a large sports hall just doing computer things! All have their computers with them and they play games, get to know each other etc. And they do this for about the whole easter 24/7. When they don't to computer things they eat junk food or sleep in a corner. every year they get more data capasity than the year before!

They even hold a ‘Nerd Swim'. To many of you, The Gathering will sound awful. The nerd in me think it's great 🙂

Once again, this is on hold for the second consecutive year. Fingers crossed it will return in 2022.

Much of Norwegian life is built on tradition and Easter is no exception. It seems there is a tradition for everyone at Easter time! 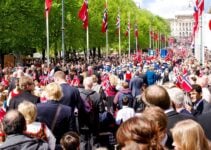 6 thoughts on “Easter Traditions in Norway”