Discover what it's like to move to Norway and study at university. From finding a place to live to learning Norwegian.

Tucked away in arctic Norway, sits the coastal town of Bodø. In the summer months, the town gets almost constant daylight; in the winter, the opposite is the case and the sun rarely breaks above the horizon. Bodø has a population of just 52,000, and living there, dealing with such extremes, can be a challenge even for the locals.

In August 2017, Nia Chunashvili got accepted onto a Science in Business master’s degree at Nord University in Bodø. She packed her bags and moved to Norway from her native Georgia (the country, not the American state) full of excitement and hope.

Nia has, in large, found it to be a positive experience, but it hasn’t been without its difficulties. I caught up with her recently and asked her about her experiences of living in Norway's frozen north. She told me about her studies, the dreaded job hunt and her Norwegian language lessons. Here is what she had to say.

Why did you choose to study in Norway?

I really wanted to study a master’s programme in English. Also, I have a friend who had studied at university here and he told me only positive things about Norway. It was a bonus that the education here was free here, that it would not cost me anything, I think this is unique.

But also, Norway is a very safe and peaceful country to live in. It's quite different from Tbilisi in Georgia in that respect, which is a very busy and congested city. As nice as it was to be in peaceful Norway, it definitely took some getting used to.

How does studying at a university in Norway compare to Georgia?

The universities in Norway are modern, well maintained, but it is difficult to make a direct comparison. Since I graduated from university in Georgia in 2008, education has changed a lot and they have made many improvements to university study programmes.

I find the teaching standards in Norway to be very high. I like how you are encouraged to think independently and to develop your own mindset. You have to think outside of the box, not just to the edge. I found this rewarding because you do feel a greater sense of achievement when you finish an essay or an assignment.

What are the best and worst things about university in Norway?

The best thing is that I learnt how to write a thesis, which was different to how they do it in Georgia. I was not used to the Norwegian way of doing things. For example, a teacher would give you a homework, where you are expected to research and get a lot of information before writing the assignment.

This technique was really new for me. These assignments were like a short thesis, with an introduction, a short literature review and method ect. I was not used doing things this way. I think after I had the research and methodology classes everything became clear, but before I was really struggling.

The worst? I can’t really answer that. I’m not sure there is anything I dislike that much about studying here. Can I say the weather!?

How have you dealt with the climate in Bodø?

In my first semester here, it was a big shock for me. The climate was a surprise because I’m from a warm country where so much rain and really cold temperatures don’t happen so much. When I arrived, the first week’s weather was just rain, rain, rain.

I did have an idea of what to expect with the weather before I moved here, but it still wasn’t prepared for that first Norwegian winter in the arctic circle. Dealing with the snow was new for me, but on the positive side it does brighten the town when it is dark.

The light, which in winter there is very little of, I was surprised by this the most. And I still don’t think I’m used to it, but you do adjust, a little. Then, in the summer, too much light is the problem, making it difficult to sleep at night. It definitly pays to have good blinds or curtains!

How was it looking for work in Bodø?

Finding a job in Bodø was one of the most difficult challenges I faced when I moved here. Because I was a student, it is no problem to work part time (20 hours per week), but it was tough because I didn’t speak Norwegian and this made things very hard.

But I got lucky and found work in an American burger restaurant, but it took me many months to get that position. I definitely think it pays to network, to get to know people and talk to them. This helps a lot and opportunities will usually open up from these connections.

That’s how I got my new job – a friend was leaving her job as waitress at the end of July, and she put my name forward for the position and I got it. So this shows how it can work.

How does your life look at the moment?

I’ve finished my master’s studies. Right now, I’m studying the one-year Norwegian language and culture programme at the university. I try to practice my Norwegian as much as I can, and I’m still working as a waitress. I’m enjoying the last of the good weather before the cold and dark arrives again.

Do you have any tips for people who are considering moving to Norway to study?

If you like spectacular scenery and beautiful nature you will love Norway. I often just stop and gaze at the snow-topped mountains – I think how lucky I am to be here. It doesn't matter what season it is there is always breathtaking surroundings.

I would say, learn Norwegian as soon as you can, it will improve your chances of finding a job. Also, network and make friends, it’s important to be sociable and outgoing, both for professional reasons and for your own mental wellbeing.

That leads me onto the weather – be prepared! Try to bring adequate clothing and in particular good, weatherproof coats and shoes. 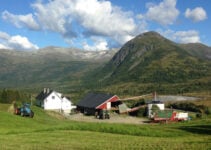