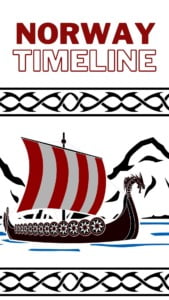 Norwegian history in a nutshell. Discover the key dates and events in the long history of Norway with this handy timeline.

Modern Norway has only existed as a truly independent nation since 1814. But the history of the land is a long and fascinating one. Many people know about the Vikings and the oil age, but there are so many more stories to tell.

From living off the land and ocean long before the Viking Age to the complicated unions with Denmark and Sweden, this Norway timeline outlines everything you need to know about the history of Norway.

Norway's history has long been influenced by both the terrain and the Scandinavian climate. Most of the Scandinavian land mass has been covered by ice at least three times. Here are the key dates we know about:

10000 BC: Humans arrive in Scandinavia from the first time, attracted to the Norwegian coast by the good conditions for sealing, fishing, and hunting. They arrive from the south, but also from the northeast.

8000 BC: Nomadic groups begin to settle as the ice recedes along the entire coastline.

4000 BC: Farming begins along the Oslofjord at the start of the Neolithic period. Tools and techniques arrive from southern Scandinavia.

3000 BC: The era of the fascinating Scandinavian Battle-Axe culture in coastal areas of Norway and Sweden. A recent research study suggested individuals have ancestry from the Pontic–Caspian steppe herders, with components originating from hunter–gatherers and Early Neolithic farmers. This means there was migration into Scandinavia.

2800 BC: Agriculture and farming modernises and spreads across the country. Oats, barley, pigs, cattle, sheep and goats are now commonplace.

The Bronze Age in Norway

The copper and tin in the bronze from the Bronze Age came from people far away. Globalisation was now a thing for the first time. As a maritime society, scholars have suggested this could have been a mini-Viking Age.

1700 BC: The beginnings of the Early Bronze Age, triggered by the import of both metals and culture from central Europe.

1100 BC: The transition into the Late Bronze Age. People maintained close trade links with Mycenaean Greece, and became expert metalworkers. The number and density of metal deposits saw wealth develop.

The transition into the Iron Age is marked by change. A changing climate caused a dramatic change in the flora and fauna leading to migration southwards.

Also, the expansion of Hallstatt culture from the south caused cultural shifts. Northern Iron Age culture was likely spearheaded by speakers of Germanic languages, long before the Viking Age came to the fore.

500 BC: This period is often referred to as the “Findless Age” due to the lack of archaeological evidence, consistent with a drop in population.

100 AD: The Roman Empire begin to exert pressure on the Germanic tribes throughout Northern Europe. This period became known as the Roman Iron Age. Significant trade took place, with coins, vessels, glass objects, buckles and weapons all making their way into Scandinavia.

250 AD: Germanic tribes that settled north of the Black Sea begin to influence Scandinavia. For example, the use of runes is seen for the first time. Sami people begin to settle in the north of Scandinavia. How far south they lived is debated.

450 AD: Scandinavians return to the region with silver and gold from the Roman Empire. Trading in such luxury goods begins to increase.

The Viking Age in Norway

An era of exploration and expansion. Yes they were warriors, but the Norsemen of the time also created social institutions, oversaw the conversion to Christianity and left a big impact on European history. A full Viking timeline is here, but read on for some highlights.

Read more: Why Did The Viking Age Begin?

793 AD: Widely accepted as the “beginning” of the Viking Age, the raid on Lindisfarne was the most notable of the early attacks on the British Isles.

830 AD: Norway's Oseberg ship discovered near Tønsberg was buried around this time. It's known as the finest artefact to have survived from the era.

872 AD: Icelandic historians believe Harald Fairhair (Harald hårfagre) became the first King of Norway. He is said to have unified Norway following the Battle of Hafrsfjord, commemorated by the famous swords sculpture of Stavanger.

900 AD: Battles continue in Britain over land and power, while Viking sail into France and along the Mediterranean.

981 AD: Expelled from Norway and Iceland, Erik the Red settled in Greenland with 25 ships, people and goods. More than 3,000 Vikings were said to be living on Greenland as farmers at one point. Vikings also discovered Newfoundland after being blown off course on a voyage to Greenland.

1030 AD: Norway's Christian King Olav Haraldsson was defeated in the Battle of Stiklestad. Churches and shrines to Saint Olav were built in his honour across Europe. However, some historians doubt the authenticity of the battle.

Many chieftains feared that Christianity would rob them of power, so it took centuries for the new faith to be fully accepted. For many years people adopted both as a form of “insurance policy.” For example, carvings in some of Norway’s oldest stave churches feature figures from Norse mythology.

1100 AD: Population increased drastically. Many farms were divided into smaller plots of land, with some landowners turning over their land to the King or church during tough times.

1130 AD: After almost a century of peace, ambiguous rules of succession led to a civil war.

1349 AD: Many communities were entirely wiped out as the Black Death arrived in Norway. The disease killed a third of the population within a year. The subsequent drop in tax income weakened the King so the church became more powerful.

1360 AD: The Hanseatic League took control of a lot of international trade via its establishment in Bergen.

1397–1523 AD. The Kalmar Union was a personal union between Norway, Denmark and Sweden – which at the time also included much of modern Finland – under a single crown.

1524–1814 AD. The Kalmar Union dissolved, but Norway remained in a personal union with Denmark. While the crowns were united, the two countries retained their own laws, currencies, and militaries.

1814 AD. The signing of the Norwegian constitution at Eidsvoll. However, nationalistic aspirations were frustrated by Sweden's victory in a brief war.

1814–1905 AD. Norway entered a personal union with Sweden. The countries shared a common monarch and conducted a common foreign policy.

1914-1918 AD. Norway remained neutral during World War I, but wielded influence through trade and diplomacy.

1940-1945 AD. Norway was occupied by German forces for much of World War II. The country played host to some key moments, including the Heavy Water War.

1952 AD. Oslo decided to put its name forward for the 1952 Winter Olympics to show the world they had recovered from the war. 694 athletes from 30 nations participated.

1966 AD. The first oil exploration well was dug in the North Sea. Oil was discovered within a year, but it was not thought to be economically viable.

1969 AD. Initial oil exploration in the North Sea had proved disappointing until the Ocean Viking discovery. This find in what would become known as the Ekofisk field kick-started a new economic era for Norway.

1972 AD. The Norwegian government creates Statoil, which would later become Equinor. Building up Norwegian competence and participation on the Norwegian continental shelf were the primary aims. The government of Norway remains the largest shareholder today.

1972 AD. 53.5% of Norwegians voted “no” in a national referendum on joining the European Community (EC). Following the result, Norway's prime minister resigned.

1990 AD. Norway's Parliament passed a law to establish the Government Petroleum Fund. It was designed to invest the surplus revenues from the petroleum sector, and would go on to become the world's largest sovereign wealth fund.

1992 AD. Norway once again held a referendum on European membership, this time to the EU. The “no” side once again prevailed taking 52.2% of the vote on a turnout of 88.6%.

1994 AD. Norway once again hosted the Winter Olympics. This time, the eyes of the world fall on Lillehammer. 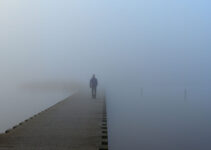 4 thoughts on “Norway Timeline: A Journey Through Norwegian History”