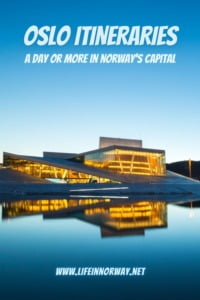 Planning a trip to Norway? Here is an Oslo travel itinerary for one day in the capital, and some suggestions for a longer stay.

The Norwegian capital Oslo is one of Europe's fastest-growing cities. As such, it offers an ever-expanding list of cultural attractions to tempt travellers heading for the fjords to spend some extra time in the city.

Historic buildings stand side-by-side with modern architecture. Some of the country's best museums and a growing list of art attractions are also part of the city's cultural draw.

We're not quite back at the time when travel to Norway is easy yet. But with progress being made, we can at least start thinking about travelling again. So, with that in mind, let's start with the capital city.

How long should I spend in Oslo?

This is a tough question to answer, as everyone's preferences and expectations are different.

Most international travelers bound for the fjords will touch down in Oslo. The city now has enough to insist that everyone should spend at least a day exploring the capital before exploring the rest of Norway.

Short on time? Even a simple city break will still introduce you to Norwegian nature. The city is surrounded by water and forest. In the summer there are awesome hiking, biking, and boating opportunities. In the winter, you are never more than a 20-minute metro ride from a cross-country skiing trail.

An extended stay in Oslo puts you within easy reach of great cities such as historic Fredrikstad or sporty Lillehammer. Both are worthy of a day trip from Oslo if you’ll be staying more than a couple of days.

To take in the city’s top attractions, visit the museums of Bygdøy, and explore at least some of the outdoor possibilities, allow three full days.

Tough choices will need to be made for those of you spending just a day in Oslo. Personal preferences are important here, so there is no one “correct” itinerary for a single day. That being said, here's my suggestion.

Enjoy a coffee and pastry from one of the coffee shops at Oslo Central Station and take the short walk past the new library to the roof of Oslo Opera House to enjoy your breakfast with a view.

From the sloping rooftop it’s easy to spot the gleaming ski jump high up in the hills; your destination for later in the day. From the back of the roof you'll have a clear view of the modern Barcode and Sørenga developments, part of the ever-changing look of the Oslo waterfront.

From Jernbanetorget square in front of Oslo Central Station, pick up Karl Johnas gate, Oslo's main pedestrian thoroughfare. This will lead you through the buzzing downtown commercial areas, past the Parliament building, National Theatre and eventually to the Royal Palace.

Here you have a choice. If you don't mind more walking, wander through the pleasant Royal Palace Gardens (spot the sculptures!) and onto Hegdehaugsveien. This upmarket retail street leads onto Bogstadveien and to the transport interchange at Majorstuen.

Alternatively, pick up the T-Bane (metro) at the National Theatre for a quick ride to Majorstuen! There's several cafes in the area that make a good choice for a light lunch, which you could take after the next stop.

From Majorstuen, it's just a short walk to Vigeland Sculpture Park. Plan to spend about one hour here exploring the more than 200 sculptures in bronze, granite and cast iron by Gustav Vigeland.

After lunch in Majorstuen, hop back on the T-Bane and enjoy the views of suburban Oslo as you climb the hills to Frognerseteren, where the views get even better. Stop off at the mountain lodge of the same name for a coffee, or lunch if you prefer eating later.

Take a 20-minute stroll down through the forest to the impressive Holmenkollen Ski Jump. Climbing the tower and visiting the ski museum are optional extras, but it’s the views from here that are the main attraction.

The metro from Holmenkollen station will take you all the way back to Jernbanetorget at Oslo Central Station.

Enjoy an evening meal at one of the many restaurants at Aker Brygge before a stroll along the waterfront. It's a great place to people watch with an ice-cream. Alternatively, the Grünerløkka neighbourhood has some livelier options especially if you want an after-dinner drink.

If you have the luxury of a second day, my recommendation is to spend the entire day exploring the museums of Bygdøy. There are several options, but even exploring just two of them fully will take most of a day.

Bear in mind that the Viking Ship Museum will shortly be closed for a major renovation. Until it reopens in 2025 as the Museum of the Viking Age, many tourists will be disappointed. If you are keen on the topic, check out our Viking travel guide for alternatives.

But a trip to Bygdøy is still worth it for the Norwegian Museum of Cultural History alone. My recommendation would be to include this wonderful museum into your itinerary, and then choose between the Kon-Tiki museum or the Fram museum.

The first tells the story of Norwegian explorer Thor Heyerdahl‘s epic voyage, while the Fram museum focuses on polar exploration. Both are a must for anyone interested in boats and ocean exploration!

Adding a third day into your Oslo travel itinerary? Good choice! In the summer, my recommendation would be to head out to the Oslofjord islands.

Small public ferries whisk you away from the pier in front of the city hall to the various islands in just 5-20 minutes. Choose between spending some time exploring the bigger island Hovedøya or island hopping between two or three.

I only recommend going in the summer because then you'll find kiosks open on the bigger islands. Boats do run year-round though, so it's possible to visit in the spring or autumn–if the weather in Oslo is kind! Just bear in mind that departures are less frequent outside the high season.

Depending on how long you spend out on the islands, you may or may not want to do something else. If you do, I recommend spending some time exploring the boutiques and cafes of the hipster Grünerløkka neighbourhood.

Spend any longer than three days in Oslo and you can consider some day trips. The Winter Olympic town Lillehammer is a bit of a stretch but doable if you're willing to leave early and arrive back late.

A little closer, the historic old town of Fredrikstad and the home of the Norwegian constitution at Eidsvoll are also worth considering. In the summer, Drøbak is well worth a trip.

What's your favourite thing to do in the Norwegian capital city?